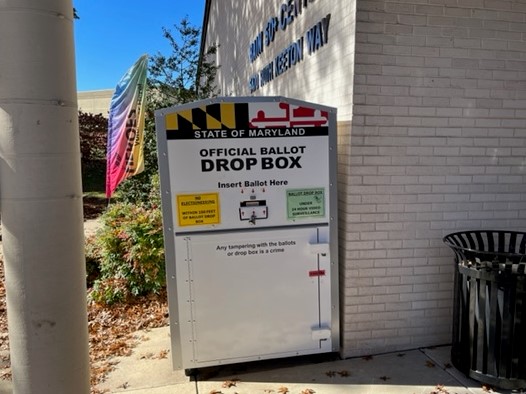 EARLY VOTING NUMBERS ARE IN: After eight days of early voting across Maryland, state officials estimated more than 350,000 voters cast ballots by the time the dozens of early voting centers closed at 8 p.m. on Thursday, and has been characterized as a steady stream of voters, but lighter than 2018 . Joel McCord/WYPR

MOORE’S FORMATIVE YEARS SPENT AT MILITARY ACADEMY: For Democrat Wes Moore, a political newcomer who has made his origin story a centerpiece of his campaign against Republican Dan Cox, perhaps no period of his life was more formative than his seven years at Valley Forge Military Academy and College. Moore’s mother sent him to military school at age 12, determined not to “lose him to the streets,” or, after a pause, “mediocrity.” Sydney Trent/Washington Post

MARYLAND’S GOV RACE WOULD MAKE HISTORY: Democrat Wes Moore is on track to accomplish something never before seen in the state of Maryland: becoming the first African American to be elected governor. He says this shows Maryland is “ready to lead.” Alana Wise/NPR

LOOK INTO CONTENTIOUS DISTRICT 9 SENATE RACE: Katie Fry Hester, a moderate Democrat who ousted Republican Sen. Gail Bates four years ago in a conservative district, is defending her seat in one of the most competitive Senate races in the state. Her opponent, Republican Reid Novotny, confidently labels himself a future senator. Sasha Allen/Maryland Matters

COMMENTARY: TOWSON UNIVERSITY PROFESSOR WRITES THERE ARE BAD CHOICES ON THE BALLOT FOR GOVERNOR: “This election I have witnessed perhaps the stupidest campaign in my nearly half century in Maryland by the Republican candidate for governor, Del. Dan Cox. Perhaps in order to acquire Trumpian support in Maryland, Del. Cox became salient to me through two disqualifying actions:  He tried to have one of the two best governors in Maryland recent history, Larry Hogan, impeached, and he called Mike Pence a “traitor.” “Richard Vatz/MarylandReporter.com

MD’S 6TH DISTRICT WILL HELP GAUGE IF THE REPUBLICAN WAVE HAS BECOME A TSUNAMI: The 6th Congressional district is a good place to gauge whether Democrats might lose the House next Tuesday, or, more realistically, by how much. Election-night returns showing defeat for incumbent Democratic Rep. David Trone could mean the anticipated Republican wave has become a tsunami. Charles Lane/Washington Post

44% OF U.S. POPULATION COULD SOON LIVE IN STATES WHERE RECREATIONAL MARIJUANA IS LEGAL: Midterm voters in five states will determine if they should join the growing list of places where recreational marijuana use is allowed, even as any use of the drug is still illegal under federal law. Referendums to legalize recreational use of marijuana are on ballots in Maryland as well as Arkansas, Missouri, South Dakota and North Dakota. Jacob Fischler/Maryland Matters

CANDIDATES VIEW COMPTROLLER POSITION DIFFERENTLY: While Republican candidate for comptroller Barry Glassman sees the role of Maryland’s chief financial officer as a nonpartisan check on a government run mostly by Democrats, his opponent Democrat Brooke Lierman said she hopes to use the position to advance values she feels are shared by most residents. Jenna Portnoy/Washington Post

FORMER MoCo ELECTIONS CHAIR CALLS FOR INVESTIGATION INTO COMMENTS ABOUT LATE VOTING: The former chair of the Montgomery County Board of Elections, a Republican, said recent statements by a top campaign aide to attorney general candidate Michael Peroutka sought to cause havoc and are worthy of an investigation by the state. In a video, at a Republican rally, the aide encouraged supporters to arrive two hours before the polls close on Tuesday, Nov. 8, and form long lines. Bruce DePuyt/Maryland Matters

BALTIMORE CITY COUNCIL ADVANCES BILL TO DECREASE YEARS REQUIRED FOR PENSIONS: A bill that would decrease from 12 to eight the number of years Baltimore elected officials would need to earn a pension was advanced by a Baltimore City Council committee Thursday despite a warning from city retirement officials that costs could escalate. Emily Opilo/Baltimore Sun

COMMENTARY: THE PENSION PROPOSAL IS SELF-SERVING: In a nakedly self-serving move, Baltimore City Council members, knowing that they may be term-limited in the very near future if Question K passes, decided that it was necessary right now to amend the pension requirements so council members can earn pensions after eight years, with little warning and little oversight. Brian Griffiths/The Duckpin

FREDERICK COUNTY GOV SPENT NEARLY SIX FIGURES ADVOCATING FOR BALLOT QUESTION: The Frederick County government spent $91,800 between Sept. 28 and Oct. 23 for advertisements in support of ballot Question A, which clarifies the County Council has the final say in bargaining disputes between the county and its career firefighters.  Jack Hogan/Frederick News-Post

HOGAN’S HERO’S SEND-OFF FROM BUSINESS GROUP: Gov. Larry Hogan’s valedictory address speech to the fundraising lunch of the Maryland Free Enterprise Institute, an audience that loves his pro-jobs message and largely shares his fears about all-Democratic rule in Annapolis, was a particular lovefest, as the governor has just 2 1/2 months left in office. Josh Kurtz/Maryland Matters