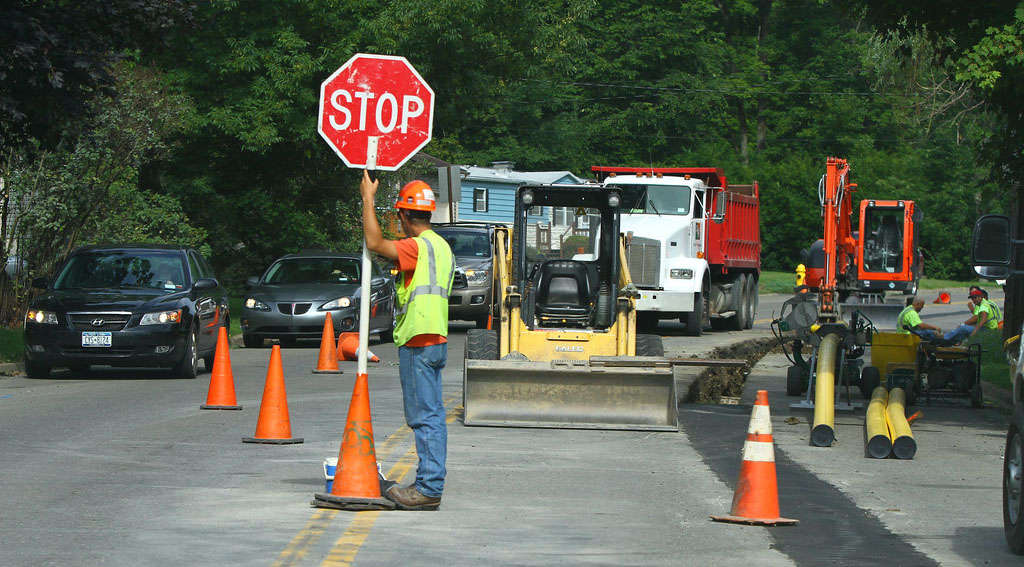 Gov. Hogan says that with new infrastructure efforts, construction companies will need skilled workers. "Road Construction" by waitscm is licensed under CC BY 2.0.

HOGAN ANNOUNCES $15M FOR CONSTRUCTION WORKERS: Facing a shortage of workers to build all of Maryland’s infrastructure, Gov. Larry Hogan (R) announced a $15 million program to sweeten jobs on public projects. The “Jobs that Build” grants will offer companies with state contracts $10,000 per worker to entice employees to stay on the job or start working on a state infrastructure project. Erin Cox/The Washington Post.

EDUCATION OVERHAUL COULD BE PHASED IN: A board established to implement Maryland’s 10-year comprehensive education plan proposed a timeline for that on Thursday. Instead of setting a March deadline for the state’s 24 school systems to submit implementation plans, the Blueprint for Maryland’s Future Accountability and Implementation Board suggested it could be done in three phases. William Ford/Maryland Matters.

MOORE OUTLINES PLANS AT COPPIN; COX CANCELS APPEARANCE: More than a thousand Baltimore and Prince George’s County faith and community leaders filled an auditorium at Coppin State University on Sunday to hear Maryland’s gubernatorial candidates respond to their calls for state investments in housing, jobs and health care. But despite an agenda listing time slots for both Democratic nominee for governor Wes Moore and Republican Del. Dan Cox, Moore was the only candidate onstage as Cox decided not to attend. Cassidy Jensen/The Baltimore Sun.

OPINION: SAY NO TO THIS WES MOORE: Baltimoreans may not have much, but we do have our narratives.  We have our tales that if told should be credited to us and only us.  This is why I am disappointed with the rhetoric coming from Wes Moore and his campaign for governor. The rhetoric begins with Moore’s book, “The Other Wes Moore.” Chris Anderson/MarylandReporter.com.

COX VIEWS LGBTQ TALK IN SCHOOLS AS ‘INDOCTRINATION:’ an Cox opposes the expansion of LGBTQ rights in education, highligthting during his gubernatorial campaign his belief that addressing issues of gender, sex and sexual orientation in schools equates to “indoctrination” and “propaganda.” He is also vocal about parental involvement in education. Hannah Gaskill/The Baltimore Sun.

PEROUTKA PUTS HIS RELIGIOUS BELIEFS ABOVE THE LAW: Republican candidate for attorney general Michael Peroutka has made clear that if he is elected, his view of Christianity will determine his decisions. And he has said that as attorney general he will not support laws enacted by the legislature if he believes they are in conflict with his understanding of God’s law. Joe Heim/The Washington Post.

OPINION: BAY CONTINUES TO SUFFER: On Tuesday, the Environmental Protection Agency caved to Chesapeake Bay-state governors and agricultural interests by failing to enforce the Clean Water Act or impose sanctions on recalcitrant states for violating mandates to reduce bay pollutants. Instead, the annual meeting of the Chesapeake Executive Council with the EPA administrator and bay-state governors – including Larry Hogan of Maryland and Glenn Youngkin of Virginia – turned into a self-congratulatory session where for the third time it was acknowledged that bay states will miss a vital cleanup deadline. Sen. Gerald Winegrad/The Washington Post.

NEIL PARROTT CHALLENGES TRONE: As a professional traffic engineer, Neil Parrott has been working on the roads to Washington, D.C., for a long time. As a politician now running for Congress, his actions have showed a similar purpose. Dwight Weingarten/The Hagerstown Herald Mail.

POLITICAL BRIEFS: PAC BACKS PARROTT; TRONE SPENDING: The House Freedom Fund, a political action committee organized by a group of conservative U.S. representatives and led by U.S. Rep. Jim Jordan, R-Ohio, has endorsed state Del. Neil Parrott, R-Washington, in his bid to unseat Democrat David Trone in the 6th Congressional District race. Wes Moore on Monday will be touring parts of Hagerstown at the invitation of Mayor Emily Keller, then headline a fundraiser at The Maryland Theatre. Staff/The Hagerstown Herald-Mail.