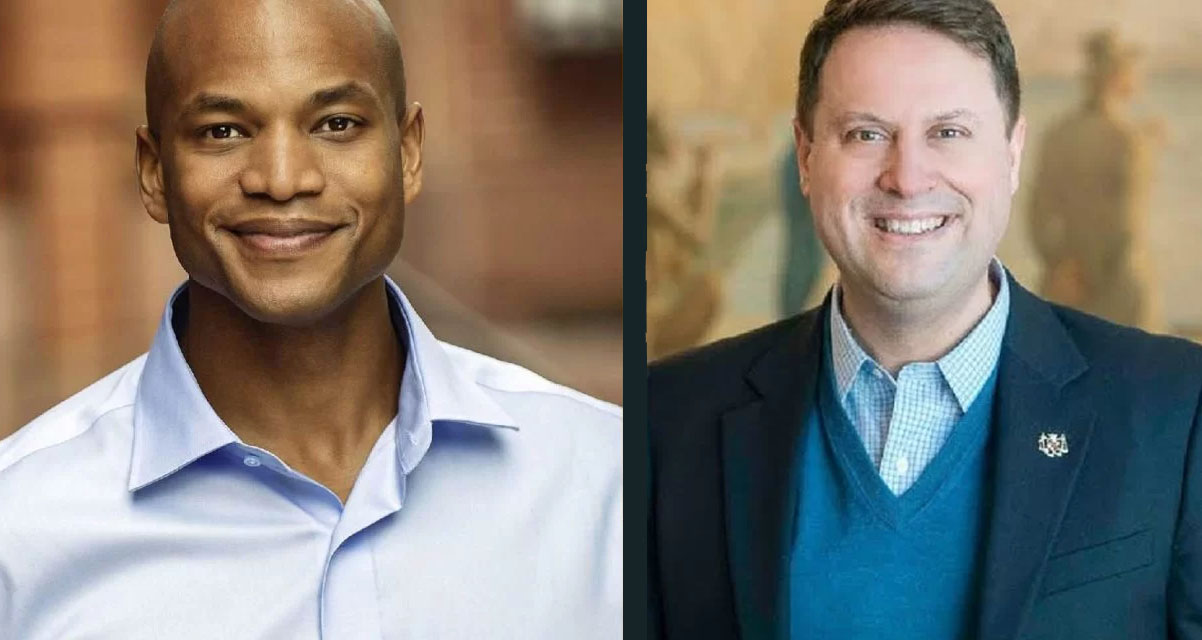 Wes Moore, left, and Dan Cox will make their only joint debate appearance of the governor's race this afternoon. Photos from Wes Moore for Maryland and Dan Cox for Governor.

COX AND MOORE DEBATE TODAY: Maryland’s top two candidates for governor will meet Wednesday in their first — and likely only — televised debate. Republican Dan Cox and Democrat Wes Moore will meet Wednesday afternoon at the studios of Maryland Public Television to record the debate. The debate will be broadcast Wednesday evening at 7 p.m. on MPT, WBAL-TV and WBAL radio. And it can be streamed at The Baltimore Banner. John O’Connor/The Baltimore Banner. 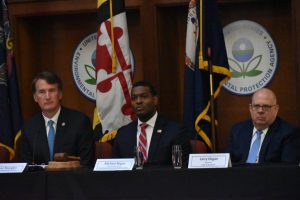 REACHING BAY CLEANUP GOALS PROVE ELUSIVE: The leaders of efforts to restore the Chesapeake Bay by 2025, a group that includes six governors including Maryland Gov. Larry Hogan, the Environmental Protection Agency, and the mayor of the District Columbia, acknowledged Tuesday they have not been doing enough to reach their goals. Staff of Capital News Service/MarylandReporter.com.

‘UNITE THE RIGHT’ EVENT RENAMED ‘MARYLAND UNITED:’ A planned rally for Maryland Republican candidates dubbed “Unite the Right” — the same name as the deadly 2017 rally in Charlottesville — has a new name: “Maryland United.” Organizer Kim Klacik, a WBAL radio host who twice ran unsuccessfully for Congress, posted about the new name on her social media accounts on Tuesday, one day after The Baltimore Banner reported on the connection. Pamela Wood/The Baltimore Banner.

WATCH HERE: MARYLAND COMPTROLLER CANDIDATE FORUM: Here is the recording of the candidate forum for Maryland Comptroller between Barry Glassman (Republican) and Brooke Lierman (Democrat). held on Oct. 6. MarylandReporter is one of the sponsors.

PARROTT HITS TRONE OVER PARTISANSHIP: Republican congressional candidate and Washington County state Del. Neil Parrott Tuesday fired back at incumbent Rep. David Trone after the Democrat said Parrott would make the House of Representatives an even more partisan place if he is elected. “All you need to do is look at his (Trone’s) voting record,” Parrott said. “Congressman Trone votes 100% with Nancy Pelosi. That is not bipartisanship. That is a joke.” Bryan Renbaum of the Baltimore Post-Examiner/MarylandReporter.com.

JUDGE RULES AGAINST USING McGRATH’s WIFE’s MESSAGES: Federal prosecutors will not be able to use texts and other messages sent by the spouse of Roy McGrath during the fraud and embezzlement trial for the former Gov. Larry Hogan aide. U.S. District Court Judge Deborah L. Boardman said in a Tuesday hearing that the request to admit the texts and photos raised serious questions about the trustworthiness of  messages sent back and forth to the father of Laura Bruner, McGrath’s wife, during alleged vacations to Italy and Florida. Bryan Sears/The Daily Record.

NEW GUARANTEED INCOME PROJECT SHOWING RESULTS: Leaders of a pilot project – the Baltimore Young Families Success Fund – that gives a guaranteed income of $1,000 a month for two years to 200 participants say the effects have been immediate. For many, the first two payments have also delivered stability, said Robin McKinney, CEO of CASH Campaign of Maryland. They’ve freed recipients to catch up on bills, enroll in new job training courses, and, in at least a handful of cases known to CASH, allowed recipients to secure stable housing. Adam Willis/The Baltimore Banner.

CYCLISTS FAIL IN BID TO SAVE NICE BRIDGE: A coalition of cycling groups has fallen short in their efforts to block the state from dismantling the old Nice-Middleton Bridge in Charles County. A federal judge in Baltimore said late Tuesday that the organizations failed to meet the high legal threshold for blocking demolition, which lawyers for the state said will begin later this week. Gov. Larry Hogan (R) and other dignitaries are scheduled to open the new span this morning. Bruce DePuyt/Maryland Matters.

SEN. CASSILLY CONCERNED ABOUT UNGENDERED LOCKER ROOMS: State Sen. Bob Cassilly has raised concerns with Harford County schools after he heard about a middle school student who felt uncomfortable changing in a school locker room with a student of a different biological gender. Tony Roberts/The Aegis. 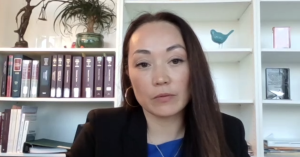 ANGELOS FAMILY SEEKS TO KEEP FINANCES SECRET: The legal battle that already made public the private dynamics of the family of Peter Angelos has shifted into terrain they also likely would want to keep secret: their finances. Lawyers for the wife and elder son of Angelos, the Orioles owner and legal titan incapacitated by illness, have asked a judge to limit the amount of financial information that bankers must reveal about the team, his law firm and other assets. Jean Marbella/The Baltimore Sun.