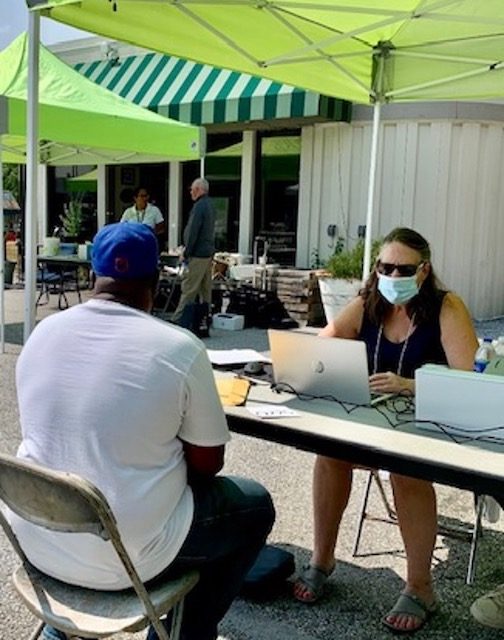 Listen to this article
By SAPNA BANSIL
BALTIMORE –Two days after his 29th birthday, Rico Johnson was able to embark on a new phase of his life by traveling just a few blocks from home.

A resident of the Govans neighborhood in northeast Baltimore, Johnson hopes to go back to school, become an HVAC technician, and create a comfortable home for himself and his mother. To help prepare for his future, Johnson showed up to an expungement clinic a short walk from his home, where he said volunteer attorneys began the process of clearing half his criminal record.

Johnson was among three dozen individuals who attended the clinic, hosted last month by Maryland Legal Aid and Loyola University Maryland at the site of the Govans Farmers’ Market. According to Legal Aid, the groups have partnered in two clinics to prepare free petitions of expungement for nearly 70 clients, saving them a total of $1,890 in filing fees.

For Johnson, expungement offered a welcome opportunity to put the past behind him.

“It feels great, because I’m transitioning into the man that I’m becoming,” Johnson said.

According to Legal Aid, expungements are the process of destroying or sealing certain arrests and criminal records so that they cannot be seen by the public.

In Maryland, convictions for some civil citations, nuisance crimes and marijuana possession are eligible for expungement. Other convictions, such as public intoxication, prostitution, theft and trespassing, require a 10- to 15-year waiting period. Even cases that result in dismissals or acquittals can linger on a criminal record and require going through the expungement process in order to be removed.

Because criminal records turn up on background checks and obstruct an individual’s path to obtaining housing, employment, loans and custody, expungement can often be life-changing.

“If you can get your record cleaned up, you improve your opportunity to get a good job, and then you improve the condition of your family and yourself,” said Kim Wagner, an attorney and Loyola professor who volunteered at the clinic. “Expungements are just so good as a starting block to building a better life.”

The expungement clinic was the most recent of Legal Aid’s community lawyering initiatives, which forgo the traditional model of requiring clients to trek to law offices and instead provide free services directly in underserved communities.

According to Angus Derbyshire, Legal Aid’s acting director for training and pro bono, the community lawyering model arose in 2015 as a response to the death of Freddie Gray Jr., who sustained fatal injuries while in police custody in Baltimore. In subsequent listening sessions, community members voiced a desire for Legal Aid to engage more visibly in communities of need.

Beginning with a March expungement clinic held in rainy and windy weather, Legal Aid has built a more conspicuous presence in Govans through its partnership with Loyola.

“(Govans) was certainly an area that we hadn’t really had an opportunity to get into in the past,” Derbyshire said. “We were very happy when we got to go in March and saw the turnout and the number of people that would stand in the rain to try to get an expungement. It really reinforced the fact that we’re in the right place.”

“Part of why we’re here is to instill upon students an idea of serving their community,” said Matt Beverlin, a visiting assistant professor of political science at Loyola who helped organize the expungement clinics. “They’re able to change people’s lives right next to campus.”

Attendees reported that having legal resources available directly in Govans helped them navigate the complex process of expungements, which often involves filing a petition in court, paying a fee and waiting as long as eight months for a resolution. Johnson had never attempted to obtain legal assistance for expungements prior to learning about the Sept. 17 clinic.

For Nita Wheeler, a 33-year-old medical assistant who works one block from the Govans Farmers’ Market, the clinic was a useful starting point for her boyfriend to finally pursue expungements of his criminal record.

“I had heard about expungements, however, I never knew where to start,” Wheeler said. “Especially if you have to go through the court system, it’s a process. (The clinic) is definitely a great opportunity for a lot of people.”

Though attendees must still wait for their records to be formally expunged, the clinic nonetheless represented a positive first step.

“I’m always amazed every time we do this, people have kind of given up hope,” Derbyshire said. “They come to the clinic and they realize, ‘Hey, I kind of have a new opportunity here. This person I was then is not defining me now.’ I think that’s a real lesson to learn.”

Rising health care costs are expected to erase Maryland’s savings from health care reform; many will still be uninsured

Many hatchery-produced oysters are illegally harvested