Gov. Larry Hogan gives his State of the State address to a crowded House of Delegates chamber. Governor's Office photo

TAX CREDITS, TOUGHER GUN SENTENCES: Gov. Larry Hogan used his first State of the State address since being re-elected to push for targeted tax credits for retirees, longer sentences for gun offenders and more oversight of local school systems. As “Never Trump” Republicans encourage him to run for president in 2020, Hogan emphasized bipartisan governing — and received a mix of applause and criticism from Democrats in response, report Luke Broadwater and Pamela Wood in the Sun.

FACT-CHECKING THE SPEECH: Doug Donovan of the Sun fact-checks the major points of Gov. Hogan’s speech, adding background and nuance to his statements. It includes information on tax cuts, the drug crisis and school funding.

DEMOCRATIC RESPONSE: Del. Kathleen Dumais delivered the Democratic response to the governor’s State of the State, saying that. “I also want to thank Governor Hogan for submitting a budget proposal that funds so many of our collective priorities, including employee raises, increases to education funding and increases to mental health providers — each mandated by the General Assembly. … But the General Assembly will also need to make the hard decisions to cut tens of millions of dollars to balance the governor’s budget — since the governor left a deficit.”

HOGAN ON BIPARTISANSHIP: In an op-ed for the Post, Gov. Larry Hogan writes that “while partisanship, dysfunction and gridlock have become commonplace in Washington, just 30 miles up the road, in Annapolis, we have chosen a different path. We recognized that people want elected officials in both parties to put an end to the culture of intolerance, intimidation and inaction, and just get to work.” 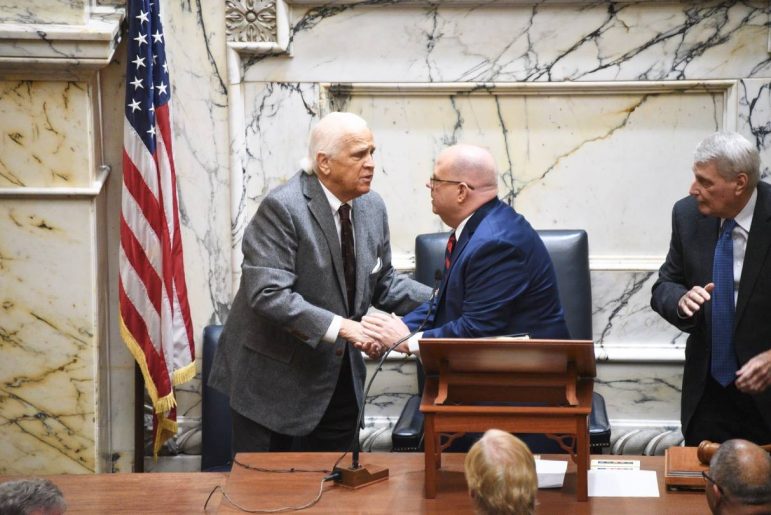 ON MIKE MILLER, HIS HEALTH: Mike Miller has cancer. He is struggling to cope — and so is the Senate he has led since 1987. His treatment for Stage 4 prostate cancer that has metastasized to his spine and pelvic area is overlapping with the 90 days of his 33rd session as leader. The first of a probable six rounds of chemotherapy began two days after the Assembly’s opening session. His second round began this week. Steve Hendrix, Ovetta Wiggins and Arelis R. Hernández report that suddenly, there is a bit less of Miller amid the Senate’s unfolding rituals and routines.

LOH TO STAY ON TO MID-2020: University of Maryland President Wallace Loh will remain at the helm of the state flagship school through June 2020, a reversal that comes three months after he announced plans to retire at the end of this school year, reports Talia Richman for the Sun.

UPGRADED 911 SYSTEM ON MACo AGENDA: The Maryland Association of Counties is pushing for improvements in the state’s 911 system, among other priorities, while the Maryland Municipal League has just one goal during this General Assembly session: to protect local authority in deciding where small cellular towers will go around the state, Diane Rey reports in MarylandReporter.

PANEL TO STUDY RECREATIONAL POT: Maryland’s legislative leaders are working to convene a work group to study the legalization of recreational marijuana use in the state, reports Danielle Gaines for Maryland Matter. The topic has been long-simmering in Annapolis since medical cannabis was authorized in 2012. Two years later, the state decriminalized possession of small amounts of marijuana.

POST-LABOR DAY SCHOOL START TOUTED: The mayor of Ocean City and other tourism boosters told a Maryland Senate panel Wednesday that a proposal to effectively overturn a school-year executive order from Gov. Larry Hogan would cost families valuable time together and lead to a drop-off in economic activity, Bruce DePuyt of Maryland Matters writes. The warning came during a hearing before the Education, Health and Environmental Affairs Committee on Senate Bill 128, a measure backed by two powerful lawmakers that would give local boards of education the power to make school calendar decisions.

ASSAILANTS ON THE HOOK? Mothers or fathers whose parental rights were terminated for having conceived the child through nonconsensual intercourse could still be ordered to pay child support under legislation being considered by the Senate Judicial Proceedings Committee, Steve Lash reports in the Daily Record. Senate Bill 98 would carve out an exception to longstanding Maryland law that holds a termination of parental rights also absolves a mother or father from having to pay child support.

BILL EYES HOMEOWNERS WITH PAST-DUE WATER BILLS: No one should lose their home for a past-due water bill. That’s the notion behind legislation filed by state Sen. Mary Washington (D-Baltimore City) and supported by nearly the entire city delegation in the General Assembly. Senate Bill 96 would make permanent a current law that prohibits foreclosure tax sales for homes with delinquent water bills in the city, Danielle Gaines of Maryland Matters reports.

JHU ISSUES POLICE BILL DRAFT: The Johns Hopkins University released its own draft Wednesday of a proposed state law that would allow it to establish a campus police force, including measures to address concerns about transparency and accountability by the private institution. The 14-page draft bill spells out civil rights protections and oversight mechanisms that the university would have to follow if the General Assembly permits the creation of the force, Ian Duncan of the Sun writes.

FREEDOM OF PRESS DAY: Sen. Sarah Elfreth filed legislation to make June 28 “Freedom of the Press Day” in the state in honor of the five killed in the Capital Gazette shooting, Chase Cook of the Annapolis Capital reports. [It’s SB397 co-sponsored by all 47 senators.]

COURT UPHOLDS MTA CASE DISMISSAL: A federal appeals court has affirmed the dismissal of a First Amendment retaliation case filed by the head of a local transit union against Maryland Department of Transportation leaders, Heather Cobun of the Daily Record reports.