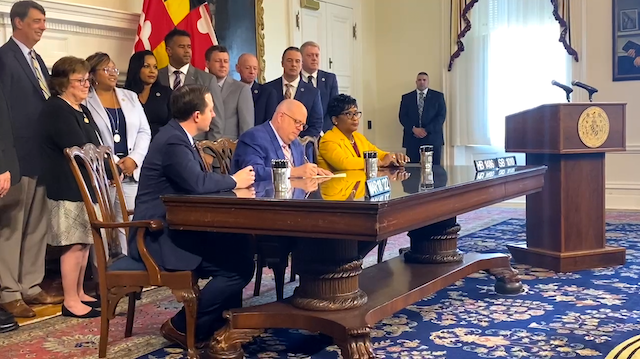 Gov. Larry Hogan, with House Speaker Adrienne Jones, D-Baltimore County, to his left and Senate President Bill Ferguson, D-Baltimore to his right, signs into law a bill to lower Maryland gas prices by placing a 30-day moratorium on the state’s gas tax.

By STEPHEN NEUKAM and E. A. BREEDEN

ANNAPOLIS — Maryland drivers got immediate relief at the pump Friday afternoon when Republican Gov. Larry Hogan signed into law a 30-day gas tax moratorium, after the legislation was fast-tracked this week by unanimous votes in the General Assembly.

The law, which went into effect immediately, suspends the state’s nearly 37-cent gas tax. Prices at the Eastport Shell gas station in Annapolis dropped by 36 cents from $4.29 to $3.93 just minutes after the bill signing.

“This bipartisan action will provide some relief from the pain at the pump,” Hogan said at the bill signing. “This, of course, is not going to be a cure-all, and market instability will continue to lead to fluctuations in prices.”

Jen Gaynor of Catonsville was one of the first customers to buy gas at the reduced price at the Eastport Shell station.

“I was pretty happy to see $3.93 pop up, because I do need gas,” Gaynor said. “Otherwise, I’ll need AAA to get me back to Catonsville.”

Gaynor said she fills her 13-gallon tank about twice a week, which means she will save about $40 with the lower price. 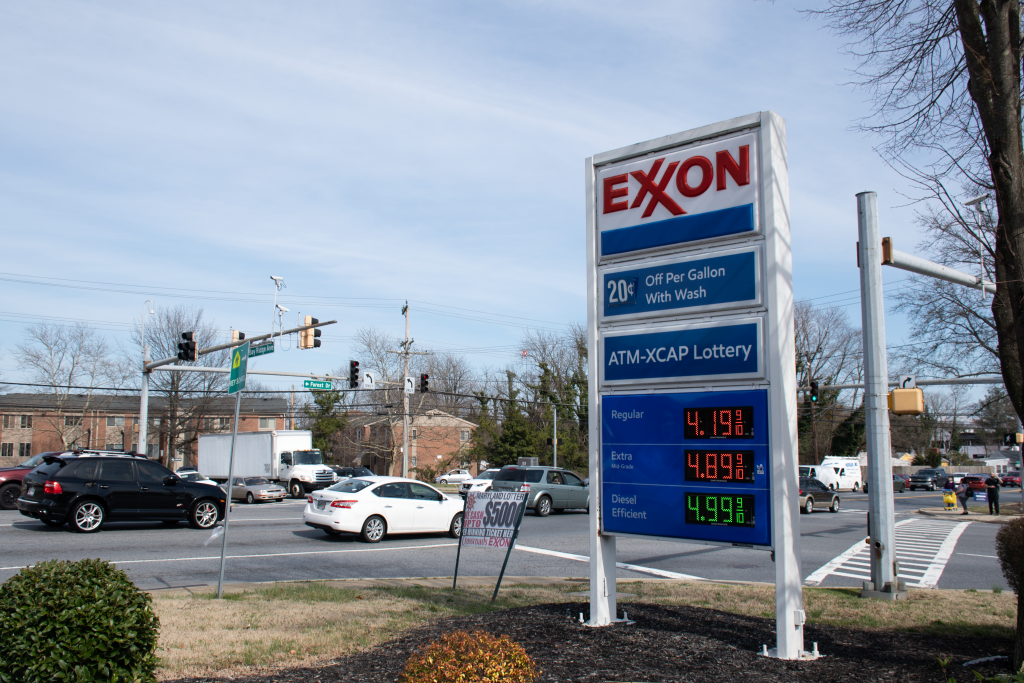 Hogan was joined at the signing by Senate President Bill Ferguson, D-Baltimore, and House of Delegates Speaker Adrienne Jones, D-Baltimore County, who worked with the governor to introduce and pass the bill in just over a week.

“We are showing that Maryland leaders know that when there are problems that Marylanders are facing, we come together and we fix them,” Ferguson said.

Maryland became the first state to suspend its gas tax in response to soaring fuel prices. Georgia Republican Gov. Brian Kemp was expected to sign a similar bill Friday. The Georgia moratorium would suspend the state’s 29-cent tax until May 31.

At least 17 other states are considering a tax moratorium, according to the National Conference of  State Legislatures.  Maryland’s gas tax holiday is one of the rare incidences when such legislation has been enacted since policy makers and politicians began debating the idea more than 25 years ago.

Now, drivers across the state will wait and see how much of an affect the bill has on prices at the pump.

Comptroller Peter Franchot, a Democrat running for governor, tried to put to bed concerns about price gouging, as consumer advocates this week raised concerns that gas stations might pocket the tax break intended for drivers.

Franchot, who was the first to propose the gas tax holiday idea in the state last week, said he did not expect there would be any trouble getting gas stations to cooperate with dropping their prices.

“I kept hearing that from people saying, ‘The gas stations aren’t going to pass it on,’” Franchot said at a press conference after the bill was signed. “Yes, they are. They are patriotic just like everybody else in the state.”

Two competing gas stations on opposite corners in Annapolis reflected confusion around prices in the law’s early going.

At the Shell station on the corner of Forest Drive and Bay Ridge Avenue in Annapolis, the price for regular gas had dropped to $3.91. Meanwhile, at the Exxon station across the street at Forest and Hillsmere drives the price stood at $4.19.

The Exxon gas station attendant, Parass Paudel, said he does not make changes to the price of gas without the owner’s instructions, and the owner had not been at the station Friday.

“The owner is responsible for everything,” Paudel said.

The moratorium comes after lawmakers on both sides of the aisle attempted to amend the bill this week to make the tax suspension longer.

Legislators argued that the tax moratorium should be extended to 90 days, but the amendment was defeated in both chambers.

Franchot thanked Hogan and legislative leaders for “indicating their openness to extending this gas tax holiday.”

Hogan said previously he wanted the holiday to be longer, but settled on one month in a compromise with legislators.

While prices dropped at stations in Annapolis, lobbyists for gas stations and fuel providers this week cautioned that people should temper expectations about the impact of the gas tax holiday and that drivers should not expect an immediate 37-cent drop.

Gas prices have been rising since January as relations between Russia, a major global source of crude oil, and Ukraine became unstable.

Between the weeks of Feb. 28 and March , U.S. gas prices rose by 13%, according to an analysis of data from the U.S. Energy Information Administration. Between March 7 and March 14 prices shot up again by another 5%, the agency’s data shows.

Earlier this week, consumer advocates and tax experts sounded off on whether the gas tax holiday policy would lead to decreased fuel prices.