Senior House of Delegates member Jay Walker says he has decided to step away from politics when his term ends. File photo Maryland Reporter.

PUBLIC HEALTH OFFICERS CITE THREATS DURING COVID WORK: Public health workers from different corners of Maryland told state lawmakers Tuesday that they felt threatened by residents and undermined, and even retaliated against, by leadership at the state health department during the past two years of the coronavirus pandemic. Meredith Cohn/The Baltimore Sun.

HEALTH DEPT PAYMENT BACKLOG CREATING PROBLEMS WITH AID: A backlog of invoice payments that the Maryland Department of Health owes to public health contractors has hampered their ability to assist those most in need. The agency’s inability to pay some of its vendors in a timely fashion has prompted a new round of criticism aimed at Health Department leaders, a frequent occurrence throughout the COVID-19 pandemic. Hannah Gaskill/Maryland Matters.

105-ACRE NASA GREENBELT FOREST SAFE FOR NOW: The mostly forested NASA property in the headwaters of the Anacostia River in Maryland  that conservationists feared could be bulldozed has won yet another reprieve. The federal Public Buildings Reform Board, which late last year called for the sale of the 105-acre site near NASA’s Goddard Space Flight Center in Greenbelt has decided to hold off on recommending disposing of any government properties for at least three years. Tim Wheeler of the Bay Journal/Maryland Reporter.

DEL. WALKER TO LEAVE POLITICS IN JANUARY: Del. Jay Walker (D-Prince George’s), a senior House member who had been seriously contemplating a run for state Senate this year, said Tuesday that he plans to step away from politics when his term ends in early January. “It’s been a good run,” Walker said. Josh Kurtz/Maryland Matters.

GOP BID TO LOWER GAS TAX IN BABY BILL FAILS: A Tuesday vote in the House of Delegates on a bill to eliminate taxes on some purchases for babies turned into a skirmish over the state’s gas tax. Legislation that would result in a lower gas tax sponsored by House and Senate Republicans remains stuck in committee. So House Republicans Tuesday attempted to force the issue by proposing to amend a bill that would exempt baby bottles, baby bottle nipples and infant car seats from the state sales tax. Bryan Sears/The Daily Record.

OPINION: DEMOCRATS WANT TAX CUTS, BUT NOT BIG ENOUGH ONES: Notwithstanding the fact that our Democratic colleagues’ newfound appetite for tax cuts just happens to coincide with election year, this development is welcome news, and we anticipate bipartisan support for many of these measures. … In a high-tax state like Maryland, any tax relief is a good thing. However, the Democratic tax relief package is pretty weak tea when compared to the $4.6 BILLION budget surplus the state forecasts for the coming fiscal year. Dels. Jason Buckel and Haven Shoemaker/Maryland Reporter.

INTERVIEWS WITH BROWN, SHALLECK FOR ATTORNEY GENERAL: In interviews as they run for state attorney general, Anthony Brown and Jim Shalleck said they wanted to expand the role of the attorney general, albeit in very different ways. They both agreed, too, that more resources are needed to provide access to counsel to people who can’t afford lawyers in civil matters, such as evictions — a cause that Frosh has championed during recent legislative sessions. Interviews with the candidates Katie O’Malley and Michael Petrouka will be noted here soon. Madeleine O’Neill/The Daily Record.

DESPITE END OF COVID SURGE, HOSPITAL STILL STRUGGLE: Even though the surge of the omicron variant of Covid 19 is now essentially over, with coronavirus hospitalizations dipping to only 391 statewide, a fraction of what they were in January, hospital officials say they are still struggling. Johanna Alonso/The Daily Record.

HARFORD ELECTIONS BOARD TO DISCUSS COUNTY REDISTRICTING BILL: The Harford County Board of Elections will hold a special meeting Wednesday evening after it found inconsistencies in the redistricting bill recently passed by the County Council. The Board of Elections found discrepancies in the language of the bill and in the graphical map, according to board President Allison McCord. Jason Fontelieu/The Aegis. 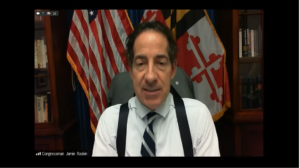 RASKIN TESTS POSITIVE FOR COVID: Rep. Jamie Raskin announced Tuesday that he has tested positive for COVID-19. Raskin said he tested positive on Monday, after taking a test for members of Congress who planned to attend the State of the Union address Tuesday night. In a statement, Raskin said he has been fully vaccinated and has received a booster shot. He wrote that flu-like symptoms “have been pretty mild so far.” Staff/The Associated Press.