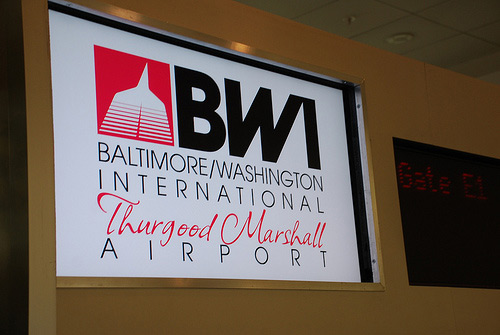 Listen to this article
By Julia Rosier and Ross O’Keefe
Capital News Service
The recently announced merger between Frontier Airlines and Spirit Airlines will create the second-largest airline carrier at Baltimore/Washington International Thurgood Marshall Airport, but some critics say the proposed combination carrier would affect fares and service adversely.

In addition, the merger could hit a roadblock with the U.S. Justice Department, which already has taken aggressive steps against other airlines for what it sees as anti-competitive business practices.

The merger, valued at $6.6 billion, would create the fifth-largest U.S. airline carrier and is slated to close in the second half of 2022. It is the first merger of large U.S. airlines since Alaska Airlines and Virgin America in 2016 and U.S. Airways and American Airlines in 2013.

Frontier Board of Directors Chairman William Franke said the merger would create “America’s most competitive ultra-low fare airline for the benefit of consumers.”

Breyault said he doesn’t believe it will lead to better service. He said the consolidation of the two airlines only hurts consumers more as the “nickel and dime” style of the airlines may be intensified.

“Frontier and Spirit, as ultra low-cost carriers, inject important competitive discipline into domestic passenger markets,” she told Travel Weekly. “Without that dynamic, the Big Four will be even less restrained in coordinating to set fares, ancillary fees and quality of service.”

BWI is a hub for Southwest Airlines, which is the dominant carrier at that airport. The Frontier-Spirit merger would not change that.

“No one is going to displace Southwest at Baltimore. That’s clear,” said Robert Mann Jr., president of R.W. Mann Co., Inc., and an airline industry analyst. “But the combination of Spirit and Frontier would be significantly larger at Baltimore and represent a better set of services for any prospective customer.”

Mann said that in any hub, the dominant carrier, in this case Southwest Airlines, “sets the tone” for the airport. He said the secondary carrier would have a role and any other carrier would act as a “bystander.”

Mann agrees that the combined airline may face difficulties from regulators.

“There will be a lot of folks who don’t want this to happen because it represents the potential for a significant disruption of air business,” Mann said.

Mann said both Frontier and Spirit are known for their low fares, so he suspects that those who oppose a merger will suggest that the combination will cause the carriers to give up their low-fare branding. He said the existing customer structure of the two airlines attracts infrequent and leisure travelers.

“Given that this carrier is significantly lower fare, in almost all instances than any other carrier, including Southwest, the likelihood is that we would see some gravitation toward the combination by price-seeking business travelers,” Mann said.

Phil Maroun, principal at Renaissance Strategic Advisors in Arlington, Virginia, said there are still some questions about what the merger will entail.

“A consolidation of these two would probably improve fares and the number of flights per day…but no deal is done until it’s approved and there’s always things that can change the outcome,” Maroun said.

The merger gives Frontier a 51.5% controlling stake and Spirit a 48.5% stake. Analysts said it is too soon to tell how airline fares might be affected.

“It’s really unknown what this new set of regulators in this… administration are looking for because we haven’t had this case appear so far,” Mann said. “This will be a precedent case and I guess we’ll see what’s interesting to these regulators.”

“In an industry where just four airlines control more than 80% of domestic air travel, American Airlines’ ‘alliance’ with JetBlue is, in fact, an unprecedented maneuver to further consolidate the industry," Attorney General Merrick Garland said in a statement. "It would result in higher fares, fewer choices, and lower quality service if allowed to continue. The complaint...demonstrates the Justice Department’s commitment to ensuring economic opportunity and fairness by protecting consumers and competition.”

Joining the federal suit are attorneys general from Arizona, California, the District of Columbia, Florida, Massachusetts, Pennsylvania and Virginia.