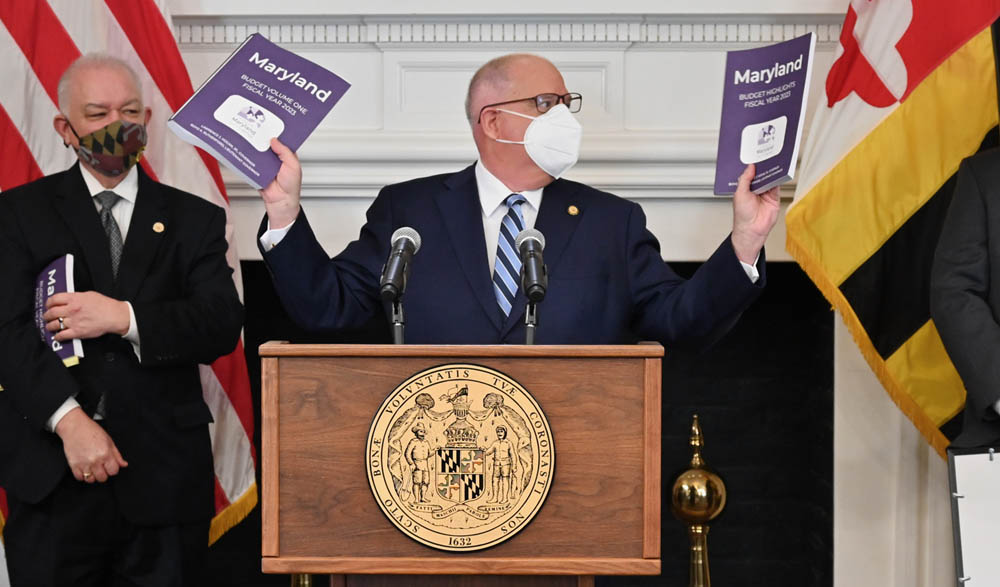 STATE INDIVIDUAL TAX FILING DEADLINE EXTENDED INTO JULY: The 2022 Maryland income tax filing and payment deadline has been extended to assist people facing financial difficulties due to the COVID-19 pandemic. Comptroller Peter Franchot on Wednesday pushed the deadline from April 18 to July 15. This is the third straight year it has been extended. Greg Larry/The Cumberland Times News.

HOGAN BLAMES WHITE HOUSE PLAN FOR DELAY IN STATE COVID TESTS: Gov. Larry Hogan said Wednesday that the White House plan to distribute 500 million COVID-19 testing kits has held up Maryland’s own efforts to get kits to its residents. Speaking to reporters during a Wednesday news conference, Hogan could not say how many tests destined for Maryland were put on hold. But he said he mentioned his concern to White House officials “pretty forcefully” during a call with governors the day before. Jeff Barker and Pamela Wood/The Baltimore Sun.

CLIMATE CHANGE BILLS’ FOCUS IS ELECTRIFICATION: As the Maryland General Assembly settles into its regular 90-day session, environmental leaders in both chambers are expected to reveal legislative proposals aimed at tackling climate change soon. The Senate draft could be ready as early as next week. The Senate plans to introduce one sweeping climate bill, while the House plans to split the legislation’s provisions into multiple bills. Elizabeth Shwe/Maryland Matters.

SCHULZ HAS $1.52M IN GOV CAMPAIGN COFFERS: Kelly M. Schulz has raised $1.52 million in her bid to fill the seat being vacated by her former boss, Gov. Larry Hogan (R). While it’s a significant haul for a first-time Republican candidate in a blue state, her fundraising still lags behind several Democratic candidates vying for the seat. Ovetta Wiggins and Erin Cox/The Washington Post.

STUDY: OUTLAWED REDLINING STILL CAUSING HARM: The segregationist housing policies enacted nearly 100 years ago in Baltimore continue to harm the residents who live in the affected areas, according to a new study published by researchers at the University of Maryland School of Public Health. Hallie Miller/The Baltimore Sun.

CLEAN ENERGY RECEPTION: Hear from guest speakers about the climate and energy priorities for policy and regulation under consideration by the Maryland General Assembly during the Maryland Clean Energy Center’s Legislative Reception on Feb 17, 2022. Featured panels will discuss Energy & the Built Environment: Strategies Aimed at Addressing Climate Change and Innovation & Regulation: Shooting Toward Energy Targets in Maryland. Early Bird discounted tickets are on sale to attend this hybrid format event in-person or online. Prices increase to the standard registration rate on Friday, Jan 21.

OPINION: HOWARD MAKES A MESS OF CAMPAIGN FINANCE LAW: The editorial board for the Sun opines on the major snafu to its campaign financing law that fails to apply to primary races, just the race that many candidates need it the most. “Howard County voters deserve is a working campaign finance law. And it should have applied to primaries from the start — just as other jurisdictions have done. Whatever the cost, it should not be a sticking point considering how much greater the expense when government is dominated by special interests, which, on the county level, often means developers.”

MOSBY CHALLENGER HAS $226,000 ON HAND: Ivan Bates, one of two Democrats challenging Baltimore State’s Attorney Marilyn Mosby for her seat, has nearly $226,000 on hand heading into election year, $40,000 more than he had ahead of his previous bid for the office. Emily Opilo and Alex Mann/The Baltimore Sun.

PUGH EXPECTED TO BE RELEASED EARLY: Experts are predicting that former Baltimore Mayor Catherine Pugh’s time behind bars will soon be coming to an end. Pugh, who’s 71, has served more than half of her three-year sentence on federal fraud charges at a prison in Aliceville, Ala., and prison records show she’s slated to be released in January 2023. However, as covid cases grow, the federal CARES Act now allows institutions to release certain inmates based on their age, their health, and the length of their remaining sentence. Jeff Abell/WBFF-TV.