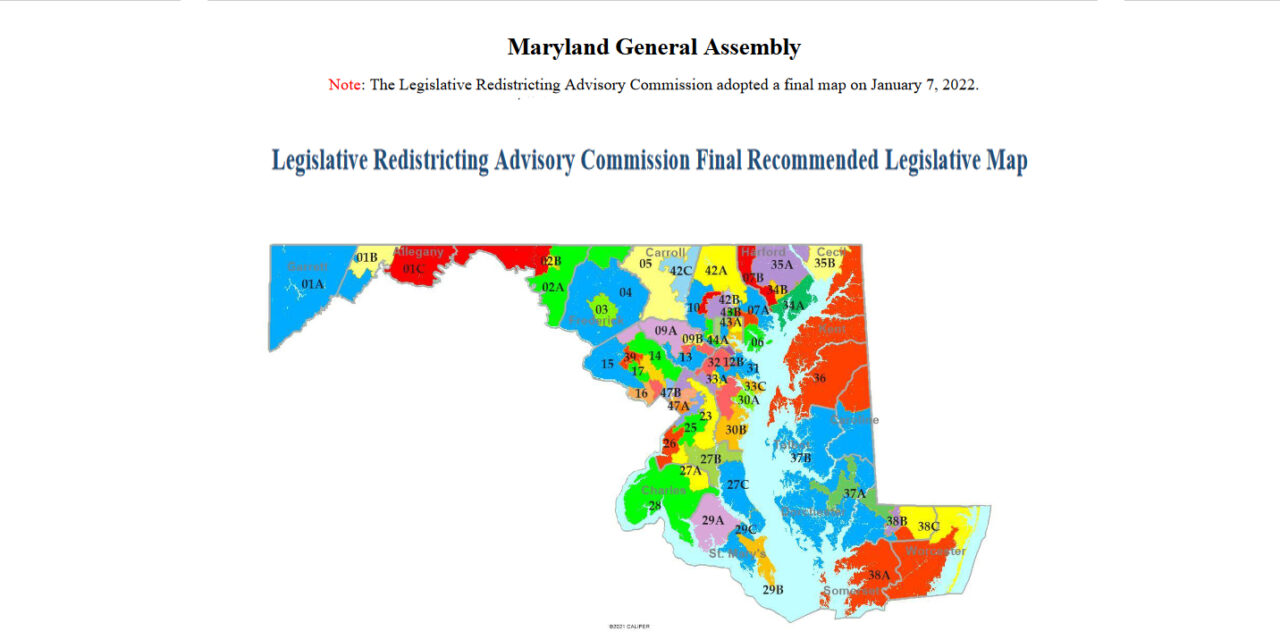 The Maryland Court of Appeals ruled Wednesday that this legislative district map did not violate the state constitution.

DEMS ON PANEL PUSH THROUGH NEW STATE LEGISLATIVE MAP: After making a few tweaks, state lawmakers are pushing forward a new map of districts for the 188 members of the Maryland General Assembly. On a party-line vote Friday, with Democrats in favor and Republicans opposed, a panel of lawmakers approved a map that shifts seats out of Baltimore City and into growing exurbs, while also creating a new district in northwest Baltimore County with hopes of electing a nonwhite lawmaker. Pamela Wood/The Baltimore Sun.

OPINION: LOSING MONEY OVER A FIGHT HOGAN CAN’T WIN: In a commentary for Maryland Reporter, Marc A. King, a 2018 Republican nominee for a seat in the Maryland legislature from District 15, questions Gov. Larry Hogan’s recent fund-raising tactics: issuing “an all-hands-on-deck email requesting recipients send him money so he can stop the state legislature from further gerrymandering the state at the legislative district level.” The money, King contends, “will do nothing to change the outcome of the redistricting of the state of Maryland. Sorry, but our blue state may get a little bluer.”

THE 2022 GENERAL ASSEMBLY UNDER COVID: In spite of soaring COVID-19 infections and hospitalizations, the General Assembly’s pandemic safety protocols are shaping up to be much different — and more publicly accessible in some ways — than what occurred during the 2021 session. Hannah Gaskill/Maryland Matters.

POT, DISAPPEARING MESSAGES, GHOST GUNS: LEGISLATIVE PRIORITIES SHAKE OUT: Maryland lawmakers will head back Wednesday to the State House in Annapolis amid a resurgent pandemic to sort through an ambitious slate of proposals during their final legislative session before facing voters in this year’s elections across the state. Among the issues raised as potential priorities are legalizing marijuana, major climate change legislation and more protections for renters facing eviction. Bryn Stole/The Baltimore Sun.

PAY HIKE PROPOSED FOR LAWMAKERS: The next batch of Maryland lawmakers should get a raise, a salary review commission concluded. The General Assembly Compensation Commission voted unanimously Friday to recommend an increase of about $6,306 to state lawmakers’ salaries during the next term, although some panelists said they wanted that figure to be higher. Bennett Leckrone/Maryland Matters.

VESTIGES REMAIN OF CYBERATTACK AT HEALTH DEPT: State health workers still often can’t use computers, access shared drives and get to important data a month after a cyberattack crippled Maryland’s health department, the head of a union representing agency employees said Friday. They’ve received little information about what’s going on and are preparing for the possibility that their systems could remain impaired for some time. Steve Thompson, Ovetta Wiggins and Erin Cox/The Washington Post.

LIBERTARIAN RUNNING FOR 31B HOUSE SEAT: Pasadena defense contractor Travis Lerol decided to run for the 31B seat in the Maryland House of Delegates after noticing a stark partisan divide growing nationally and at the state level. Lerol, a Libertarian, thinks he can provide a much-needed third-party voice. Dana Munro/The Capital Gazette.

OPINION: HOGAN ON FEDERAL GOV’T EARNING TRUST AFTER INSURRECTION: In a column for USA Today, Gov. Larry Hogan writes about the Jan. 6, 2021 insurrection, its causes and its cures, writing that “nobody would be surprised if there are more dark days like Jan. 6 in our nation’s future. Last year’s insurrection was a symptom of the crisis of distrust in our nation’s elected leaders. When so many Americans have lost faith that the federal government can still deliver for them, conspiracy theories, misinformation and hatred fill the void. And the void is only getting larger.”

SCHOOLS SWITCH TO ONLINE LEARNING: Montgomery County Public Schools announced Sunday that 11 schools with a spike in coronavirus cases will remain virtual this week and return to in-person classes Jan. 18. They also say they will give all students in the county KN95 masks in an effort to limit coronavirus transmission in schools. Allison Klein and Donna St. George/The Washington Post.

HARFORD SCHOOLS CONSIDER FINANCIAL BOOST FOR VAXXED EMPLOYEES: A financial incentive for Harford County Public Schools employees who have been fully vaccinated for COVID-19 will be considered at the county Board of Education’s first meeting of the year on Monday, according to the agenda on the district’s website. Jason Fonelieu/The Aegis.

ANNAPOLIS MAY EXTEND STATE OF EMERGENCY: The Annapolis City Council is considering extending the current state of emergency in the city by an additional 90 days. Mayor Gavin Buckley declared a 30-day state of emergency on Dec. 23 amid a surge of COVID-19 cases and hospitalizations. Brooks DuBose/The Capital Gazette.