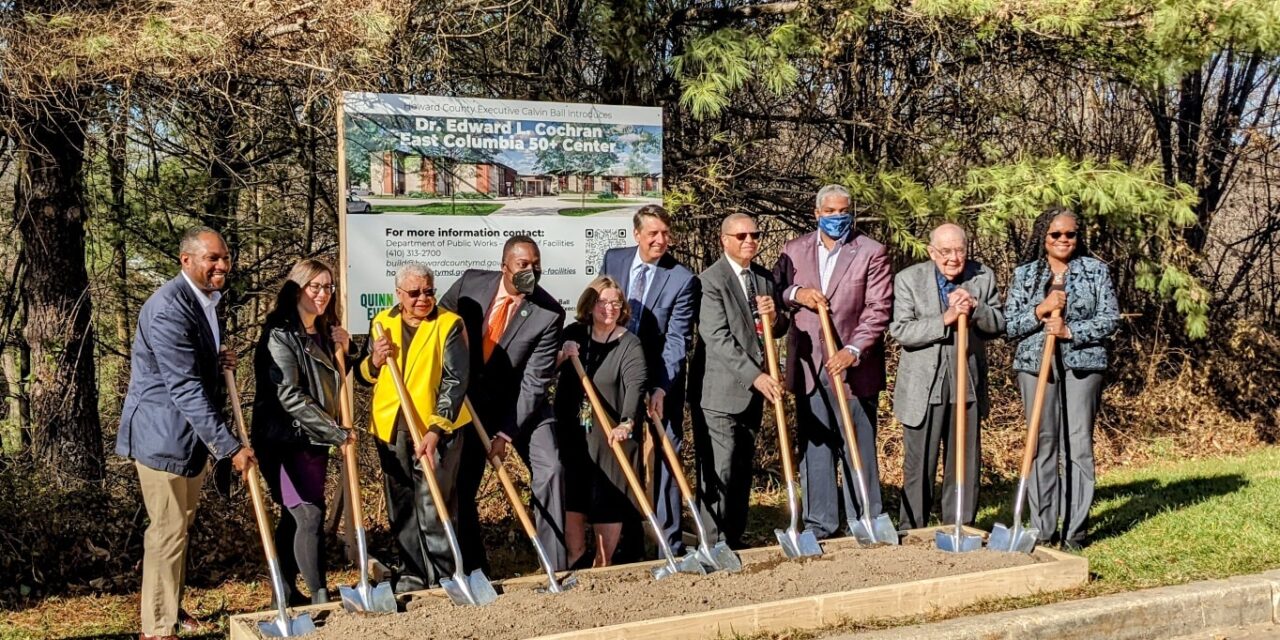 On a mild December Thursday next to the East Columbia library, Howard County officials broke ground for a new 50+ senior center they are naming for former County Executive Edward L. Cochran, 92, second from right. Cochran also served on the school board and county council, and except for his one-term as executive, 1974-78, Cochran was a research chemist at the Johns Hopkins Applied Physics Lab. He is the father of Del. Courtney Watson, who also served on the county council.

COVID NUMBERS RISE, HOSPITAL BEDS FILL: The number of COVID-19 cases in the state is rapidly rising with a positivity rate that well exceeds 5%. Hospitalizations also are on the rise in Maryland. And in some parts of the state, many are near or at capacity limits. Yes, the new omicron variant appears to be milder than other variants and accounts for less than 1% of the COVID-19 cases in the state. Bryan Renbaum/Maryland Reporter.

COVID PROCUREMENT AUDIT FINDS LACK OF REVIEW, MONITORING: A review of emergency procurements for supplies in Maryland during the COVID-19 pandemic found “a lack of compliance” in general with state regulations and “ineffective monitoring” of payments, according to a report released Thursday by the Maryland Office of Legislative Audits. Brian Witte/The Associated Press.

W. MD. LAWMAKERS SEEK $100M FUND FOR ECONOMIC GROWTH: Western Maryland lawmakers said Thursday they will seek $100 million in funding during the upcoming legislative session to incentivize economic growth in that part of the state. The idea of creating a fund of $100 million to attract businesses and spur new home construction was developed by the 11-member Task Force on the Economic Future of Western Maryland, which included two of the state lawmakers. Greg Larry/The Cumberland Times-News.

BIKE, PEDESTRIAN ISSUES IMPERIL NICE BRIDGE LOAN: A federal loan that Maryland is counting on to finance the new Nice/Middleton Bridge is in jeopardy because U.S. Department of Transportation officials have concerns about bicycle and pedestrian safety on the new span. That $200 million loan is expected to cover approximately one-third of the cost of the new bridge, which is about 60% complete. Bruce DePuyt/Maryland Matters.

PEOPLE’S COUNSEL SAYS PSC OK OF RATE INCREASE UNLAWFUL: The Public Service Commission acted unlawfully when it approved a rate increase earlier this year, the Office of People’s Counsel told the Baltimore City Circuit Court in a filing today. The PSC’s order approving Washington Gas’ proposed rate increase allows the utility to recover more than $8 million annually in costs that should not have been approved, OPC said. Staff/The Daily Record.

FINAL TWO WEEKS: Maryland Reporter, the original nonprofit website for news about state government and politics, is in the final two weeks of its annual NewsMatch fundraising drive and we’ve reached 80% of our goal. Every contribution by Dec. 31 is matched by national foundations. Please make a tax-deductible contribution today.

SACKLER FAMILY COULD FACE DAY IN COURT: A federal judge rejected OxyContin maker Purdue Pharma’s bankruptcy settlement of thousands of lawsuits over the opioid epidemic Thursday because of a provision that would protect members of the Sackler family from facing litigation of their own. The ruling was immediately praised by Maryland Attorney General Brian Frosh. Geoff Mulvihill/The Associated Press.

SEGAL: 3rd PARTIES SHOULD NOT ACT AS ‘SPOILERS:’ Maryland’s socialist Bread and Roses Party is disbanding, and its founder, Jerome Segal, is launching a run for governor as a Democrat. Segal said it’s important that third parties not act as “spoilers” and, in the case of Bread and Roses, inadvertently help Republicans by siphoning away voters who otherwise would support Democrats. Pamela Wood/The Baltimore Sun.

PROFESSIONALS NOT EXEMPT FROM SUBPEONAS, COURT RULES: Though exempt from the Maryland Consumer Protection Act, lawyers and other licensed professionals must still obey subpoenas from the state attorney general’s office when it is investigating their alleged violations of the MCPA, Maryland’s second-highest court ruled Wednesday. Steve Lash/The Daily Record.

LAUREL TRACK REOPENS AFTER HORSE DEATHS: Racing at Laurel Park will resume Thursday after two weekends of cancellations in response to a series of eight fatal breakdowns. The Maryland Racing Commission met Tuesday and took no action to prevent the reopening after receiving assurances from track officials, outside experts, trainers and jockeys that the dirt surface is in better shape than it was before the shutdown, which began after three horses suffered fatal fractures over Thanksgiving weekend. Childs Walker/The Baltimore Sun.