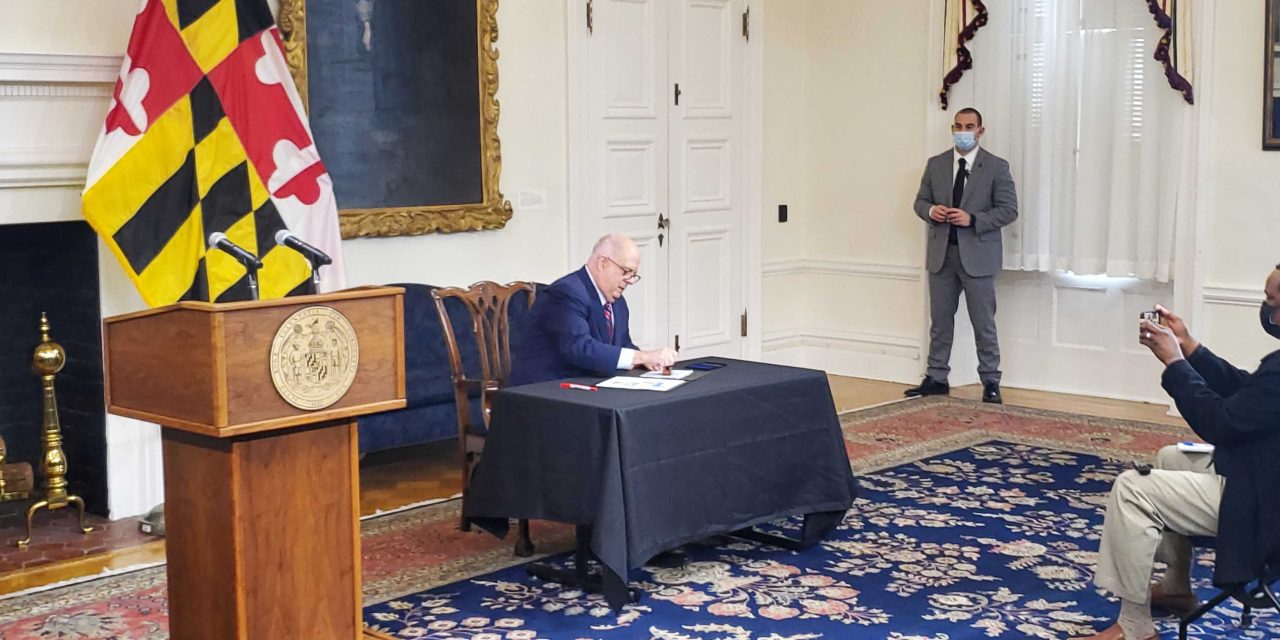 Gov. Larry Hogan, R, on Thursday, Dec. 9, 2021, vetoed a bill supported by the Democratic-majority Legislature that redraws Maryland’s congressional districts. Hogan says the map is unfair and gerrymandered and expects it to be challenged in court. (A.R. Cabral/Capital News Service.)

The General Assembly largely ignored the wishes of a significant portion of the state’s electorate in a recent vote to override Gov. Larry Hogan’s veto of congressional redistricting legislation favored by Democrats, several of Maryland’s GOP lawmakers said Monday.

Said action by the House of Delegates and the Senate came on Thursday evening just as the four-day special legislative session was winding down and just hours after Hogan had issued the veto.

On the first day of the special session, lawmakers declined to advance opposing redistricting legislation that was based on the work of an independent citizen’s commission whose members were appointed by Hogan. That legislation was not even given a vote and it died in committee.

“The gerrymandered congressional map that we passed is certainly incredibly disappointing and is tantamount to disenfranchisement of a large spectrum of the Maryland electorate. And that is sad,” Del. Haven Shoemaker, R-Carroll, told MarylandReporter.com.

As to prospective legal challenges to the new law, which some anti-gerrymandering groups have hinted at-it may be a difficult road ahead for the plaintiffs, Shoemaker, who is an attorney, said.

“In view of the precedent that the Supreme Court seems to have established with regard to the last Maryland case and the case out of North Carolina, it is certainly not going to be easy at least in federal court. I am cautiously optimistic that a state court action might be more successful.”

Sen. Johnny Ray Salling, R-Baltimore County, said it is unclear what may happen in the courts.

However, Salling also said that there is no doubt that the Democratic-supported congressional redistricting map was not the preferred choice of the overwhelming majority of the people who testified at a public hearing on the subject last week.

“Eighty-point six-percent of the people were unfavorable and did not want the legislators’ map. And 0.03% did. So it goes to show you that out of 156 people that gave testimony-125 did not want it and six did. That is how bad this map is and how gerrymandered it is.”

“Their (Democrats) goal is to push that one last Republican out. And their reasoning behind calling that a fair map just did not make sense to me. It is simple enough for anybody to see. It is another gerrymandered map. It was disappointing. But it was expected,” Chisholm added.

But not everybody agreed that the new congressional redistricting map is gerrymandered.

“I am against partisan gerrymandering and I am comfortable that that was not done,” Sen. Jill Carter, D-Baltimore City, said.

Carter, who like Shoemaker is an attorney, described the new map as “sound,” and said it takes into account both “population shifts and constitutional voting rights requirements.”

Carter expanded on that point.

“Baltimore City’s population for the first time in history has reduced from less than 600,000 residents to approximately 585,000. Both the 7th District in Baltimore City and the 4th District in Prince George’s County are the two congressional districts that meet our requirements for the Voting Rights Act.”