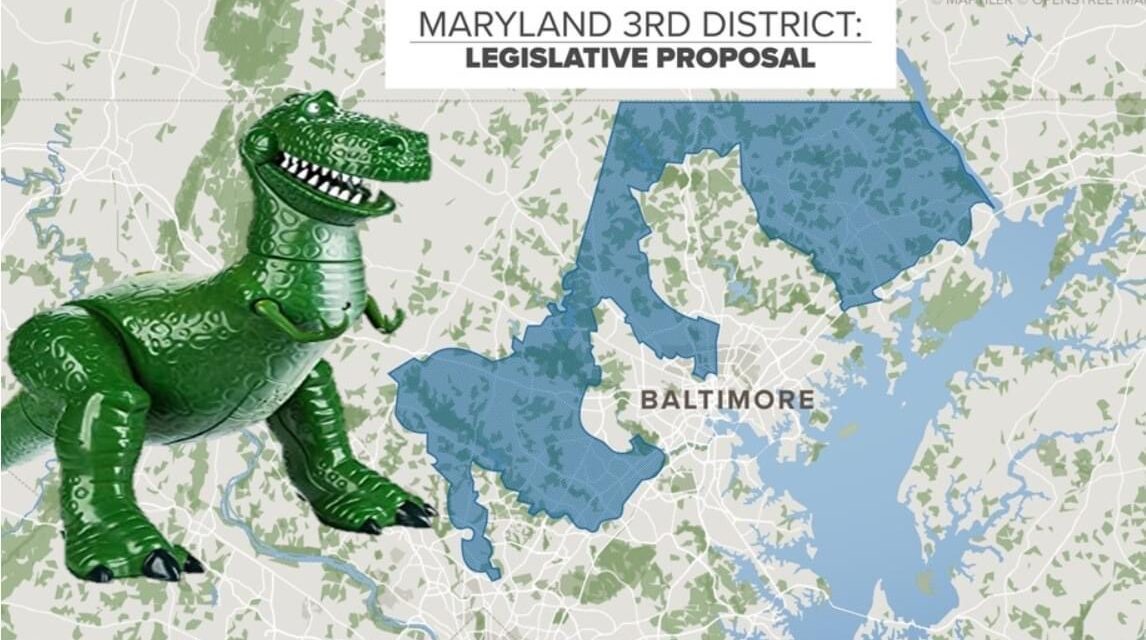 A federal judge once described the current shape of the 3rd Congressional District as a "broken-winged pteodactyl." But Sen. J.B. Jennings, R, Harford-Baltimore Cos., found the just-passed map was a different dinosaur: a tyrannosaurus rex. Shared by lobbyist Bruce Bereano.

2 LAWMAKERS MAKE JUVENILE JUSTICE A PRIORITY: Advocates and two state lawmakers announced Thursday that they plan to prioritize bills during the 2022 legislative session that would bar police from questioning kids without their parents’ knowledge and reform the juvenile court system. Hannah Gaskill/Maryland Matters.

TOP HOUSE ADVISOR TO START PR FIRM: A top aide to the last two leaders of the House of Delegates will leave her post at the end of the year. Alexandra Hughes, 44, will be missing from her usual spot on the rostrum within earshot of House Speaker Adrienne Jones when the 2022 session starts. A fixture in the speaker’s office for 15 years, Hughes will leave to start her own Annapolis public relations firm. Bryan Sears/The Daily Record.

SPORTS BETTING STARTS: Baltimore-area casinos opened their sportsbooks to the public Friday, part of the launch of long-awaited in-person sports betting in Maryland. Before a buzzing crowd at Baltimore’s Horseshoe Casino that included casino employees and actors dressed as Julius Caesar and Cleopatra, Gov. Larry Hogan and Mayor Brandon Scott and others cut the ribbon for the 15,000-square-foot sports betting room in the South Baltimore casino. Emily Opilo/The Baltimore Sun.

GOVERNOR’s CANDIDATES FORUM A BIG DRAW: The event is billed as an effort to promote issues deemed important to Montgomery County, but over eggs and bacon, the real business was politics and campaigning for governor. The crowd was among the largest, despite the pandemic, which required attendees to show proof of vaccination. Ana Radelat/Bethesda Beat.

FRANCHOT HAD PREVIOUS COMMITMENT: Comptroller Peter Franchot’s gubernatorial campaign insisted on Friday that his decision to pass on a high-profile candidate forum was not part of an orchestrated effort to avoid debates. Bruce DePuyt/Maryland Matters. 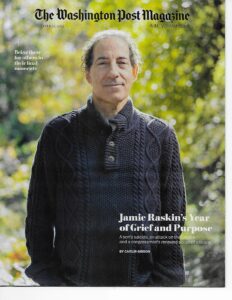 RASKIN’S YEAR: Rep. Jamie Raskin was on the cover of The Washington Post Magazine Sunday for a long story on his “Year of Grief and Purpose. A son’s suicide, an attack on the Capitol and a congressman’s renewed sense of mission.”

NEPHEW’s DEATH PUSHES TRONE TO FIND SOURCE OF OPIOID CRISIS: Five years after the death of his nephew, David Trone went to Mexico looking for the source of what killed him: the opioid epidemic. It was official business — a trip last month in his capacity as co-chair of the Commission on Combating Synthetic Opioid Trafficking — but now it was hard to separate the personal from the official, as almost everything the Maryland Democrat was doing in Congress found its way back to Ian. Meagan Flynn/The Washington Post.

IVEY POLL GIVES HIM LEAD IN RACE FOR CONGRESS: A poll conducted last week for Glenn Ivey’s congressional campaign showed him with a substantial lead over the two other Democrats who have entered the 4th District primary to replace U.S. Rep. Anthony Brown — but with more than half of the voters still undecided. Josh Kurtz/Maryland Matters.

CRITICS SAY BA CO SHOULD CREATE 2nd BLACK-MAJORITY DISTRICT: Critics of Baltimore County’s redistricting proposal say demographic data supports creating a second majority-Black district, despite claims from County Council members and other plan architects that it can’t be done. The Baltimore County Council is forging ahead with a draft that maintains one majority-Black district out of seven in a county that is 30% Black and 45% nonwhite. Taylor DeVille/tHE Baltimore Sun.

500+ ARUNDEL COUNTY WORKERS GET $1,000 CHECKS FOR VAXX: More than 500 county employees collected a $1,000 check from Anne Arundel County after getting vaccinated against COVID-19 between September and the end of November, according to a Friday news release announcing the results of an incentive program. An additional approximately 4,270 employees were already vaccinated and received the $1,000 as well. Dana Munro/The Capital Gazette.

CARROLL RAISES PAY FOR SUBSTITUTE TEACHERS: To attract more substitute teachers and retain the ones already working in the school system, the Carroll County Board of Education voted Wednesday night to increase pay rates by $30-$50 per day for the remainder of the 2021-22 school year. Cameron Goodnight/The Carroll County Times.

HARFORD STUDENTS WALK OUT OVER RESPONSE TO ASSAULTS: Students at Aberdeen High School in Harford County staged a walkout Wednesday in response to allegations the school administration is not taking accusations of sexual harassment and assault seriously. Callan Tansill-Suddath/The Aegis

REMOVED CONFEDERATE STATUES HEAD TO LA SHOW: Baltimore’s Confederate statues, removed from public view in the middle of the night in 2017, are heading to California where they will be put on display in a museum exhibit in 2022. Ed Gunts/Baltimore Fishbowl.