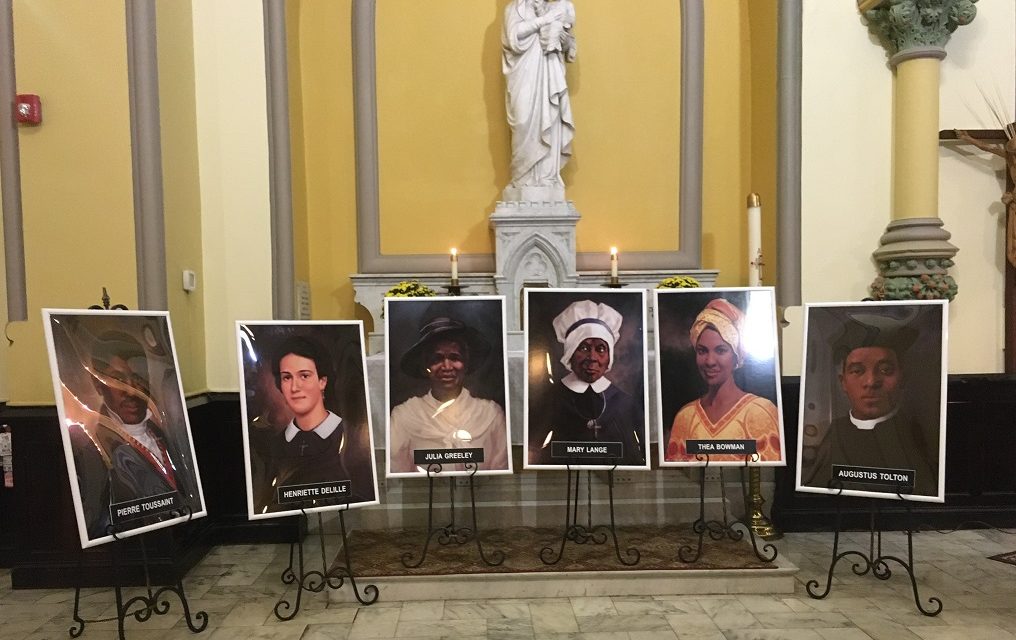 At the Catholic bishops meeting in Baltimore this week, the push for sainthood for six African American Catholics got a brief shout out. A Baltimore group is petitioning Pope Francis to declare them saints. The six were honored on All Saints Day, Nov. 1, at St. Ann’s church in East Baltimore. https://www.change.org/p/his-holiness-pope-francis-support-the-canonization-of-the-six-african-american-candidates-for-sainthood/ MarylandReporter.com photo

SPORTS BETTING LICENSES GRANTED AFTER LENGTHY DELAY: The Sports Wagering Application Review Commission finally granted approval for five casinos to start sports betting, Bryan Sears reports for The Daily Record. The commission debated for more than 90 minutes before approving the licenses that had been stalled since early Oct., and questions continued about equity for Black and women-owned businesses.

SPOTLIGHT ON ENVIRONMENTAL LEADERSHIP: More than 20 months since the onset of the COVID-19 pandemic, the environmental impact of the virus has illuminated existing inequities in Maryland, while also offering a blueprint for the future, Alex Argiris analyzes for the Capital News Service in Maryland Reporter.

BALTIMORE COUNTY REDISTRICTING DOES NOT ADDRESS EQUITY CONCERNS: A new Baltimore County redistricting plan introduced Monday fails to create a second majority-Black district despite calls to do so by civil rights groups and residents at a public hearing, Taylor Deville reports for the Sun on a map that the Sun obtained on Tuesday.

TOLL SCHEDULE FOR D.C. SUBURB HIGHWAY TOLL LANES APPROVED: Tolls for the Capital Beltway and Interstate 270 will cost up to $3.76 per mile under final toll rates approved Thursday by the board for the Maryland Transportation Authority, Katherine Shaver reports for the Post. The new toll lanes will allow drivers in passenger vehicles to buy their way out of traffic congestion and would cost up to $45 total for drivers in heavy traffic over the entire 12-mile stretch, and up to $22 per mile for tractor trailers.

BALTIMORE COUNTY BUS DRIVERS RALLY, CALL OUT: Overwhelmed bus drivers for Baltimore County Public Schools say the job has become increasingly arduous with demands that do not match the pay – fueled in part by the gaping hole in their workforce and a recent “call out” effort, Alexis Taylor reports for the AFRO.

PARROTT KICKING OFF CONGRESSIONAL RUN: In Garrett County, Republican Del. Neil Parrott kicked off his campaign for U.S. Congress by telling voters they should elect a Western Maryland representative to the seat currently held by U.S. Rep. David Trone, Joseph Hauger reports for the Garrett County Republican. Garrett County is a “great place, and we should make sure that it’s represented in D.C.,” Parrott said. “Unfortunately, right now the vote from Garrett County is totally diluted by the vote from Montgomery County.”

JUVENILE CENTER CLOSING IN WESTERN MD, SURPRISING LOCALS: Allegany County Board of Commissioners President Jake Shade was surprised and disappointed in a state proposal to close the Green Ridge Youth Center in Flintstone, Teresa McMinn reports for the Cumberland Times-News. Citing population, demographics and location, the Maryland Department of Juvenile Services plans to close the 30-bed Green Ridge center in fiscal 2027, as well as the six-bed Mountain View facility in Swanton in Garrett County.

ELEMENTARY SCHOOL REQUIRING VACCINE: Concerned parents are questioning a Baltimore County private school’s decision to require the COVID-19 vaccine for all of its students K-8th grade, Amy Simpson reports for WBFF. The Kreiger Schechter Day School’s policy calls for all students to have a first dose by Dec. 17, or they will not be welcome back in January.

CARROLL DELEGATION APPROVES NEW DISTRICT MAP: A new commissioner district map in Carroll County has been approved, Madison Bateman reports for the Carroll County Times. The delegation of Carroll County’s lawmakers approved the map change at a public hearing based on information from the U.S. Census; the Board of Commissioners had no role in the process.

FREDERICK LAWMAKERS GEAR UP FOR SESSION WITH LOCAL BILLS: Frederick County’s delegation of state lawmakers appeared confident a county proposal to change the process by which vacancies are filled for the county’s Board of Education, which failed the last two years in Annapolis, could pass in the upcoming session, Jack Hogan reports for The Frederick News-Post. The proposal from Councilman Steve McKay (R) would put board vacancies on election ballots, though an appointee would still fill the open seat before the election.

RULING LIMITS CIVIL CONTEMPT: A new limit on civil contempt has been set by Maryland’s second highest court, Steve Lash reports for The Daily Record on a custody case in which a woman had briefly refused to return her child to the custodial father. People cannot be held in civil contempt for having violated a court order if they have come into compliance with it and intend to remain so, the Court of Special Appeals ruled.