Environmental lessons for Maryland in wake of COVID-19

Listen to this article
By ALEX ARGIRIS
Capital News Service

ANNAPOLIS, Md. — More than 20 months since the onset of the COVID-19 pandemic, the environmental impalact of the virus has illuminated existing inequities in Maryland, while also offering a blueprint for the future.

Here are a few environmental takeaways from the pandemic in Maryland:

Marylanders reconnected with the outdoors

After Gov. Larry Hogan, R, instituted stay-at-home orders at the onset of the pandemic, many Marylanders turned to the outdoors in record numbers.

“I think early on people recognized the health benefits and therapy associated with being outdoors,” Maryland Secretary of the Environment Ben Grumbles said in an interview with Capital News Service.

In 2020, state parks welcomed about 21.5 million visitors, a 45% increase from 2019, according to data from the Maryland Department of Natural Resources.

Landau noted that throughout her own hiking experiences on trails in Maryland over the last year and a half, there has been a marked increase in foot traffic.

The reconnection with nature might give Marylanders a fresh perspective on the environmental challenges facing the state, as populous coastal cities like Annapolis continue to feel the impact of severe flooding.

“I’m hoping that the result is that more people will reach out to their legislators and say ‘Hey, you need to protect more open space for us’ … so that there’s more places where they can go safely,” Landau said.

Medical waste from hospitals may have increased

As hospitals dealt with surges in patients at the height of the pandemic, medical supplies were cycled through in higher numbers.

The increased use of disposable masks alone has become a significant environmental challenge.

Over 1.5 billion face masks ended up in the oceans worldwide in 2020, according to research from OceansAsia, a nonprofit marine advocacy organization.

In addition to masks, other disposable medical supplies like syringes affected the waste stream.

“There’s been an introduction of high-magnitude material into the waste stream,” Sacoby Wilson, an environmental health scientist and associate professor at the University of Maryland Institute for Applied Environmental Health, told Capital News Service in an interview.

There have been 51,502 hospitalizations from COVID-19 in Maryland as of Nov. 17, according to data from Maryland’s health department.

Maryland has also administered nearly 9 million doses of the COVID-19 vaccine, with each dose requiring the use of a new syringe.

However, Trey Krell, vice president of Biomedical Waste Services in Maryland, said the processing of medical waste has been a bit of a roller coaster throughout the pandemic.

Even though there have been times when he has noticed a slight increase in medical waste, Krell said, that bump has often been offset by the lack of elective surgeries that were taking place in hospitals.

Maryland is very likely experiencing increased air pollution from the increased incineration of medical waste, according to Megan Latshaw, an associate scientist in Environmental Health and Engineering at the John Hopkins Bloomberg School of Public Health.

There are also environmental justice concerns associated with the increase in waste streams, as lower income neighborhoods and communities of color tend to experience the brunt of the waste, according to Wilson.

One benefit amidst the public health crisis and economic closures in 2020 was lowered emissions.

With increased teleworking leading to fewer cars on the road, air pollution dropped substantially in Maryland, according to air quality data from the Maryland Department of the Environment.

Nitrogen oxide decreased about 15%, and carbon dioxide and carbon monoxide each saw a 30% reduction from roughly mid-February to late May 2020.

Emission levels have nearly returned to pre-pandemic levels in 2021 despite the significant dip last year, according to Russell Dickerson, a professor in the Department of Atmospheric and Oceanic Science at the University of Maryland.

“Early on, it was like an unintended experiment where we got excellent data through our department and our air monitors and our meteorologists and also through the University of Maryland and the National Oceanic and Atmospheric Administration and NASA,” Grumbles said.

As of Oct. 25, statewide weekly traffic remained 6.5% below 2019 levels, according to data from the Maryland Department of Transportation.

However, statewide weekly truck volume had increased by 13% compared to 2019 levels as of Oct. 25, likely a result of the increase in deliveries as consumers continue to shop online in higher numbers during the pandemic.

Grumbles said he hopes that the data gathered during the pandemic will offer a framework for reducing emissions long term.

“We really need to focus on zero-emission vehicles for the future,” he said.

Hogan previously announced plans to widen I-495 and I-270 through a public-private partnership, and has also pushed for an increase in use of electric cars, buses and trucks across the state.

In addition to increasing zero-emission vehicles on the road, another policy objective Grumbles suggested is to simply limit the number of cars altogether.

Grumbles said that many companies could consider teleworking as a permanent option for employees, and improving broadband internet access across the state might serve as a vehicle for driving that change.

“I think a lot of people are recognizing that maybe they don’t need multiple cars,” Landau said.

The push from the Hogan administration for reducing emissions from cars comes amid the Nov. 5 passage in Congress of a $1.2 trillion infrastructure package, which includes nearly $8 billion for Maryland to improve its transit systems, railways, clean water systems, roads, bridges and tunnels.

Increasing accessibility to mass transit also presents an opportunity to lower emissions in Maryland, as construction of the Purple Line light rail across Montgomery and Prince George’s counties continues, according to Wilson.

Wilson argued that such investments in mass transit should be prioritized.

Hogan has argued that the plan to expand the highways in Maryland via a private partnership is a model for improving infrastructure without raising taxes. 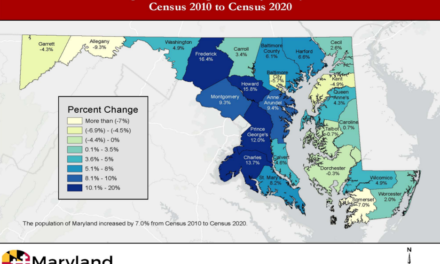