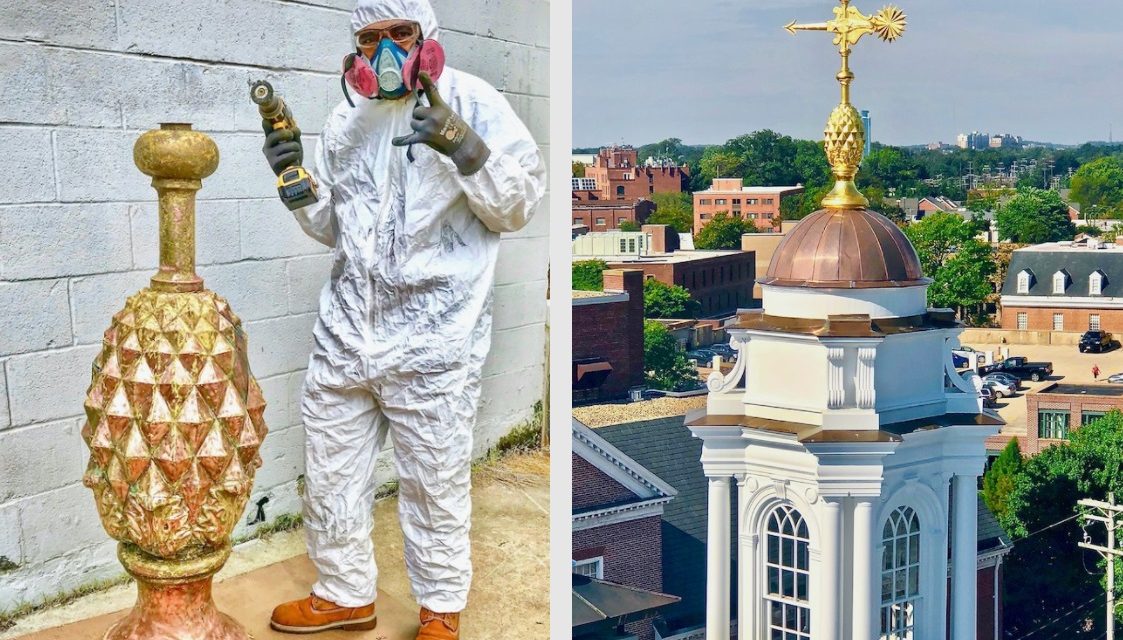 Regilding the finial on the old Annapolis post office, now a state office building. The piece was brought back to Wagner Roofing’s in-house sheet metal studio where the company’s craftsmen stripped and repaired some of the ornate details that had fallen off over the past century. Once repaired, Wagner called in the services of Gold Leaf Studios to have the piece gilded with 23.75 karat double-weight gold. Wagner Roofing photos for the Preservation Maryland website

GENERAL ASSEMBLY RELEASES FOUR DRAFT MAPS: Leaders of Maryland’s General Assembly released four draft maps for the state’s new congressional districts, a slate of options to redraw the voting lines for Maryland’s eight U.S. representatives that will be debated during a special legislative session next month, Bryn Stole and Pamela Wood report in the Sun.

SCHULZ, PEREZ DISAGREE OVER JOBLESS INSURANCE MANAGEMENT: Maryland’s 2022 gubernatorial election may be a year away but the race is already heating up. This week state Commerce Secretary and GOP establishment favorite for governor Kelly Schulz and former DNC chair and Democratic gubernatorial candidate Tom Perez sparred over the Hogan administration’s pandemic stewardship of the state’s unemployment insurance system in separate interviews with Bryan Renbaum of MarylandReporter.com.

BANNER SEEKS OFFICES: The Baltimore Banner is on the hunt for office space in the central business district as the local news startup funded by Choice Hotels International Chairman Stewart Bainum Jr. looks to launch by June. The article includes a Q&A with Banner publisher Imtiaz Patel on a number of issues about content and revenue model.  Melody Simmons reports in the Baltimore Business Journal.

LAWMAKERS CONSIDER COMPLIANCE FOR AUDIT SCOFFLAWS: Lawmakers, irritated with a growing number of unsatisfactory audits of state agencies, said legislation may be needed to force compliance, reports Bryan Sears for the Daily Record. Members of the Joint Audit and Evaluation Committee made the threat as they pressed Budget Secretary David Brinkley and others Tuesday for answers.

LEGAL CANNABIS TO BE HOT TOPIC IN ANNAPOLIS: Maryland lawmakers have begun grilling experts on marijuana policy over the past week as politicians gear up for a looming legislative session where legalizing the drug for adult recreational use appears slated to be a top issue, Bryan Stole reports in the Sun.

ATTERBEARY TO HEAD HOUSE WAYS & MEANS: Howard County Del. Vanessa Atterbeary is the new chairperson of a committee in the state legislature that handles taxes, gambling and education issues, Pamela Wood of the Sun reports. Atterbeary, a Democrat, was named to lead the House of Delegates Ways and Means Committee on Tuesday by House Speaker Adrienne Jones.

STAFF SHORTAGE TO SHUT MO CO SCHOOLS BEFORE THANKSGIVING: Montgomery County schools will be closed the day before Thanksgiving as the district expects a substitute teacher shortage to hamstring operations, Caitlynn Peetz reports for Bethesda Beat.

BIDEN HEADS TO PORT OF B’MORE TODAY: The Port of Baltimore that President Joe Biden plans to visit Wednesday to showcase his port infrastructure initiatives remains a small player in the nation’s supply chain that still is recovering from the effects of the coronavirus pandemic.

ANNAPOLIS MAYOR, COUNCIL ALL DEMS: Mayor Gavin Buckley was elected to a second term as mayor of Annapolis and all eight Democratic City Council candidates swept their respective races, the first time in at least 70 years that one party will control the mayor’s office and the legislature, Brooks DuBose of the Capital Gazette reports. 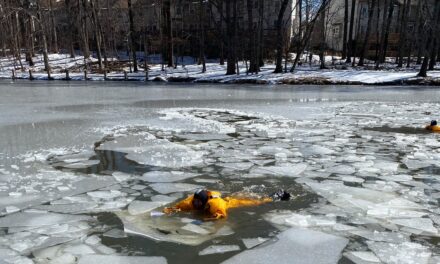