SUSPICIOUS ACTIVITY AT ELECTION: Michael Dresser of the Sun reports that Maryland’s State Board of Elections detected “suspicious activity” on the computer system it uses for online voter registration before last fall’s election and called in cybersecurity experts to evaluate it, administrator Linda H. Lamone said Wednesday. Lamone’s disclosure came in response to an inquiry by the Sun amid reports that Russian cyberattacks had breached election systems in 39 states. Lamone said the system was not penetrated. She said the activity did not compromise vote tabulation.

QUESTIONS ON FBI HQ BIDDER: Democratic congressman from Virginia is questioning the ethics of having a company with ties to President Donald Trump among the competitors to build a proposed new FBI headquarters  — a $2 billion project Maryland officials hope will be built in Prince George’s County, reports John Fritze in the Sun.

MD PANEL TO MONITOR FED FINANCE LAWS: Less than a week after the U.S. House of Representatives voted to dismantle much of the Dodd-Frank banking regulations Act, the leaders of Maryland’s General Assembly named the majority of members to a state panel created to monitor changes to federal financial consumer law, reports Bryan Sears for the Daily Record.

HOGAN INTRODUCES CITY BUS OVERHAUL: Gov. Larry Hogan, returning to the site where he had vowed a year and a half earlier to remodel the region’s bus system, said Wednesday that he had fulfilled his promise, Colin Campbell of the Sun reports. The Republican governor’s $135 million BaltimoreLink route overhaul — a complete redesign intended to better connect people to jobs, entertainment and other modes of transit — is set to launch at 3 a.m. Sunday.

RACE & RX POT: While the article doesn’t address Maryland, it does address an issue in Maryland: Rose Hackman of the Guardian takes a look at racial inequality in the billion-dollar U.S. medical marijuana industry.

EARLY EDUCATION FOR COMPUTER CODING: In advocating for early education of computer coding, gubernatorial candidate Alec Ross in an op-ed for the Sun opines that “today in Maryland public schools, we require students to take courses in a foreign language — Spanish, French, German — because learning a language enriches their lives and helps them interact in a more interconnected world. That’s a wonderful thing. But unfortunately, we’re doing a terrible job teaching our children the language that’s now driving the economy.” 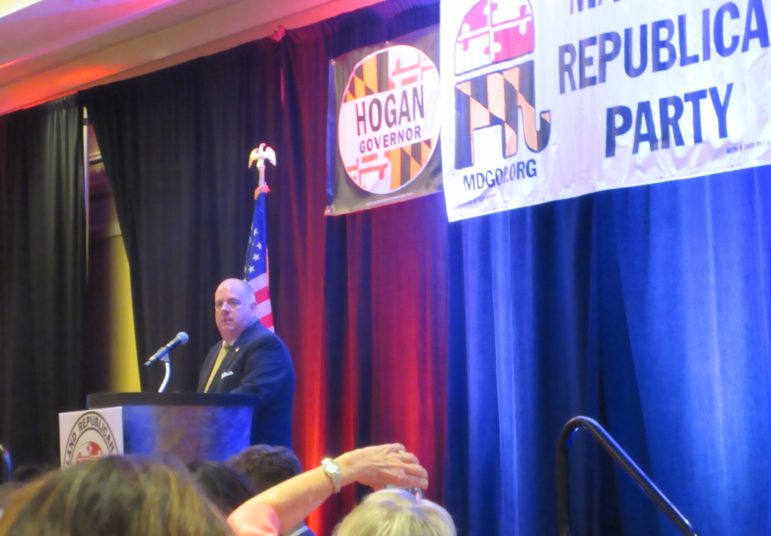 HOGAN CHEERLEADS FOR MD GOP: Gov. Larry Hogan, who for much of the past two years kept his distance from his fellow Republicans, sounded like the party’s cheerleader at its annual Red, White and Blue dinner Wednesday night, Ovetta Wiggins of the Post reports. Despite Democrats’ earlier predictions of the state GOP party’s demise, Hogan told the crowd that the Maryland Republican Party continues to be “better, stronger and more relevant” than it ever has been.

HOGAN CAMPAIGN STAFF: Erin Cox of the Sun writes that Gov. Larry Hogan has announced the top staff for his re-election bid, another sign the 2018 campaign season is already under way. Hogan’s campaign manager is Ryan Reynolds. He comes from the Washington polling firm WPA Intelligence, which has worked with Hogan. The governor’s campaign also hired general consultant Jim Barnett.

REACTION TO CONGRESSIONAL SHOOTING: The Sun gathered reaction to the shooting Wednesday morning of House Majority Whip Steve Scalise (R-La.), a House staffer, and two Capitol police officers in Virginia. from current and former Maryland politicians including Gov. Larry Hogan, who said in part, “The First Lady and I send our prayers for a speedy recovery to Congressman Scalise and all those who were injured.”

FROSH ON EMOLUMENTS CLAUSE: Marc Steiner of WEAA-FM holds a half-hour conversation with Maryland Attorney General Brian Frosh who talked about his suit (filed along with Washington, DC, Attorney General Karl Racine) against President Donald Trump, alleging that he violated anti-corruption clauses in the Constitution by accepting payments and benefits from foreign governments since moving into the White House.

CANDIDATES COURTING: Ana Faguy of Maryland Matters writes that Montgomery County, in all its guises, came out for the 58th annual Montgomery County Chamber of Commerce dinner Tuesday night. Local government officials, business leaders and educators were there to celebrate the 2017 award recipients and witness the swearing-in of the chamber’s new board of directors. With an election year ramping up, the chamber is one of many interest groups that candidates are courting.