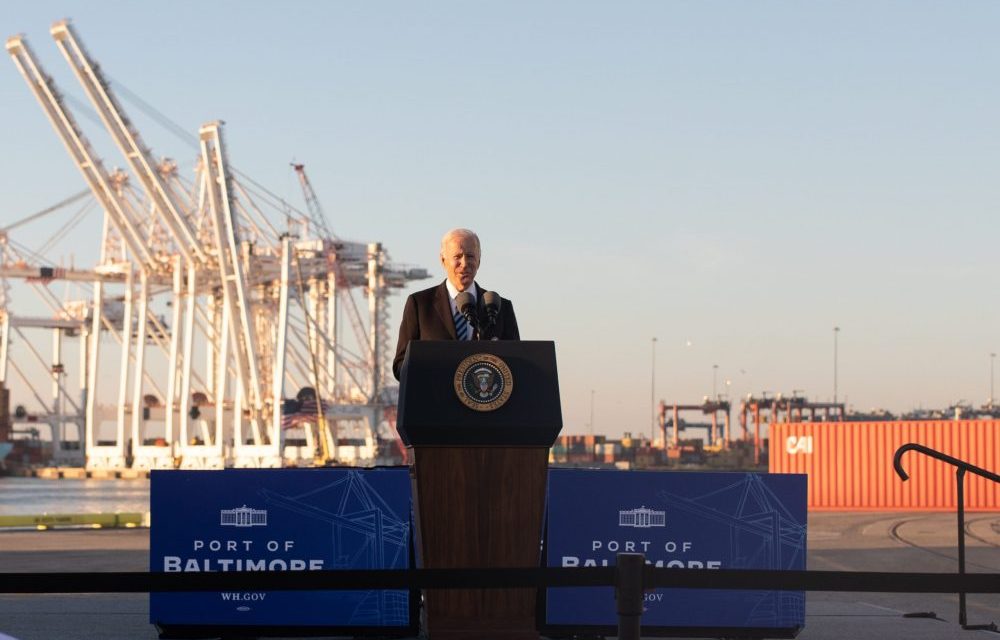 With the Port of Baltimore behind him, President Joe Biden on Wednesday spoke about the benefits of his just-passed infrastructure bill. (Brittany N. Gaddy/Capital News Service)

Listen to this article
By KELLY LIVINGSTON and BRITTANY N. GADDY
Capital News Service
BALTIMORE – Against a backdrop of container ships in the Port of Baltimore, President Joe Biden on Wednesday called his just-passed $1.2 trillion infrastructure bill a “once-in-a-generation investment” that eventually will ease supply chain congestion and boost the nation’s economy.

The Baltimore facility, which Biden called “one of the best ports in the country,” is set to benefit from the infrastructure legislation passed by the House on Friday. The measure, which funds highways, bridges, water projects and public transportation, will be signed into law on Monday, the White House announced shortly before the president’s visit.

The infrastructure package includes $17 billion for ports around the nation, a sum that the president said “represents the biggest investment in ports in American history.”

The Port of Baltimore is an economic driver in Maryland, responsible for the import and export of cars as well as farm and construction equipment. Over 15,300 people work directly at the port. It generates an additional 139,000 jobs in the region.

Investment in ports comes as the national supply chain has been disrupted amid the COVID-19 pandemic, affecting many industries and driving up consumer prices.

Biden’s Baltimore visit was the first of what are expected to be several presidential trips in coming weeks to tout not only the infrastructure bill but a second, larger measure that would provide $1.75 trillion in new social program spending. That second bill remains in negotiations among House and Senate Democrats.

“And thanks to both steps we’re taking, very soon we’re gonna see the supply chain start catching up with demand,” Biden added. “So, not only will we see more record-breaking job growth, we’ll see lower prices, faster deliveries as well. This work is going to be critical as we implement the infrastructure bill, and as we continue to build the economy from the bottom up.”

“We need to unlock the full might and dynamism of our economy,” Biden said.

A portion of the infrastructure bill’s port funding allocation will go toward a $2.25 billion Port Infrastructure Development and Grants program through the Department of Transportation that the Port of Baltimore can apply for.

About $5 billion in additional funding will be funneled through the Army Corps of Engineers for construction projects including ports and inland waterways.

Before Biden took the stage, he was preceded by Hogan, a Republican, and other government officials.

Hogan said the overhaul of Baltimore’s Howard Street Tunnel to allow trains to carry double-stacked containers between the city and Philadelphia will increase production and add up to 10,000 new jobs.