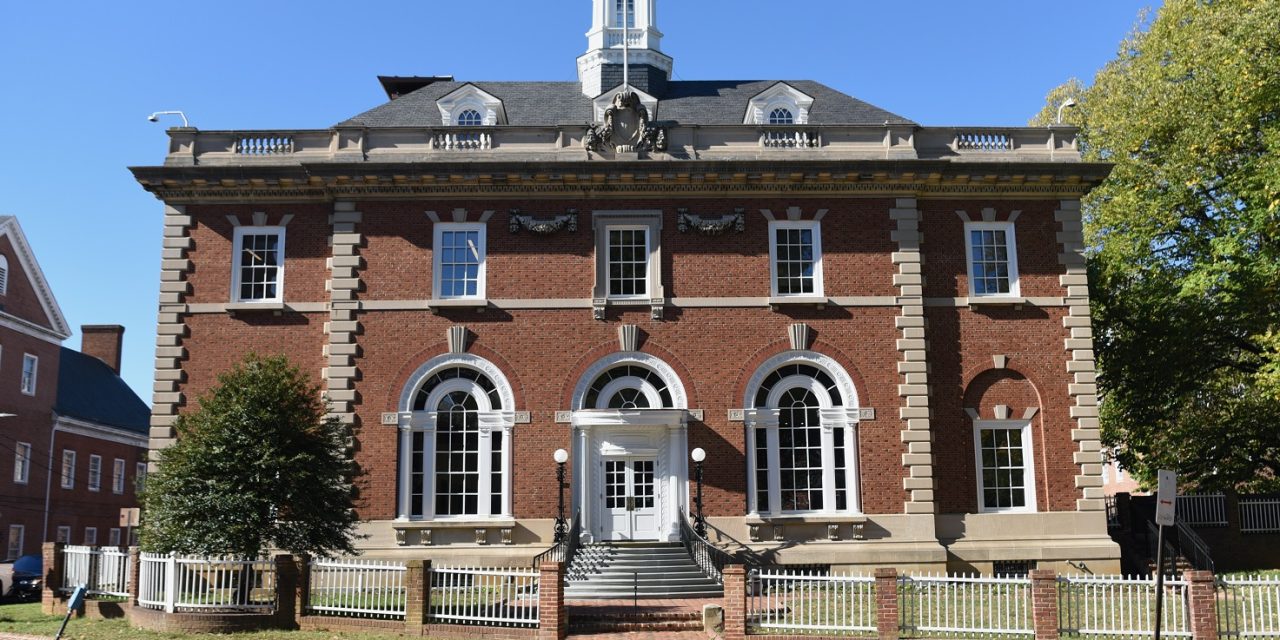 The years-long renovation of the old Annapolis Post Office on Church Circle has been completed and is now home for some of the governor's offices. The 1901 structure was purchased by the state for $3.2 million in 2013 and $16 million was budgeted for its restoration. Governor's Office photo by Patrick Siebert.

DEM EXPERT: MD WON’T RESPOND TO YOUNGKIN TACTICS: Maryland Republicans should be careful not to emulate the type of campaign Glenn Youngkin ran to get elected governor of Virginia if they want to have a chance of holding on to the governor’s mansion in 2022, former Democratic National Committee chair and gubernatorial candidate Tom Perez said in a report by Bryan Renbaum for Maryland Reporter. But several nonpartisan experts said Youngkin’s type of campaign could have broader appeal in many states if it focused on the economy and providing a quality education in the wake of virtual learning.

MCGRATH RELEASES TEXTS, DOCUMENT: Roy McGrath, the former chief of staff to Gov. Larry Hogan facing state and federal criminal charges, says the governor approved his controversial payout from a state agency — and claims to have a document proving it, Pamela Wood reports for the Sun.

VACCINE MANDATE COMING TO LARGE EMPLOYERS: Large private companies will need to fully vaccinate employees for COVID or begin testing employees who decline vaccination by early January under rules announced by the federal Occupational Safety and Health Administration Thursday, Bryn Stole reports for the Sun. But it may not be possible for Maryland’s workplace safety organization to adopt requirements in time for the deadline, since it has been given only 30 days to fully adopt the new regulations and has a legally mandated regulatory review process which also requires approval by a committee of state lawmakers.

CAMPAIGN TO CONVINCE PARENTS, VACCINATE KIDS BEGINS: Baltimore Mayor Brandon Scott says the time for children to be vaccinated is now, and the health department will be offering Pfizer vaccines for children ages 5 to 11 next week, Sarah Kim reports for WYPR.

LOCAL VACCINE MANUFACTURER BACKS OUT OF FEDERAL PROGRAM: The specialty pharmaceutical manufacturer that operates the troubled Baltimore facility where millions of Johnson & Johnson vaccines went to waste this year is ending its contract to produce COVID vaccines, Hallie Miller reports for the Sun. Emergent BioSolutions announced the end of its involvement Thursday in a federal program that prepares for and responds to infectious diseases and other threats to public health.

DEPUTY COMPTROLLER LEAVING: Maryland’s deputy comptroller, Sharonne Bonardi, is leaving at the end of the year to become executive director of the Federation of Tax Administrators. Comptroller Peter Franchot said Thursday he has named Andrew Schaufele, the current director of the Bureau of Revenue Estimates (BRE), to succeed her, effective Jan. 3. Current BRE Chief Economist David Farkas will be the bureau’s interim director. Josh Kurtz reports in Maryland Matters.

OBJECTIONS TO CONTINUED CITY HALL CLOSURE: Baltimore’s City Hall still remains closed even as the rest of the city opens, Rielle Creighton reports for WBFF. Meetings are live streamed but the city can shut down a mic or a screen.

NO MASK MANDATE IN MOCO: Montgomery County will no longer be reinstating an indoor mask mandate next week, as long as the county confirms the data showing the county falls under “moderate” transmission rates, Steve Bohnel reports for Bethesda Beat.