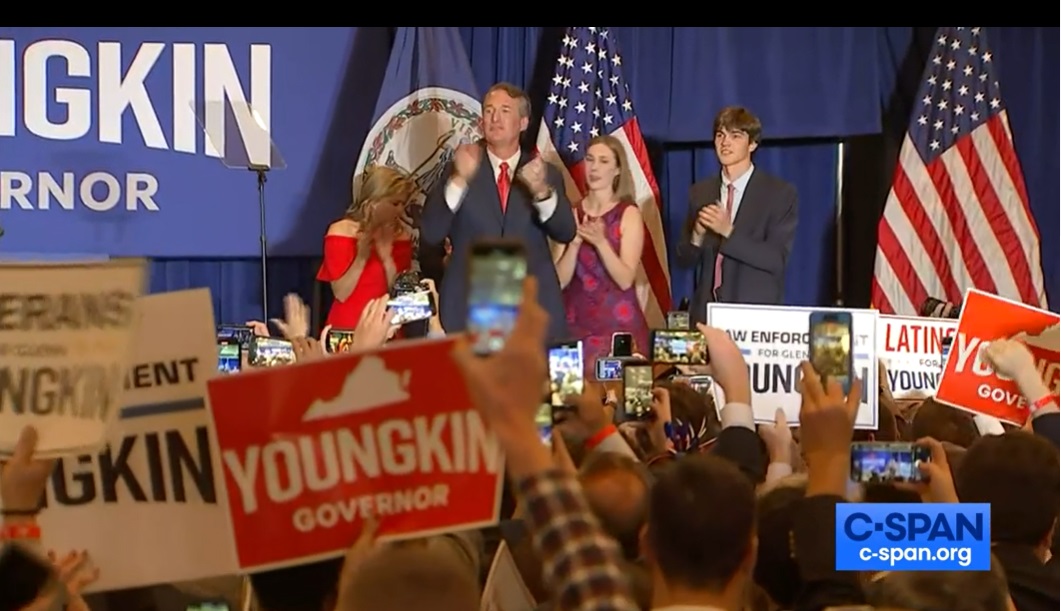 Gov. Larry Hogan congratulated Glenn Youngkin on his victory in Virginia on his Facebook page: "Congratulations to Governor-elect Glenn Youngkin! I was proud to campaign for Glenn because he focused on solutions and uniting Virginians. This is proof common sense conservatives can win in 2022, and it's a clear message to President Biden to stop his march to the far-left."

Maryland Republicans should be careful not to emulate the type of campaign Glenn Youngkin ran to get elected governor of Virginia if they want to have a chance of holding on to the governor’s mansion in 2022, former Democratic National Committee chair and gubernatorial candidate Tom Perez said.

Younkin’s campaign, according to many pundits, was a divisive one.

A key issue for the campaign related to the intense opposition by many parents to the teaching of Critical Race Theory in schools.

However, Virginia, which was once home to the capital of the Confederacy, has for the last decade been a Democratic stronghold with the party holding the state’s top office since 2014 and both U.S. Senate seats since 2010.

“I think Maryland is a fundamentally different state than Virginia. We are a majority people of color state. And we are embracing that,” Perez told MarylandReporter.com on Thursday.

Perez attributed Yougnkin’s victory to successfully capitalizing on racial fears and resentments and said such tactics are unlikely to gain traction in Maryland.

“You know you are going to have dog whistle politics. Glenn Youngkin said he would ban critical race theory on day one. Critical Race theory is not in the Virginia curriculum. It is like me saying I am going to ban martians from voting on day one. Martians do not vote.”

Perez, who faces eight primary opponents in his bid for the nomination, argued that the Democratic strategy for winning elections is quite different than that of Republicans.

Richard Vatz, a professor of political persuasion at Towson University, said Democrats have exaggerated the extent to which Youngkin’s campaign focused on Critical Race theory.

“I believe Perez’s first premises are incorrect and thus his conclusion is a non-sequitur: to argue that Youngkin’s campaign excessively focused on Critical Race Theory misses the point that Youngkin’s major point was that parents and maybe particularly mothers should have “excellence in our schools…” and curriculum “that includes listening to parents’ input.”

“The focus on education in the last weeks of the campaign energized parents –white and Black, as it turned out-and may have made the difference in his 2%+ win. Critical Race theory was criticized secondarily as a source of division by Youngkin, which might not be inappropriate for Maryland’s campaigns going forward. His Lt. Governor-elect, Winsome Sears, is Black and eloquent and charismatic  and does not, to say the least, contribute to the claim of racism in his campaign,” Vatz added.

“What happened in VA, and in NJ, was about far more than critical race theory. Both states saw significant movement toward Republicans even in more diverse, highly educated suburbs. Voters are seeing rising prices, empty shelves in stores, and an economy still hampered by COVID. Parents are concerned about the quality of education in general after 18 months of closures and remote learning. Fair or not, the party in the White House enjoys the credit when things are going well and voters are happy, but carries the blame when things are not going well and voters are unhappy. A campaign focused on education as well as on basic pocketbook issues would likely be received quite well in Maryland.”

Gov. Larry Hogan, who is widely viewed as a moderate Republican and has broad bipartisan support, enthusiastically backed Youngkin’s campaign.