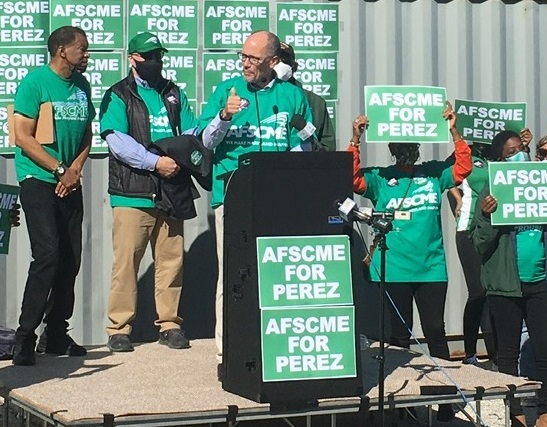 Comptroller and Democratic gubernatorial candidate Peter Franchot said he is not concerned that one of his primary opponents recently received an endorsement from two Maryland councils of the largest public employee trade union in the nation.

Nine Democrats are running for governor and Franchot and Perez are both widely viewed as being among the leading contenders for the nomination.

“I have the endorsement of the largest skilled construction building trade union in the state and the country. All of these endorsements are appreciated obviously by the candidates. But none of them are particularly crucial to our campaign,” Franchot told MarylandReporter.com last week.

“I am very quietly confident that I am campaigning like I am 10 points behind even though I am not. I have complete respect and admiration for my opponents. But I believe that Monique and myself are an unbeatable ticket,” Franchot added.

Perez told MarylandReporter.com earlier this week that he did not want to speculate about whether the AFSCME endorsement is a political game-changer but he did say that it is nevertheless a significant development.

“A big part of our multi-racial every county coalition is our labor union partners. These are not only state employees but a number of local employees too. AFSCME Council 3 and Council 67…there are 100 locals in those two councils over 800 worksites and over 15,000 public sector employees.”

Perez noted that AFSCME is not the only major union to have endorsed his campaign.

Perez said the “timing” of the union endorsements suggests that his campaign is seen as gaining momentum.

“Ordinarily most unions wait until shortly before the election to endorse candidates. And so many unions have come forward and come forward very early. The beauty of that and the importance of that is that we are getting out there early…Not just ASFCME. But the other unions that have endorsed me are already having peer-to-peer contact with their membership.”

Sen. Cory McCray, D-Baltimore City, who supports Perez’s candidacy, said the AFSCME endorsement is a game-changer and cannot be understated.

McCray attributed the AFSCME endorsement to the strength of Perez’s campaign organization.

“I think that in reference to having already built infrastructure, that this is very very good for the Perez campaign.”