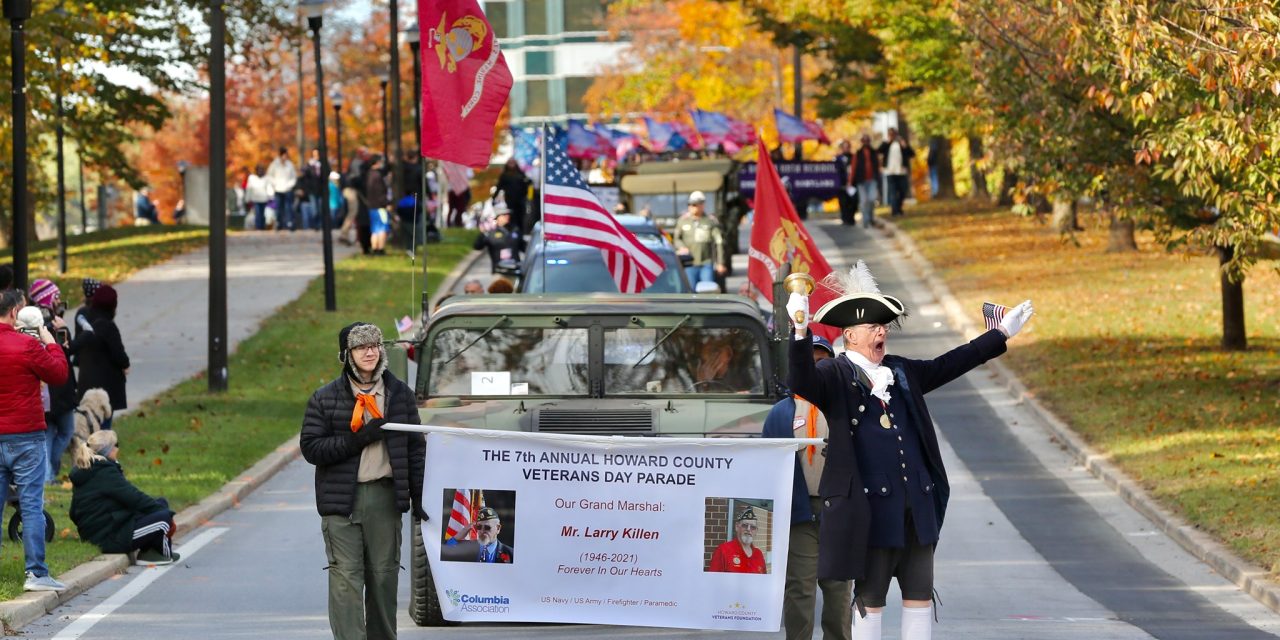 There was a Veterans Day parade in downtown Columbia Sunday morning. From the Facebook page of Howard County Executive Calvin Ball.

FRANCHOT SHRUGS OFF ENDORSEMENTS OF OPPONENT: Comptroller and Democratic gubernatorial candidate Peter Franchot said he is not concerned that one of his primary opponents recently received an endorsement from two Maryland councils of the largest public employee union in the nation, Bryan Renbaum of Maryland Reporter writes.

MARYLAND SET TO GET $6B IN INFRASTRUCTURE AID: Maryland is slated to receive as much as $6 billion from the roughly $1 trillion infrastructure package approved by the U.S. House Friday night, money intended to improve roads, bridges, transit systems, broadband and bolster Chesapeake Bay restoration, Jeff Barker and Alex Mann report for the Sun.

BIDEN TO VISIT B’MORE TO TOUT INFRASTRUCTURE PACKAGE: Jeff Barker and Christine Condon of the Sun report that President Joe Biden will visit Baltimore this week — his second trip to the city in three weeks — and tout the just-passed infrastructure package and its effect on ports and supply chains. The president will tour the Port of Baltimore on Wednesday.

COVID SHOTS FOR KIDS EASE MINDS OF MANY PARENTS: For many Maryland parents and guardians, a long, worrisome period of the pandemic is drawing to a hopeful close, as federal regulators have authorized COVID-19 vaccinations for elementary school-aged children, Hallie Miller of the Sun reports.

NEW FACES EXPECTED IN ALL TOP STATE OFFICES: Over the next year, each of the top statewide offices in Maryland will feature new faces, a rare occurrence in state history that may offer an opportunity for fresh ideas to take root — or not, depending on who wins, reports Pamela Wood of the Sun.

RETIRING SEN. YOUNG ENDORSES DEL. YOUNG TO REPLACE HIM: Frederick Sen. Ron Young (D) announced over the weekend that he will retire at the end of his term. Young endorsed Del. Karen Lewis Young (D), his wife, to succeed him in representing District 3 in the Senate, Danielle Gaines of Maryland Matters reports.

HOGAN PUSHES FORWARD FOR HIS PANEL’s MAPS: Gov. Larry Hogan formally accepted new congressional and state legislative maps from a panel on Friday that he plans to propose to the legislature. The governor also signed a proclamation for a Dec. 6 special session of the General Assembly to approve new districts for the state’s eight congressional seats. Legislative leaders, who petitioned Hogan to call the special session earlier in the day, created a separate panel months ago that is still working on its maps, Brian Witte of the AP reports.

MD GOP WOMEN ELECT YOUNGEST ELECTED OFFICER: Liliana Norkaitis is not yet old enough to vote, but she is already setting political records. Norkaitis was elected the Recording Secretary of the Maryland Federation of Republican Women at its annual convention in Ocean City on Saturday. At age 17, Norkaitis becomes the youngest elected statewide officer in the history of not just the Maryland Federation, but among all women serving as a statewide office in any member of the National Federation of Republican Women, Brian Griffiths of the Duckpin reports.

SPORTS BETTING DELAY: Despite a law allowing sports betting in Maryland, it’s still not up and running in the state. Now Gov. Larry Hogan is expressing his frustration about the gambling delays. At 22 locations across the state, betting could be taking place by now, but snags in licensing are resulting in delays, Margaret Chadbourn of WBFF-TV reports. A sports betting commission overseeing a study to ensure equitable distribution of sports betting licenses, including to minority-owned businesses, is holding it up.

WHAT WOULD B’MORE CONTROLLED PD LOOK LIKE? Baltimore officials haven’t controlled the city’s police department since 1860. But last spring, state lawmakers overwhelmingly approved legislation allowing the issue to be put to city voters as a proposed charter amendment, Emily Opilo of the Sun reports. It will be up to the city’s local control board, which met Oct. 27 for the first time, to draft recommendations for that ballot question and amendment over the next 10 months.

ACTING WICOMICO COUNTY EXEC TO SEEK FULL TERM: Acting Wicomico County Executive John D. Psota — chosen by the County Council more than a year ago to fill the term of the late Bob Culver — has decided to ask county voters to keep him in that position for another four years, Louis Peck reports for Maryland Matters.

HARFORD TO STUDY DISPARITIES IN COUNTY CONTRACTING: A forthcoming study will explore the racial and ethnic disparities in businesses with which the Harford County government contracts, County Executive Barry Glassman announced. The one yearlong study will specifically investigate whether there exists a significant disparity between qualified minority county contractors and their nonminority counterparts, Callan Tansill-Suddath of the Aegis reports.

BUCKLEY WINS; 3,700 BALLOTS LEFT FOR COUNT: Mayor Gavin Buckley, a Democrat, currently holds a 2,500-vote lead in his campaign to win a second term, Brooks DuBose of the Capital Gazette reports. He declared victory Wednesday after his Republican opponent, Steven Strawn, conceded following the first ballot canvass. Buckley led Strawn, 4,206 votes to 1,713, a 71% majority. There are still another 3,700 ballots, which were received after Oct. 28, to be counted at a final canvass on Tuesday.

KEN IGLEHART, NEWSPAPER VETERAN, DIES AT 71: Kenneth R. Iglehart, a veteran newspaperman and Baltimore Magazine’s special editions editor who had a taste for the arcane which he illuminated with a subtle sense of humor, ended his life Oct. 27 at his Mount Washington home. He was 71, writes Fred Rasmussen for the Sun. On a personal note, Roundup editor Cynthia Prairie and Ken worked the copy desk of the News American together in 1980. He was indeed a funny and talented editor.