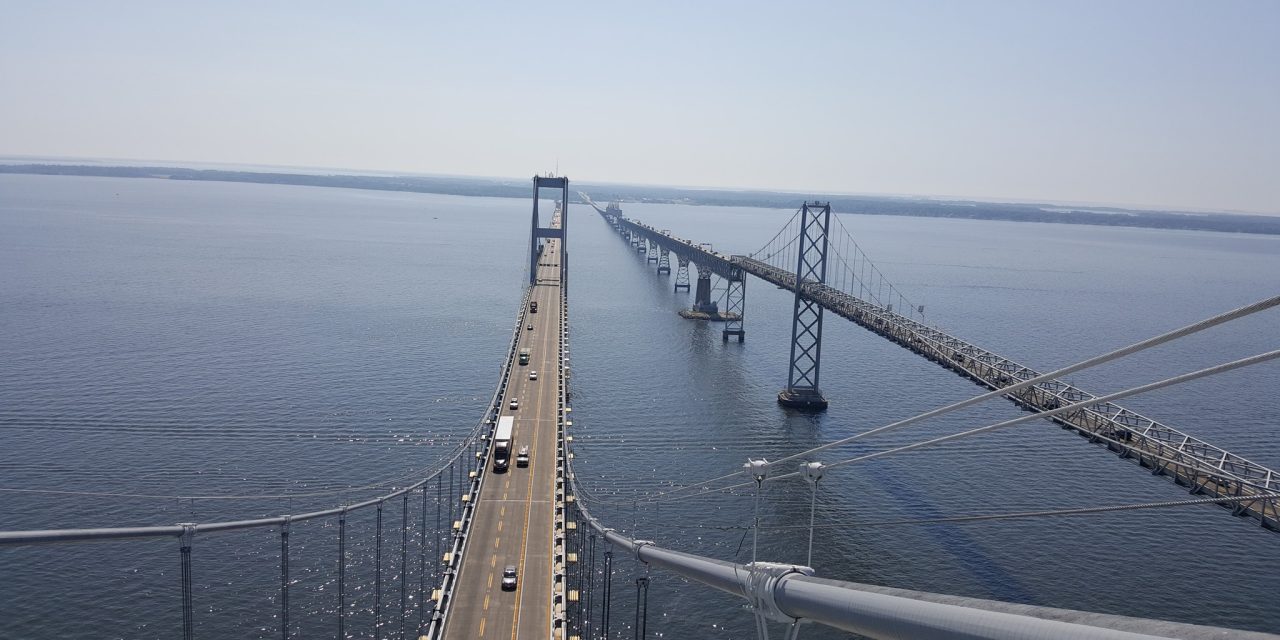 As long expected, any replacement for the aging Chesapeake Bay bridges will be built near the current spans. Maryland Transportation Authority photo

HOGAN SAYS HIS FUTURE REMAINS UP IN THE AIR: Gov. Larry Hogan said Tuesday that he is not quite sure what his plans are after the expiration of his current and final term in office in January 2023, writes Bryan Renbaum for MarylandReporter. Hogan, 65, is Maryland’s first two-term Republican governor since the 1950s. He has served as chairman of the National Governors Association and has not ruled out running for president in 2024.

HOGAN TALKS ECONOMIC RECOVERY: Gov. Hogan talked economic recovery and took shots at the legislature for their progressive economic and criminal justice policies at the seventh annual State of Business Address in Anne Arundel County on Tuesday afternoon, reports Hannah Gaskill for Maryland Matters. The event was hosted by the Maryland Free Enterprise Foundation, which promotes business-friendly legislation in Annapolis.

PUBLIC SCHOOLS TO GET HUGE CASH INFUSION: After years of complaints that public education is underfunded, Maryland schools will see an unprecedented influx of cash in the coming years, $3 billion in federal dollars and billions more in state and local money, Liz Bowie reports for the Sun. The funds are to help in learning loss over the pandemic.

PUBLIC SCHOOL QUARANTINE POLICY UNDER REVIEW: In the last month, 6,500 more Maryland public school students tested positive for COVID-19 and 31,800 more students have been quarantined, reports Elizabeth Shwe for Maryland Matters. State Superintendent Mohammed Choudhury said he is working with Dr. Jinlene Chan, the deputy secretary of public health services, to modify quarantine policy recommendations for all public schools but “we’re just not there yet.”

POLL: MARYLANDERS LIKELY TO GET BOOSTER SHOTS: As state health officials mount a push for coronavirus vaccine boosters in Maryland, a poll found that an overwhelming majority of residents in the highly vaccinated state said they are likely to get one as soon as they are eligible, Ovetta Wiggins of the Post report. The Goucher College poll found that 83% of vaccinated Marylanders said they probably will get a booster shot, while 15% said they are not likely to.

STATE SHOULD COLLECT CURRENT CANNABIS USE DATA, PANEL SAYS: In a CNS story that appears in Maryland Reporter, Allison Mollenkamp reports that experts told a state panel that Maryland should be collecting data on cannabis use before adult recreational use is legalized. Recreational cannabis is expected to be a major topic for the legislature in the 2022 session; Maryland already allows medical cannabis use.

BAINUM NAMES BANNER EDITOR: Los Angeles Times managing editor Kimi Yoshino has been named the inaugural editor in chief of The Baltimore Banner, an all-digital news outlet that is slated to launch in 2022. Stewart Bainum Jr. made the announcement Tuesday. The Baltimore Banner will be overseen by The Venetoulis Institute for Local Journalism, a nonprofit news organization in Baltimore whose launch was also announced on Tuesday. Marcus Dieterle reports in Baltimore Fishbowl.

POLL: WE’LL SIDE WITH THE NORTH, THANK YOU: From the rolling farmland of the marshy Eastern Shore to the edge of Appalachia, the Goucher Poll found that between 60% and 70% of respondents surveyed in Prince George’s and Montgomery counties, in the Baltimore metro area, and in the more rural reaches of Eastern, Western and Southern Maryland felt Maryland belonged to the North, Christine Condon of the Sun reports.

DEL. LEWIS, GLENN IVEY SEEK TO REPLACE U.S. REP. BROWN: Del. Jazz M. Lewis and former Prince George’s County State’s Attorney Glenn Ivey both jumped into the congressional race this week to replace U.S. Rep. Anthony Brown, the first in what could be a flurry of Democratic candidates making a run for the open seat, Bryn Stole of the Sun reports. Ivey, 60, served as the county’s top prosecutor from 2002 to 2011. Lewis, 32, has represented parts of Prince George’s County in the Maryland House of Delegates since 2017.

HOGAN SEEKS MORE DIVERSITY IN HIGH COURT CANDIDATES: Gov. Larry Hogan has extended the period for people to apply to an upcoming vacancy on Maryland’s highest court, citing a need for more diverse candidates after six of the initial seven applicants were men and all appeared to be white, Phil Davis of the Sun writes.

RESILIENCE AUTHORITIES CROP UP IN MARYLAND: Scott Dance of the Sun reports that Charles County is among a handful of Maryland jurisdictions trying to find a new answer to failing infrastructure that meets climate change: a resilience authority. Unique to Maryland, the quasi-government agency can seek grants, issue bonds and even levy fees to carry out projects that would otherwise compete with schools or health or safety for public funds.

BA CO COUNCIL TO SEEK TO CREATE 2nd MAJORITY BLACK DISTRICT: Almost 40 Baltimore County residents during a Tuesday evening hearing overwhelmingly opposed a redistricting plan that civil rights groups say dilutes Black votes by maintaining just one majority-Black district in a county that is almost half non-white. By the end of the hearing, Democratic council chair Julian Jones said he plans to “work hard to see if there is a way” to create at least one more majority-Black district.

FREDERICK TO RECONSIDER MASK MANDATE IF CASE RATE RISES: Frederick County’s Board of Health decided Tuesday it will reconvene to discuss a possible mask mandate should the county’s COVID-19 case rate surpass 20 per 100,000. The rate is currently at nearly 16 per 100,000, Frederick Hogan and Angela Roberts of the Frederick News-Post report.

HARFORD COUNTY DISMISSES HEALTH OFFICER: Dr. David Bishai, health officer at the Harford County Health Department who assumed the position in January at the height of the coronavirus pandemic, was terminated from the position last week, he said late Tuesday evening. Bishai, a Johns Hopkins Bloomberg School of Public Health professor with degrees in medicine and business, said he was not given a reason for his firing, Hallie Miller reports in the Aegis.