Hogan on future plans: ‘I really don’t know what I am going to do’ 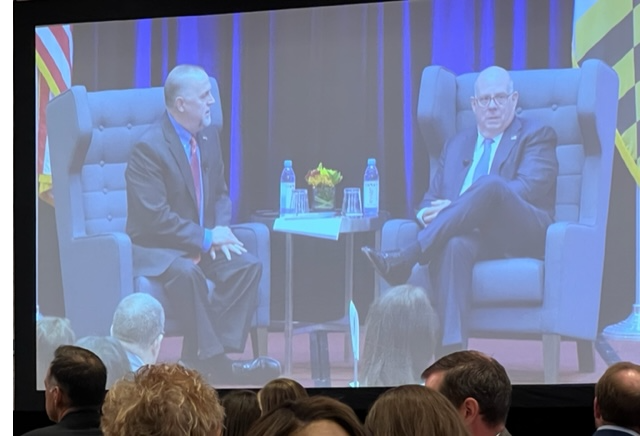 Gov. Larry Hogan said Tuesday that he is not quite sure what his plans are after the expiration of his current and final term in office in January 2023.

Hogan, 65, is Maryland’s first two-term Republican governor since the 1950s. He has served as chairman of the National Governors Association and has not ruled out running for president in 2024.

“I really am focused on this current job. People elected me to be governor. I don’t really like it when sometimes people ignore what they are supposed to be doing and look at whatever the next job is going to be. And so I am trying to stay focused. I have a day job,” Hogan said at a discussion forum at the BWI Marriott Hotel that was sponsored by the Maryland Free Enterprise Foundation.

“They are going make me do this until January of 2023. So, I don’t think I should be off doing anything else. And I think there is plenty of time to worry about the future. I really don’t know what I am going to do. That is the honest truth,” the governor added.

Hogan has said he is not interested in running for U.S. Senate next year against incumbent Democrat Chris Van Hollen who will then be up for re-election.

Van Hollen told MarylandReporter.com last week that he is not concerned about whether or not Hogan may re-evaluate that decision and ultimately decide to run against him.

“I am just focused on doing the best job I can in the United States Senate. Other people will have to make their own decisions.”

“I would like to see the governor get behind President Biden’s Build Back Better plan. It is good for Maryland. Instead, he has spent most of the time criticizing the plan.”

Hogan made infrastructure improvements his signature issue while chair of the National Governors Association. Last year he hosted an infrastructure summit in Annapolis with a bipartisan group of congressional lawmakers.

At the discussion forum on Tuesday, Hogan said he is “disgusted” with national politics and the intense partisan gridlock that permeates Washington, D.C.

Hogan said lawmakers on Capitol Hill would do well to take a page from his relationship with Maryland’s overwhelmingly Democratic legislature, where common ground is often found despite intense disagreement on key issues.

Hogan said he will focus on fighting violent crime, providing tax relief, and addressing partisan gerrymandering during the upcoming legislative session, which will be his last as governor.

Hogan urged lawmakers to get on board with the initiatives, saying there is plenty of room for which to find common ground.