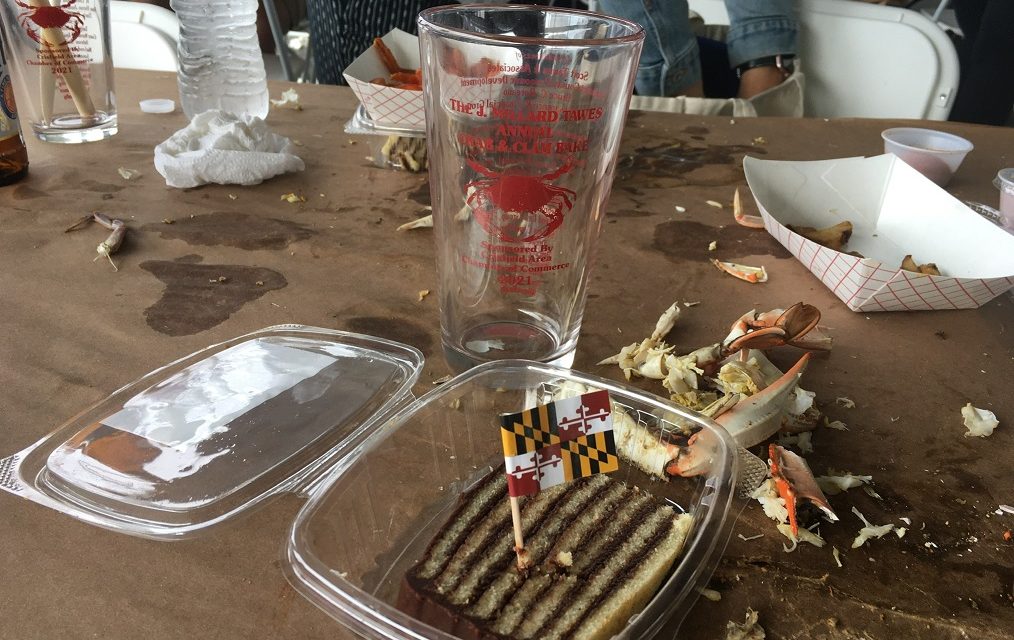 After a year’s pandemic delay, the annual Tawes crab feast in Crisfield took place Wednesday on a pleasant fall day rather than the blazing heat of July that has been the norm for decades. The politicos were there but overall attendance was down. Lobbyist Bruce Bereano, who hosts the biggest tent, said he had record turnout of 1200 people who got slices of Smith Island cake. MarylandReporter.com photo

ELRICH DEFENDS REMOVING POLICE OFFICERS FROM MO CO SCHOOLS: Montgomery County Executive Marc Elrich Wednesday defended his decision to remove police officers from public schools, saying the move does not compromise student safety and is designed to address equity concerns. This marks the first time in nearly two decades that the county’s schools do not have officers on campus.

NOAA FINDS RAINFALL IN MARYLAND INCREASED OVER 20 YEARS: Over the past 20 years, rainfall, flooding and sea level have increased across Maryland, according to data collected from the National Oceanic and Atmospheric Administration. Devon Milley and Clara Niel of the Capital Gazette reports that NOAA found that from 2000 to 2020, precipitation in Maryland increased by 2.63 inches per decade.

POT PANEL WARNED OF HEALTH RISKS: A panel of experts Wednesday advised Maryland lawmakers to carefully consider data collection and public education on potential risks of marijuana use before legalizing the drug for recreational use, Bryan Sears reports for the Daily Record.

RUTHERFORD PONDERS USING $2.5B SURPLUS: Lt. Gov. Boyd Rutherford says that some of Maryland’s $2.5 billion surplus could be returned to the citizens, while some should be saved for a rainy day, citing the COVID-19 pandemic as something that required state money to be used to help residents stay afloat. Rutherford made the remarks to WBAL-AM’s C4 and Bryan Nehman

ALT-RIGHT CATHOLIC GROUP GET GO-AHEAD FOR RALLY: A conservative group can proceed with its planned protest to be headlined by alt-right provocateurs Milo Yiannopoulos and Steve Bannon at Baltimore’s MECU Pavilion this fall, according to an injunction issued by a federal judge Tuesday, reports Emily Opilo for the Sun.

GOV HOPEFULS SPEAK ON EASTERN SHORE ECONOMY: Ahead of and during Wednesday’s J. Millard Tawes Clam Bake and Crab Feast in Crisfield, Maryland Matters spoke to each of the candidates vying to be Maryland’s next governor about their ideas for boosting the Eastern Shore economy. You can read their responses here.

MO CO PROSECUTOR TO FACE 3 CHALLENGERS: The race to unseat Montgomery County’s long-serving chief prosecutor will focus less on who will be toughest on crime and more on who has the best plan for treating nonviolent criminals and removing vestiges of systemic bias from the criminal justice system, Steve Lash reports for the Daily Record.

PITTMAN ASKS HOGAN FOR STATE OF EMERGENCY AFTER FEMA DENIES AID: Anne Arundel County Executive Steuart Pittman is calling on Gov. Larry Hogan to declare a state of emergency that would provide state assistance to businesses and residents affected by the tornado in September after the Federal Emergency Management Agency declined to help, Donovan Conaway reports in the Capital Gazette.

NUMBER OF QUARANTINED CARROLL STUDENTS DROPS: Kristen Griffith and Madison Bateman of the Carroll County Times report that the number of Carroll County Public Schools students who are in quarantine for being a close contact with a person who tested positive for COVID-19 has once again dropped significantly.

FREDERICK BUDGET SURPLUS ROUGHLY $74M: Frederick County government appears to have emerged from the last budget year with roughly $74 million in unspent funds, far more than officials had expected, Jack Hogan reports for the Frederick News-Post. The figure is an estimate based on unaudited county finances, but it’s the highest balance in recent memory and a “once-in-a-career opportunity,” Chief Administrative Officer Rick Harcum said.

OP-ED: B’MORE DISCREDITS ITSELF: In a column for Baltimore Brew, David Plymyer writes about Baltimore City’s handling of the Office of the Inspector General and its attempts to discredit the IG who has been diligently doing her job. He points to the steps and missteps the Scott administration has undertaken, including violating the Open Meetings Law.

ABERDEEN TO EXTEND WATER MAIN FOR HAVRE DE GRACE DEAL: The Aberdeen City Council approved a $1.97 million project to extend its water main just over one mile toward Havre de Grace to connect the two cities so they can buy and sell water between the two municipalities, James Whitlow of the Aegis reports.

BROADCASTER ALAN CHRISTIAN, 81, DIES: Broadcaster Alan Christian, who could be heard on AM radio stations such as WBAL 1090, WERQ 1010 and WFBR 1590, died of heart problems Oct. 5 at the University of Maryland Baltimore Washington Medical Center Rehabilitation Services in Glen Burnie. He was 81. Edward Lee of the Sun reports on his long and interesting life.