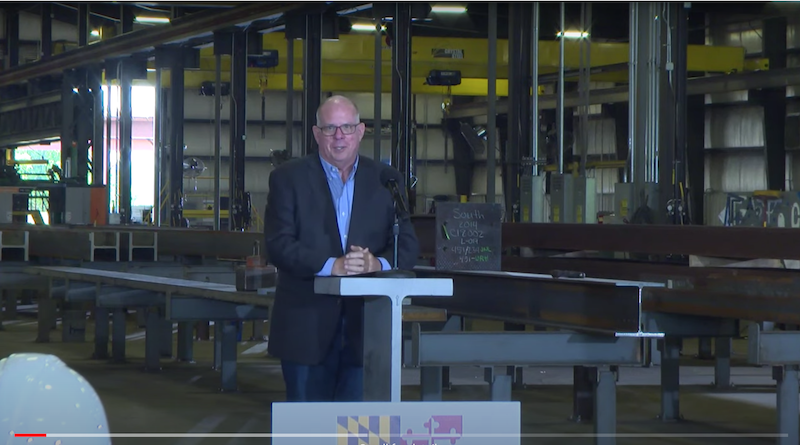 Maryland is expanding its clean energy portfolio and will have its first offshore wind steel fabrication center per a $72 million partnership between a Danish wind company and an eastern shore steel fabrication firm, Gov. Larry Hogan said Thursday.

“This latest $72 million partnership will allow Crystal Steel to increase their workforce by up to a third in order to have the capability to construct the components that are fundamental to Orsted’s turbine foundations, which will, in turn, be used to power at least 1.3 million homes with renewable energy,” Hogan said at an impromptu news conference at the Crystal Steel plant in Federalsburg.

Hogan added: “We are so pleased that this incredible family-owned minority business continues to expand its footprint right here on Maryland’s eastern shore. Offshore wind presents a once-in-a-generation opportunity for the state of Maryland to grow and diversify our economy and energy portfolio. The job creation potential and associated economic benefits for the broader supply of offshore wind development is an absolute game-changer.”

Hogan noted that the Caroline County plant will build turbine components not just for Maryland’s offshore wind development, but for that of states along the entire east coast.

“We want to do it for every state up and down the east coast and make them right here in Maryland.”

Crystal Steel Fabricators is based in Delmar, Del. and was founded in 1992 by John, Bill, and Jeff Lo. The company has plants throughout the Mid-Atlantic, the South, and in the Philippines. The 96,000 square foot Maryland plant was built in 2008 and was purchased in 2016.

Ostred is based in Federicia, Denmark, and was founded in 2006 as DONG Energy. The company adopted the name Ostred in 2017. Ostred is publicly traded and is listed on the NASDAQ exchange. It is the world’s largest developer of offshore wind power.

Liveblog of special session on redistricting