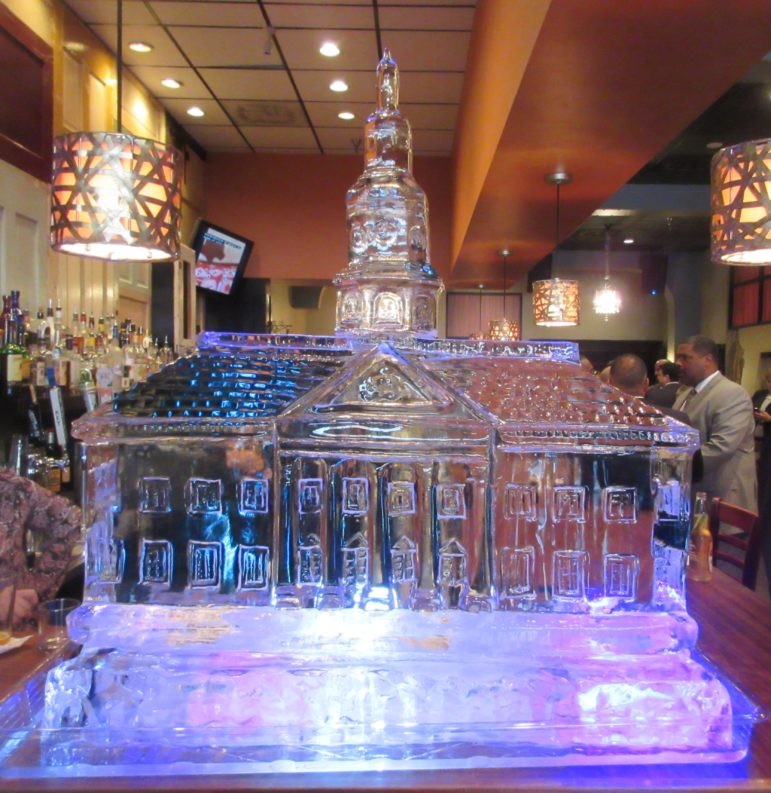 An ice sculpture of the State House in the Red Red Wine bar in Annapolis.

HOGAN ANNOUNCES ANTI-CRIME PACKAGE: Gov. Larry Hogan unveiled a sweeping package of anti-crime initiatives Thursday that deal with repeat rapists, drunk drivers, victims’ rights and sex trafficking. At a State House news conference attended by elected officials from both parties, the Republican governor pledged a bipartisan effort to enact the legislation. In past years, similar bills have failed in the General Assembly without the power of the governor’s office behind them, Michael Dresser and Ian Duncan report in the Sun  The article is topped by a 4-minute video of the governor’s announcement.

PAID SICK LEAVE: As the very first piece of legislation, Democrat lawmakers have reintroduced the Maryland Healthy Working Families Act, the paid sick leave bill, which passed the House in a party line vote last year but failed to move in the Senate. This year’s House bill, HB01, will compete with a measure recently announced by Gov. Larry Hogan. But some Republican lawmakers are not enthusiastic about Hogan’s compromise, even though it is less burdensome to businesses than the House bill, Dan Menefee writes in MarylandReporter.com.

EPA NIXES OUT-OF-STATE SMOG PROPOSAL: The Environmental Protection Agency has tentatively denied a request from Maryland and seven other states that it crack down on pollution that blows across state borders — though not because regulators don’t recognize that interstate smog is a problem, reports Scott Dance in the Sun.

RENEWABLE ENERGY & PUBLIC HEALTH: In an opinion column for MarylandReporter.com, Alfred Bartlett and Rebecca Rehr write that “as public health and medical professionals, we see the health of Marylanders is an overarching issue connecting two important pieces of unfinished business facing our state legislators in this session. One is passing a ban on hydraulic fracturing – ‘fracking.’ The second is overriding the governor’s veto of bipartisan legislation to increase our state’s target for renewable energy.”

DOUGLASS-TANEY FACE-OFF: Anne Arundel County Executive Steve Schuh, in a recent letter to the Maryland Historical Trust, says he supports a new proposal that would put a new sculpture of Frederick Douglass, a former slave, abolitionist, writer and Maryland native, face to face with the statue of 19th century Supreme Court Justice Roger Brooke Taney on State House grounds. Taney’s legacy includes his 1857 Supreme Court ruling that African-Americans had no constitutional rights. Amanda Yeager writes in the story for the Annapolis Capital.

AVERAGE AGE 65: Senate President Mike Miller showed up to the second day of his 48th consecutive year of legislative sessions using a cane, which he joked made him look “real old.” Miller, 74, has a lot of colleagues of the same vintage. On average, the leaders of Maryland’s General Assembly are 65 years old, writes Erin Cox for the Sun.

SCHAEFER AS BULLY: Senate President Mike Miller gives a bit of insight into how difficult it can be working with a governor who you don’t get along with, in this short piece by Bryan Sears of the Daily Record. “He was a bully,” Miller said of William Donald Schaefer, the late former mayor, governor and comptroller. “But it was the Senate of Maryland and it was the state of Maryland and we had to move forward. …  And that’s what we have to do (now), really, just make things work.”

AA LAWMAKERS MULL ED BOARD: Anne Arundel’s state lawmakers, divided for a decade over how best to pick the school board,  this year will debate which of at least three proposals for change is best, Amanda Yeager writes in the Annapolis Capital.

BALTIMORE CITY POLICE REFORMS: Baltimore City officials on Thursday announced an agreement with the Justice Department to revamp the city’s police department in an effort to end years of troubling practices uncovered after the death of Freddie Gray, Ann Marimow reports for the Post.

HOWARD SUPER SUES ED BOARD: The superintendent of Howard County schools is suing her own school board, alleging board members have taken a series of illegal measures aimed at undermining her authority. In a complaint filed Wednesday in Howard County Circuit Court, Superintendent Renee Foose outlined several ways in which she contends that board members have sought to “strip the superintendent of her lawful authority” since the newly elected board was sworn in last month, Erica L. Green and Fatimah Waseem report for the Sun.

CARSON SENATE HEARING: Retired Johns Hopkins neurosurgeon Ben Carson appeared poised to be confirmed as the nation’s next housing secretary after he breezed through a Senate confirmation hearing Thursday in which he largely avoided difficult questions about the department he hopes to oversee, writes John Fritze for the Sun.

MIKULSKI JOINS JHU: Former Sen. Barbara A. Mikulski no longer holds elected office. But even in retirement, she’ll keep a hand in politics. The Maryland political powerhouse, who left the Senate this month after four decades in Congress, will join the Johns Hopkins University as a professor of public policy and an adviser to the president, writes John Fritze for the Sun.