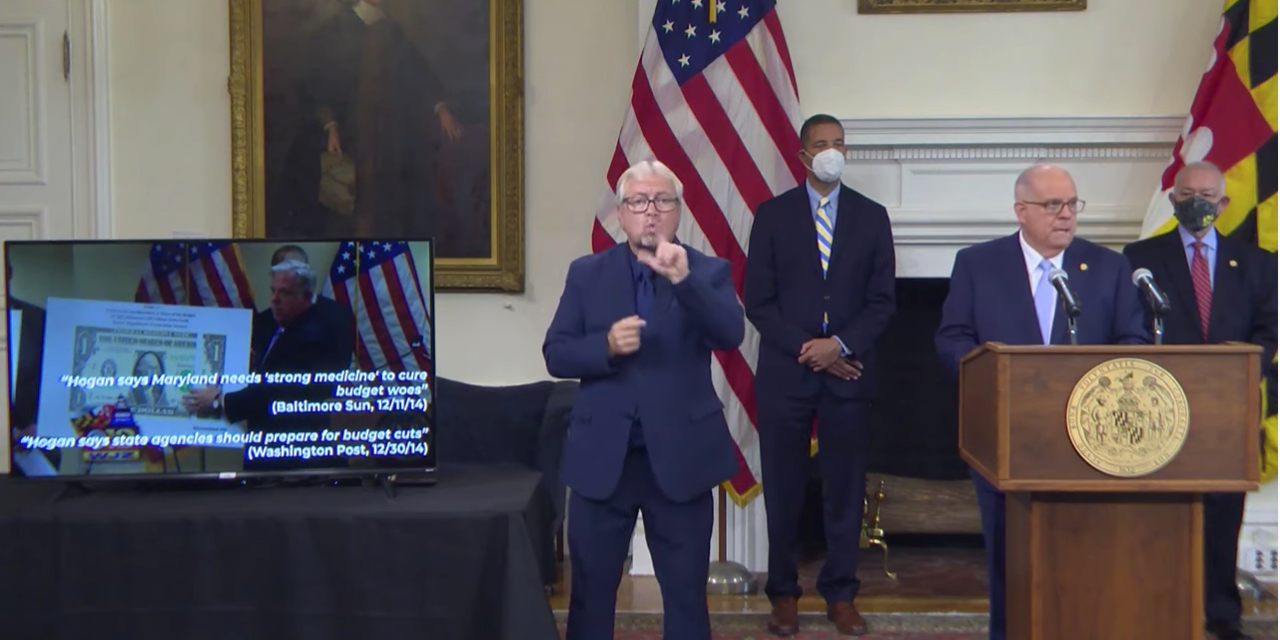 Gov. Larry Hogan Thursday outlined a five-point plan for how the state will allocate the funds derived from its $2.5 billion budget surplus.

For the first time since FY 1999, the state is projecting a long-term balanced budget and tax revenues are expected to exceed initial projections by about $1.6 billion.

Hogan attributed the surplus to fiscal discipline, most notably emergency measures his administration took during the early days of the pandemic, such as the implementation of a budget and hiring freeze.

However, much of the money in the surplus comes from the federal government via pandemic relief aid.

“Already some politicians see this as a chance to go on a big spending spree with pet projects and big payouts to special interests and new mandated increases in spending. That is not going to happen on my watch,” Hogan said at a news conference at the State House in Annapolis.

Hogan added: “We are not going to squander this hard-earned surplus on special interests. We are going to invest it in the hard-working people of Maryland.”

The plan calls for:

“With this budget framework, my message is pretty simple,” Hogan said. “As long as I am governor, I will continue to fight for fiscal discipline. I will continue working hard every single day to make it easier for Maryland families, small businesses, and retirees to stay in our state.”

Hogan said more specific details about the plan will be revealed when the administration presents its budget proposal for the upcoming year to the General Assembly.

Hogan reiterated a popular refrain from his first campaign for governor in 2014 in which many people throughout the state relayed to him that they were forced to consider leaving Maryland due to the high tax burden.

News of the surplus was first relayed by Comptroller Peter Franchot at a meeting last week.

It comes as the state’s COVID metrics are beginning to improve.

There are 540,451 confirmed cases of COVID-19 in Maryland as of Thursday morning, according to the Department of Health, and 10,320 people in Maryland have died from the virus. The state’s positivity rate is 3.89%, which is within CDC recommended guidelines for containment. Maryland has conducted nearly 13.3 million COVID-19 tests.

More than 84% of the state’s population have received at least one dose of the vaccine, according to the Department, and about 60% are fully vaccinated.

Blog: Better late than never at ICC as I-95 roars by