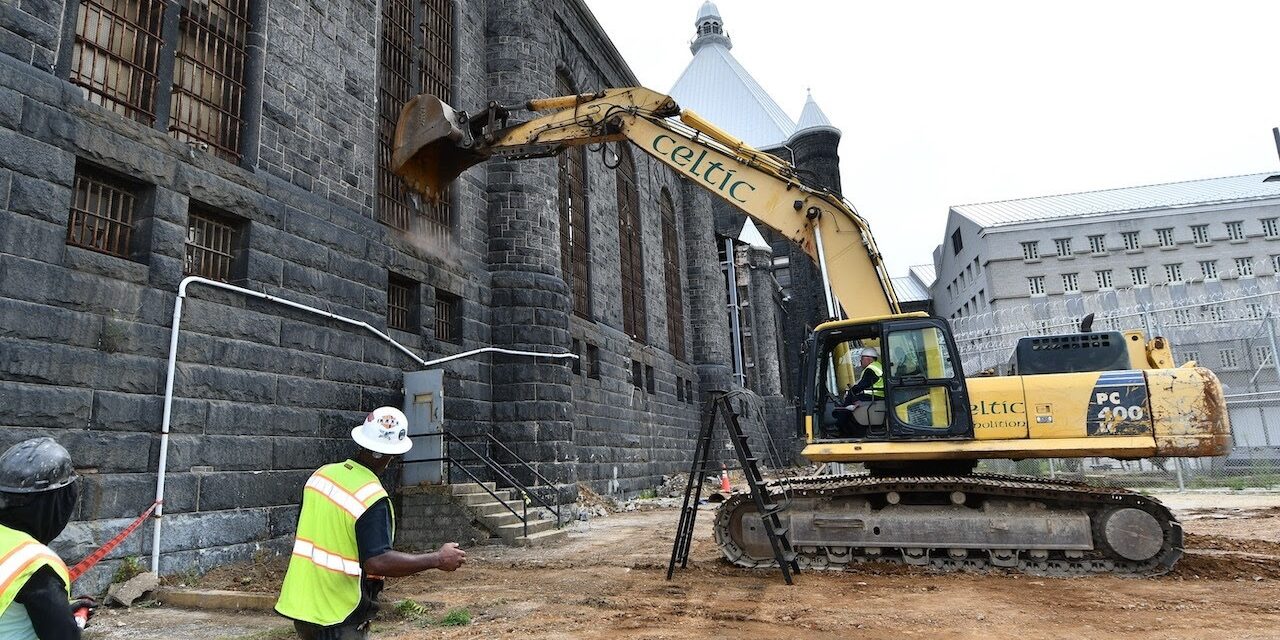 Gov. Larry Hogan, in the excavator cab, Tuesday took part in the final demolition of the Baltimore City Detention Center, which he closed in 2015. The site will be home to a new therapeutic treatment center that will provide mental health, substance abuse treatment, and reentry programming and planning for up to 1,400 individuals. Governor's Office photo

HOGAN TOUTS OFFSHORE WIND PROJECT AS GAME-CHANGER: Gov. Larry Hogan Tuesday touted news that a Maryland company plans to build a large offshore wind farm off the coast of Ocean City on federally leased land and with the use of renewable energy credits. The wind expansion project was made possible through a partnership between US Wind and the global logistics center, Tradepoint Atlantic, which is located at Sparrows Point, Bryan Renbaum reports for Maryland Reporter.

HOGAN: STATEWIDE MASK MANDATE OFF THE TABLE: Gov. Larry Hogan said Tuesday that reinstating a statewide mask mandate is not on the table. But with coronavirus infections and hospitalizations on the rise again, some schools, local governments and businesses are requiring Marylanders to mask up again — leading to a fractured set of rules and confusion about when and where masks should be worn, Hallie Miller, Pamela Wood and Meredith Cohn report for the Sun.

COVID RISE SPURS COUNTIES’ MASKING RECOMMENDATIONS: The level of coronavirus transmission in Frederick County is now considered “substantial” by the U.S. Centers for Disease Control and Prevention, crossing the threshold at which the public health agency recommends that everyone — regardless of vaccination status — resume masking in public indoor settings, Angela Roberts of the Frederick News-Post reports.

HOGAN TESTS NEGATIVE FOR COVID: Gov. Larry Hogan on Tuesday tested negative for the coronavirus after learning about a possible outbreak at a county fair that he attended last week, Ovetta Wiggins of the Post reports. Michael Ricci, a Hogan spokesman, said the governor has not been advised that he was in close contact with anyone who tested positive but decided to get tested “out of an abundance of caution.”

BOARD OF ELECTIONS SETTLES SUIT OVER BALLOTS FOR DISABLED: The Maryland State Board of Elections has settled a longstanding dispute over ballot-marking devices that disability advocates say forced them to cast a segregated ballot. The terms of the settlement were publicly announced Tuesday by the National Federation of the Blind, which filed a lawsuit over ballot privacy in August 2019, Danielle Gaines reports for Maryland Matters.

INFRASTRUCTURE BILL COULD REVIVE RED LINE: The Senate’s bipartisan infrastructure bill would include a new source of stable funding for the Washington area’s Metro system and a provision that could help revive the Red Line light-rail project in Baltimore, Michael Laris, Steve Thompson and Justin George report in the Post.

OLD CITY JAIL ALMOST COMPLETELY RAZED: Gov. Larry Hogan climbed into an excavator Tuesday, smashing a window in a fortress-like cell block in Baltimore that had housed prisoners and detainees for more than a century, Pamela Wood of the Sun reports. After nearly two years of demolition, the city jail has been reduced largely to piles of gravel. Hogan has promised to replace the old jail complex with a therapeutic detention center, where people with addiction problems who are arrested could be detained there before trial, with access to a suite of treatment options.

FORMER BA CO OFFICIALS SUES FOR OPEN RECORDS: Baltimore County is breaking state open-records laws by withholding numerous documents that should be released to the public, Fred Homan, a former high-ranking veteran of county government alleges in a new lawsuit. Homan claims that the county is refusing to turn over thousands of emails and charging unreasonable fees for public records relating to a county firefighter’s retirement benefits, Alison Knezevich and Taylor DeVille report in the Sun.

OPINION: GIVE DEAFLYMPIANS THEIR DUE RESPECT: In a commentary for Maryland Reporter, Deaflympian Howard Gorrell opines about the Deaflympian swim champion Becca Meyers of Timonium and how Deaflympians are not afforded the same respect at paralympians. “The U.S. Congress should add the Deaflympics to the USOPC (U.S. Olympic and Paralympic Committee) program. We believe that the parity with the USOPC could motivate future athletes who are deaf, deaf-blind, and hard of hearing,” he writes.

OPINION: CLOWN TO THE RIGHT OF ME: Dan Cox, Republican candidate for governor, has been on social media recently spreading questionable interpretations of Maryland’s election data, Brian Griffiths of the Duckpin reports. As part of his support of Donald Trump’s bogus claims about the 2020 presidential election, Cox is purporting that there was serious election fraud in Maryland. No evidence has actually been provided that any fraud happened, but that hasn’t stopped Cox from spreading these ridiculous and clownish claims.

1st WOMAN JUDGE OF CARROLL ORPHANS’ COURT DIES: Gail R. Cross, who was a political and community activist and later became the first female judge to serve as a member of the Carroll County Orphans’ Court, died of coronary disease July 12 at her Salisbury home. The former Westminster resident was 78, Fred Rasmussen reports for the Sun.