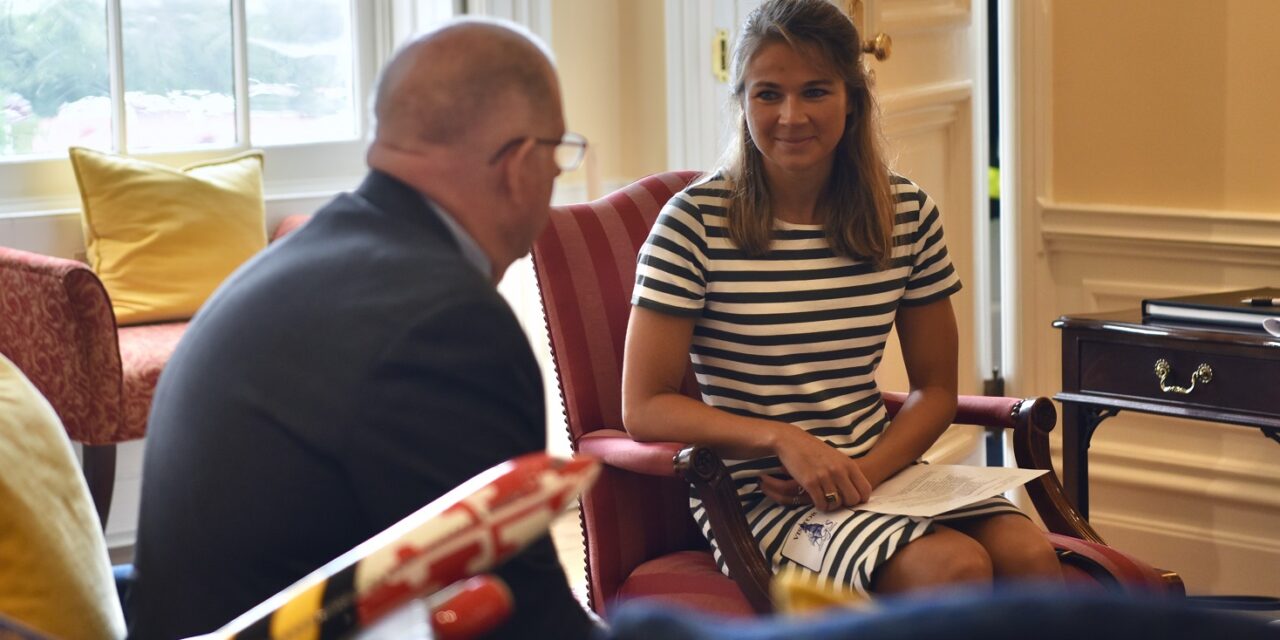 Gov. Larry Hogan met with deaf-blind swimmer Becca Meyers in his State House office July 26, presenting her with a citation on the anniversary of the Americans with Disabilities Act. Governor's Office photo

Instead, a six-time Paralympic medalist received a Governor’s Citation from Maryland Gov. Larry Hogan on July 26. After reading her USA Today opinion piece, Hogan recognized her “bravery for highlighting the issue of inequality and access for people with disabilities.”

I have my own Becca Meyers story.  In September 2009, a USA Deaf Sports Federation (USADSF) official learned that I would have a long stayover at the Los Angeles International Airport after the 2009 Deaflympics in Taiwan. He asked me if I could watch a 14-year-old swimmer at the airport until her parents would arrive with a plane later.  I gladly accepted his request.

At the airport, the official handed Rebecca “Becca” Meyers into my care. For the next few hours, the very shy, quiet athlete and I walked around and had a little chat. She told me that she had won her first-ever international medal – a bronze medal in the 4x200m freestyle relay. 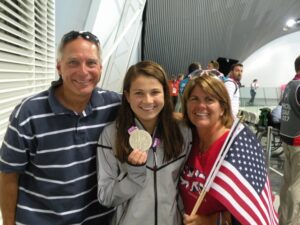 Becca with her parents, Mark and Maria, at the 2011 World Deaf Swimming Championships in Portugal. Photo from the USA Deaf Sports Federation

Her parents — Maria and Mark Meyers – soon arrived and thanked me for watching her.  It was my last time to see Becca in person.

As a 1969 and 1973 Deaflympian, I am angered by the media’s failure to mention that Becca is also the Deaflympian.

Did the USADSF 2011 Female Sportsperson of the Year participate in the Deaflympics in 2013 in Sofia, Bulgaria, and 2017 in Samsun, Turkey?

Unfortunately, Becca turned down the USADSF invitations to participate in both games.

That came as no surprise to me and most die-hard Deaflympians. The USADSF had not received the development fund from the United States Olympic Committee (USOC) since 2003 when the USOC had complied with the Olympic and Amateur Sports Act Amendments of 1998.  That amendment included athletes from the Paralympic Games and amateur athletes with disabilities within the act’s scope.  It also established the Paralympics Division within the U.S. Olympic Committee.

On April 1979, at the USOC annual House of Delegates meeting, Sen. Ted Stevens of Alaska, sponsor of the Amateur Sports Act of 1978, said to 2,000 delegates:

Immediately, USOC President Robert Kane tapped me as an at-large member of the USOC Handicapped in Sports Committee.

Forty-two years later today, the U.S. Congress should add the Deaflympics to the USOPC program. We believe that the parity with the USOPC could motivate future athletes who are deaf, deaf-blind, and hard of hearing.

And Becca will likely return to the Deaflympics with the support of the USOPC — the 24th edition of the Summer Deaflympics will be held in Caxias do Sul, Brazil, on May 1-15, 2022.

When receiving a medal from Paralympics and/or Deaflympics from now, Becca would thank Maryland Del. Mary Ann Lisanti, D-Harford, for including Paralympics and Deaflympics in a state law that would exempt from the state and local income tax the value of specified medals and prize money or honoraria received by an individual who competes in the related Olympic events, Chapter 501 of the Acts of 2017. Maryland is the only state in the USA that applies the exemption to all four games; Olympics, Paralympics, Deaflympics, and Special Olympics.

In her Tweet after she made the decision to skip Tokyo, Becca wrote, “I’m speaking up for future generations of Paralympic athletes in hope that they never have to experience the pain I’ve been through. Enough is enough.”  Her exclamation made me proud.

Howard Gorrell attended 12 of the last 13 Deaflympics since 1969 and is a 2004 recipient of the Jerald M. Jordan Award, given to those who exhibit leadership and continuous participation toward the goals of the Deaflympics.