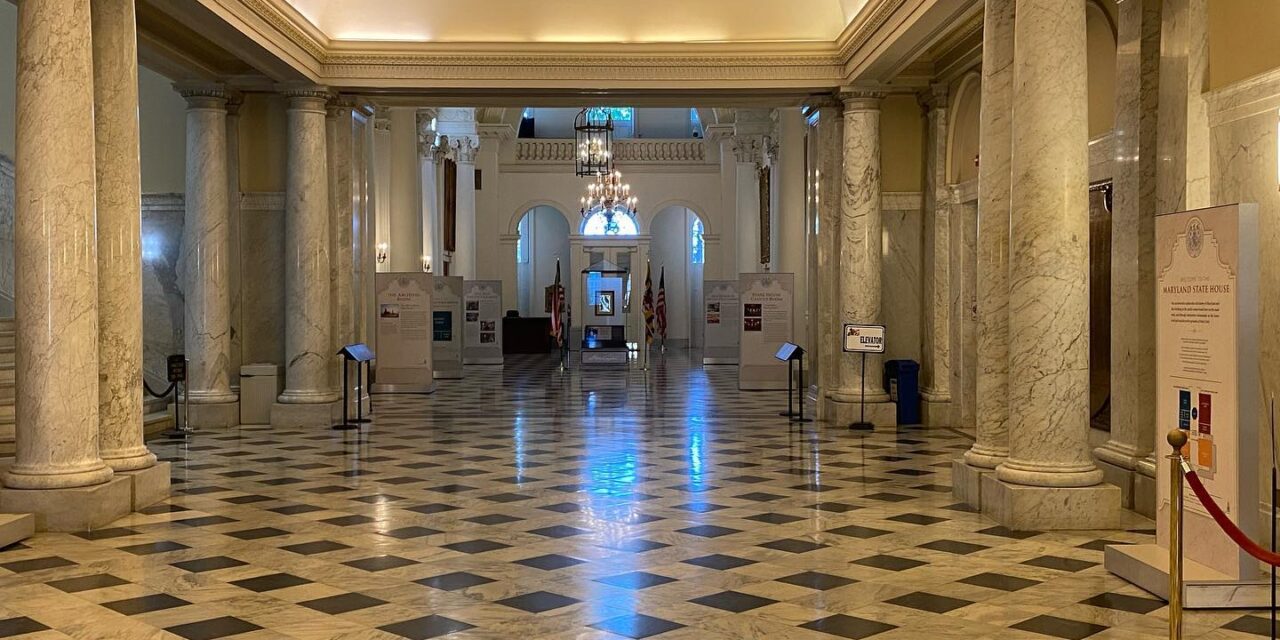 The State House lobby has been closed to visitors during the pandemic but reopens Friday. Governor's Office photo

RASKIN SPARS WITH EMERGENT CHIEF IN CONTENTIOUS HEARING: U.S. Rep. Jamie Raskin (D-Md.) sparred with the president and CEO of the Gaithersburg-based biotech company Emergent BioSolutions at a congressional hearing on Wednesday over decisions the company made both before and after it was forced to destroy millions of COVID-19 vaccines manufactured at its Baltimore facility due to issues related to cross-contamination, Bryan Renbaum reports for Maryland Reporter.

MARYLAND, D.C., VA WRESTLE WITH EXCESS REVENUE: Government leaders in Richmond, Annapolis and the District are wrestling with a side effect of the coronavirus pandemic that they did not anticipate: excess revenue. Virginia expects a budget surplus of at least $500 million at the end of this fiscal year, and Maryland and D.C. are looking at smaller but significant bumps in finances, Gregory S. Schneider, Ovetta Wiggins and Michael Brice-Saddler of the Post report.

MTA CHIEF TAKES NEW JOB IN VANCOUVER: The head of the Maryland Transit Administration is leaving the agency next month for the top job at the regional transit authority in Vancouver, British Columbia, Colin Campbell of the Sun reports. Kevin B. Quinn Jr., who oversaw the 2017 BaltimoreLink bus system overhaul, the troubled Purple Line light rail project in the D.C. suburbs and the debut of the MTA’s CharmPass mobile ticketing app, will lead TransLink, formally known as the South Coast British Columbia Transportation Authority.

STATE HOUSE TO REOPEN TO PUBLIC: Maryland’s historic State House will open Friday to the public for the first time in more than a year, after closing to visitors last year due to the coronavirus pandemic, Pamela Wood of the Sun reports. The State House, built between 1772 and 1779, is the oldest state capital building in continuous legislative use in the nation.

SIMONAIRE REVERSES PLAN ON LOBBYIST TICKETS: Senate Minority Leader Bryan W. Simonaire (R-Anne Arundel) has reversed course on a fundraiser in which he was charging lobbyists $1,000 a ticket to attend. That was the same ticket price he was asking political action committees to pay; local business owners and Anne Arundel County residents were being asked to pay $500 per ticket, while sponsorships for the event ran from $1,500 to $6,000. Josh Kurtz writes the story for Maryland Matters.

HARRIS VOTES AGAINST JAN. 6 COMMISSION: The U.S. House voted Wednesday 252-175 to give the go-ahead to the formation of an independent, bipartisan commission that would investigate the Jan. 6 attack on the U.S. Capitol, despite objections from Republican leaders that the scope of the commission was not wide enough and that other investigations are ongoing. Maryland’s sole Republican member of Congress, Rep. Andy Harris, voted against the measure, Jane Norman writes in Maryland Matters.

PRINCE GEORGE’S PUSHES TO GET YOUNGSTERS VAXXED: Prince George’s County is putting on a big push to get residents 12 to 15 years old vaccinated against the Covid-19 virus, William Ford reports for the Washington Informer. County Executive Angela Alsobrooks brought her 15-year-old daughter, Alex, to receive a vaccine Friday.

ARUNDEL COUNCIL HOPES TO EXTEND OUTDOOR DINING: The race is on to save outdoor dining set up as a lifeline for Anne Arundel County restaurants. The County Council will vote on whether to introduce competing emergency bills today in a special session, both are aimed at extending the popular dining option before the emergency powers County Executive Steuart Pittman used to approve them expire, Chase Cook reports in the Capital Gazette.

B’MORE BACKS KEEPING OUTDOOR DINING: Residents who have enjoyed dining in Baltimore City streets will get to keep doing so, Mayor Brandon Scott announced Wednesday. The city has extended programs that allow restaurants to request permission from the city to place seating in public rights-of-way like parking lanes and sidewalks, Emily Sullivan of WYPR-FM reports.

B’MORE TO SELL ENDANGERED MANSION TO CHARITY GROUP: Baltimore’s spending board approved Wednesday the sale of the historic Upton Mansion to a charity group affiliated with The Afro newspaper, which will revitalize the structure for its new headquarters, Hallie Miller of the Sun reports. In 2009, Maryland Magazine and Preservation Maryland deemed the structure among the most endangered buildings in the state.

THE HIDDEN FREE-BLACK COMMUNITY OF SAN DOMINGO: Jonathan Pitts of the Sun writes, “It has been said that San Domingo, a census-designated place between Mardela Springs and Sharptown near the Delaware line, isn’t on the main road to anywhere, and a two-hour drive from Baltimore bears out the idea. … You may spot a lone sign — Welcome to San Domingo: A Community of Free Black Pioneers — that locals put up in recent years. From there, a byway curves to its central gathering place.”