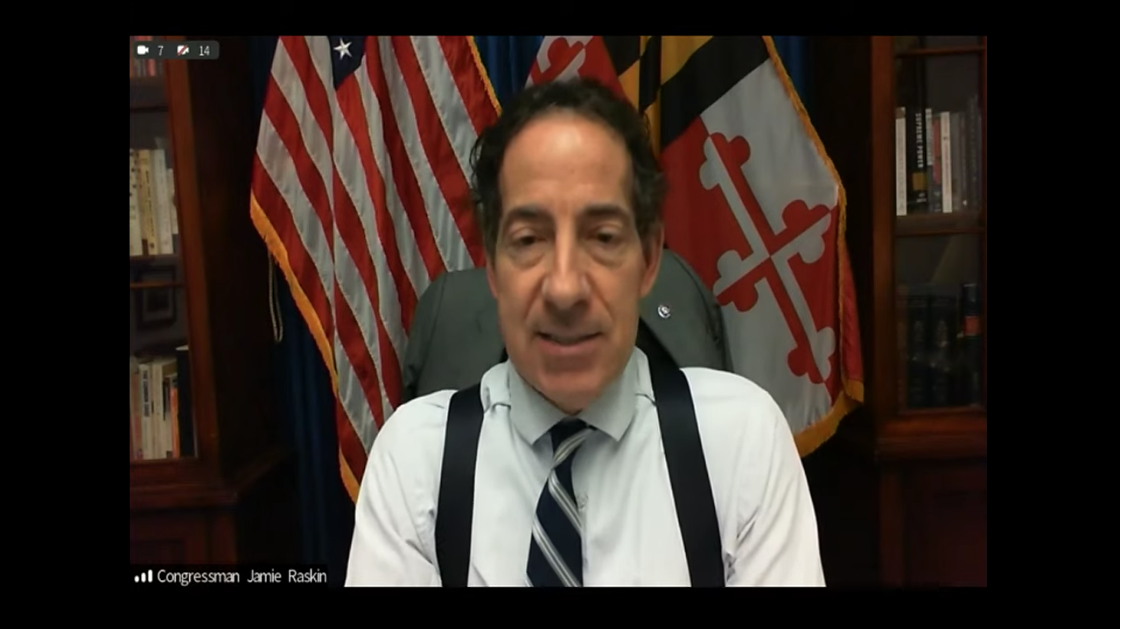 U.S. Rep. Jamie Raskin (D-Md.) sparred with the president and CEO of the Gaithersburg-based biotech company Emergent BioSolutions at a congressional hearing on Wednesday over decisions the company made both before and after it was forced to destroy millions of COVID-19 vaccines manufactured at its Baltimore facility due to issues related to cross-contamination.

Robert G. Kramer has led Emergent since April 2019. He has been with the company since 1999 and has served in various positions such as chief financial officer and chief operating officer.

Kramer and Emergent’s chairman of the board of directors Fuad El-Hibri gave virtual testimony to the House Select Subcommittee on the Coronavirus Crisis. They faced tough questions from Democrats about the destroyed vaccines, potential conflicts of interest, corporate bonuses, and the timing of stock sales.

Republicans largely blasted the Biden’s administration’s plan to ease vaccine patent protections and reiterated their call for hearings to investigate the origins of the coronavirus pandemic.

“On six different occasions, there were inspections and audits in the spring and the summer of 2020 that ended with warnings to Emergent that you needed to take urgent action to improve conditions at the facility to retrain the staff in order to prevent cross-contamination, and yet still there was cross-contamination in millions of vaccines and millions of vaccines ended up being destroyed. Is that right?” Raskin asked.

Kramer responded by saying Emergent is taking “corrective actions” to ensure that the cross-contamination episode is not repeated.

“We were aware with a number of audits. And we treat all of that audit information seriously. We always respond with corrective actions to those audits and take all possible precautions from it happening again.”

Raskin inquired as to how the cross-contamination between the Johnson & Johnson and AstraZeneca vaccines happened in the first place.

Kramer said that the precise answer to that question is unclear.

“We don’t know exactly how the virus of the AstraZeneca product was transferred into the media but somehow it was.”

Raskin asked how the cross-contamination was first discovered.

Kramer said it was brought to light during the manufacturing process in a quality control test conducted by J&J. Kramer insisted that none of the contaminated samples ever made it to the market.

With regard to corporate compensation, Raskin asked Kramer to explain the rationale for paying the company’s Executive Vice President of Manufacturing and Technical Operations, Sean M. Kirk, what amounted to more than $1 million with bonuses during the same year in which the vaccine “debacle” took place.

Kramer defended the arguably lavish compensation as a reward for hard work.

“Throughout 2020 Mr. Kirk played an integral role in interfacing with our corporate clients as well as with BARDA (Biomedical Advanced Research and Development Authority)  and HHS Operation Warp Speed. Sean Kirk was literally working around the clock, 24-hours a day for months on end in order to supervise and direct all of the work that was being done.”

But Raskin was not convinced.

“Wouldn’t you agree that this was a catastrophic failure in the process? And how can that be rewarded? What would it take for someone not to get a bonus?”

Still, Kramer did not back down.

“I don’t agree that it was a failure. Mr. Kirk’s work was extraordinary. The amount of work that was accomplished and the progress that was made to advance these two candidates into manufacturing development and get them in a state of readiness to be prepared to respond to the pandemic was incredible.”

The corporate compensation packages were brought to light by documents that were released by the committee on Wednesday morning prior to the hearing. Emergent received more than $220 million last year from American taxpayers.