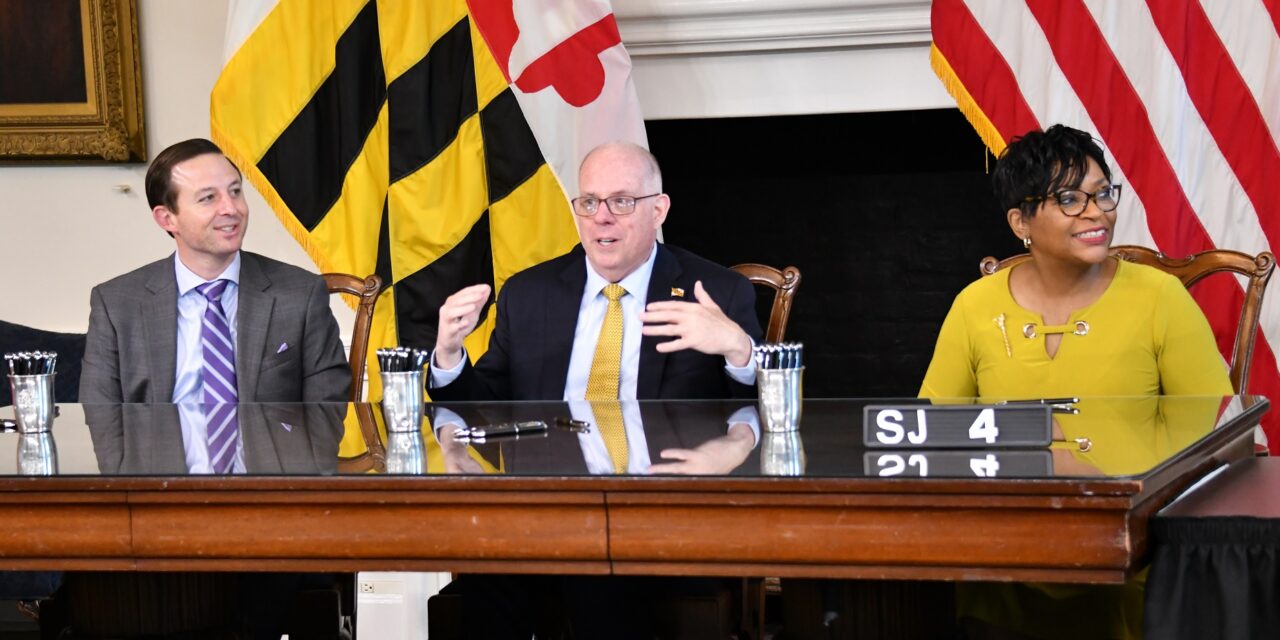 For the first time in a year, the bill signing at the State House was maskless and smiling. From left, Senate President Bill Ferguson, Gov. Larry Hogan and House Speaker Adrienne Jones. Governor's Office photo

PG COUNCIL REGISTERS OPPOSITION TO MAGLEV: The Prince George’s County Council approved a resolution Tuesday to oppose a proposed high-speed maglev train project slated to run through parts of the county between D.C. and Baltimore, William Ford reports for the Washington Informer.

2nd ANNAPOLIS FIREFIGHTER SEEKS DELEGATE SEAT: Another Annapolis firefighter is running for one of two Maryland delegate seats representing Annapolis in 2022. Brooks DuBose of the Capital Gazette reports that Lt. Doug Rathell, a 15-year veteran of the Annapolis Fire Department, is running as a Republican in District 30A. Rathell’s colleague, Battalion Chief John Ortlieb, announced his candidacy last week

TROUBLED VAXX MAKER, FOUNDER GAVE $2M IN POLITICAL DONATIONS: When Fuad El-Hibri, founder and executive chairman of Emergent BioSolutions, appears today before a House subcommittee to explain how the company’s Baltimore plant ruined millions of doses of coronavirus vaccine, he will be questioned by lawmakers he and his employees spent tens of thousands of dollars helping to elect, Sheryl Gay Stolberg, Chris Hamby and Rebecca R. Ruiz report in the New York Times.

FOWLER’s REPUTATION FALTERS WITH ONE TESTIMONY: With one day of testimony at the Derek Chauvon trial, the reputation of Dr. David Fowler, Maryland’s former medical examiner, was in tatters, write Tim Prudente and Phillip Jackson of the Sun. Dr. Joshua Sharfstein, the former Maryland health secretary and city health commissioner, watched with confusion. “It’s hard for me to square the Dr. Fowler who I worked with on child mortality issues with what I saw during the trial,” Sharfstein said.

MO CO BILLS WOULD STRENGTHEN POLICE ACCOUNTABILITY: Montgomery County lawmakers on Tuesday introduced three bills to strengthen police accountability and expand training for officers, the latest step in an ambitious effort to overhaul policing in the suburb of 1 million people, Rebecca Tan reports for the Post.

SHAKEUP IN B’MORE POLICE LEADERSHIP: The Baltimore Police Department announced a major shakeup of its top ranks, including new leadership for the homicide section, internal affairs, the training academy and patrol operations as part of a re-organization following the departure of a top deputy commissioner, Justin Fenton reports in the Sun.

B’MORE PUSHES FOR OVERSIGHT OF ELECTED OFFICIALS’ TRIPS: The Scott administration has issued revised rules that would require Baltimore State’s Attorney Marilyn Mosby and other elected officials to secure approval for future out-of-town travel regardless of who pays for their trips, Mark Reutter of Baltimore Brew reports.

CARROLL BOARD OKS $1M IN SCHOOL STAFF BONUSES: With one dissenting vote, Carroll County’s Board of Commissioners approved granting the Board of Education an additional $1 million to fund bonuses for school staff not receiving step increases on the condition the school system matches the funds, Madison Bateman reports for the Carroll County Times.

BA CO COUNCIL WANTS DETAILS ON RESCUE FUND SPENDING: Baltimore County Executive Johnny Olszewski’s administration is working on a blueprint on how to spend the $161 million it’s expecting to get from the American Rescue Plan. But at Tuesday’s county council meeting the chairman pushed for details before the council signs off on that spending, John Lee reports for WYPR-FM.

FILLED STADIUMS MAY BE FAR DOWN THE ROAD: Despite the flurry of activity to ease outdoor masking and distancing restrictions due to Covid-19 — coming with baseball season in full swing — experts say it could be a long time before Maryland’s teams play in stadiums filled with maskless, cheering fans, Bruce DePuyt of Maryland Matters reports.