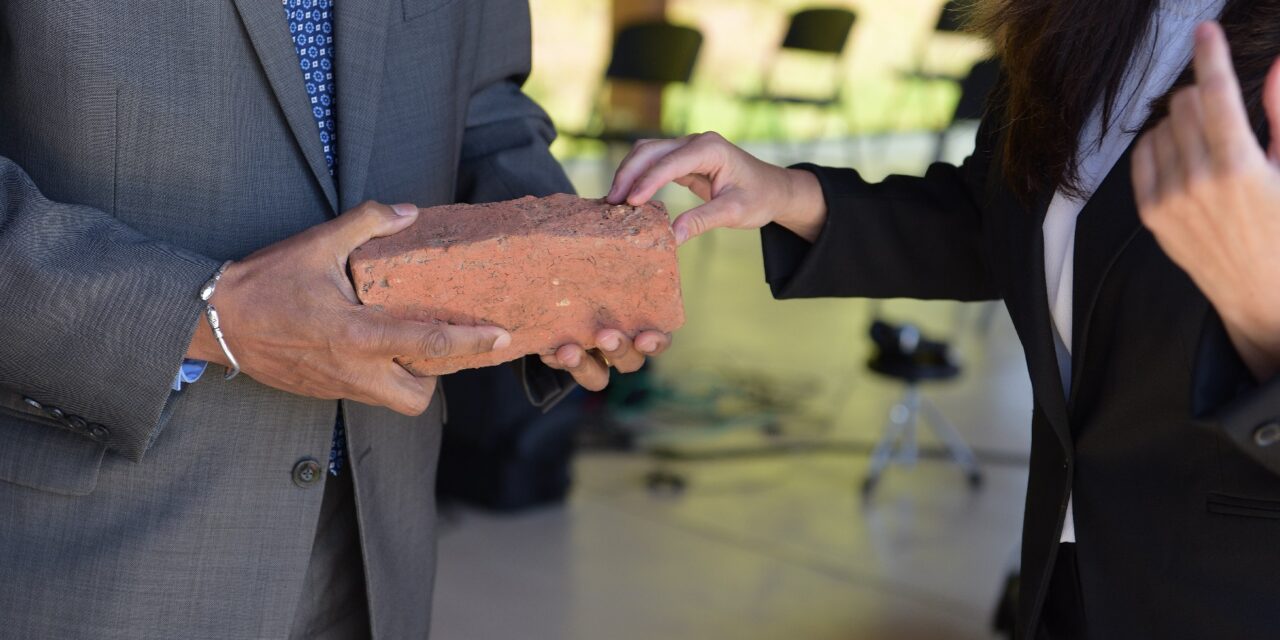 This brick found by archaeologists may have held up the home of Ben Ross, the father of Harriet Tubman where she lived as a youth in Dorchester County. Governor's Office photo

LOCALS REACT TO CHAUVIN GUILTY VERDICT: Officials and residents lauded the conviction, while saying much more needs to be done, Justin Fenton, Tim Prudente and John-John Williams report in the Sun. Baltimore Mayor Brandon Scott said he hoped Floyd’s family found healing in the verdict, but said regardless “more work remains to prove once and for all that Black lives matter in America.”

HOMESITE OF TUBMAN’s FATHER FOUND: On Tuesday morning, Maryland and federal officials announced that archaeologist Julie Schablitsky, guided in part by an 1808 coin, believes she has found the site where Harriet Tubman lived with her parents and several siblings during her formative teenage years in Dorchester County before she escaped enslavement, Michael Ruane of the Post reports.

LABOR LAMENTS LOSS OF PRIORITY IN ANNAPOLIS SESSION: In a year in which the health and safety of essential workers was among the most prominent labor rights issues, activists say that Maryland lawmakers failed to pass protections for people working during the current and future public health emergencies, Johanna Alonso reports for the Daily Record.

VOTING RIGHTS ADVOCATES CELEBRATE MARYLAND PACKAGE: While states across the nation are passing laws to restrict voting rights for Americans, members of the Expand the Ballot coalition joined the Larry Young Morning Show on WOLB 1010AM to celebrate the end of the Maryland General Assembly session and the passage of a comprehensive voting rights package that makes Maryland one of the leading states in America as it relates to voting reform, The Afro is reporting.

PITTMAN: PUT BAY BRIDGE EXPANSION ON HOLD: With the Maryland Transportation Authority — which owns and operates the state’s toll facilities — in the midst of a series of public hearings on building a third span to the Bay Bridge, Anne Arundel County Executive Steuart Pittman (D) said the Hogan administration hasn’t done enough to justify the enormous expense a third span would bring, and wants the project put on hold, Bruce DePuyt reports in Maryland Matters.

WHO’s WHO AND WHERE IN EARLY RACE FOR GOV: With Maryland’s General Assembly session wrapped up, more potential candidates are coming out with news about their plans to run in 2022 for an open seat for governor. Sun staff writes up who’s in, who’s out and who’s exploring the possibilities.

EMERGENT FACES LAWSUIT, INVESTIGATION: The Maryland company that recently had to pause COVID-19 vaccine production over quality issues in its Baltimore plant now also faces a shareholder lawsuit and a congressional investigation for its behavior during the pandemic, Meredith Cohn of the Sun reports.

MUSK REMOVED HI-SPEED DC-B’MORE PLAN FROM WEBSITE: Elon Musk’s tunnel-digging business no longer lists a proposed high-speed D.C.-to-Baltimore transit system on its website, and a Federal Highway Administration spokesman said the company has given the agency no indication it intends to move ahead with the project, Ian Duncan reports in the Post.

WA CO COMMISSIONERS OK SMALLER CUT IN INCOME TAX RATE: The Washington County Board of Commissioners reached a compromise Tuesday, approving a smaller cut in the income-tax rate with an eye on county government being more efficient and lowering the tax rate further in the future. The five-member board voted unanimously to adopt a resolution cutting the 3.2% income-tax rate to 3%, effective Jan. 1, Julie Greene reports for the Hagerstown Herald-Mail.

STATE HIRES ADVISOR TO HELP PG RESIDENTS GETS VAXXED: The Maryland Department of Health has hired an adviser to support efforts in vaccinating vulnerable and underserved communities in Prince George’s County, a health department spokesman confirmed by email on Tuesday, Brenda Wintrode reports for Maryland Matters.

BIDEN ACTION COULD AID CRAB INDUSTRY: President Biden’s administration announced an increase Tuesday in the number of temporary seasonal workers who will be allowed to work in the U.S. this year, a move likely to boost Maryland’s crab industry, the AP is reporting.