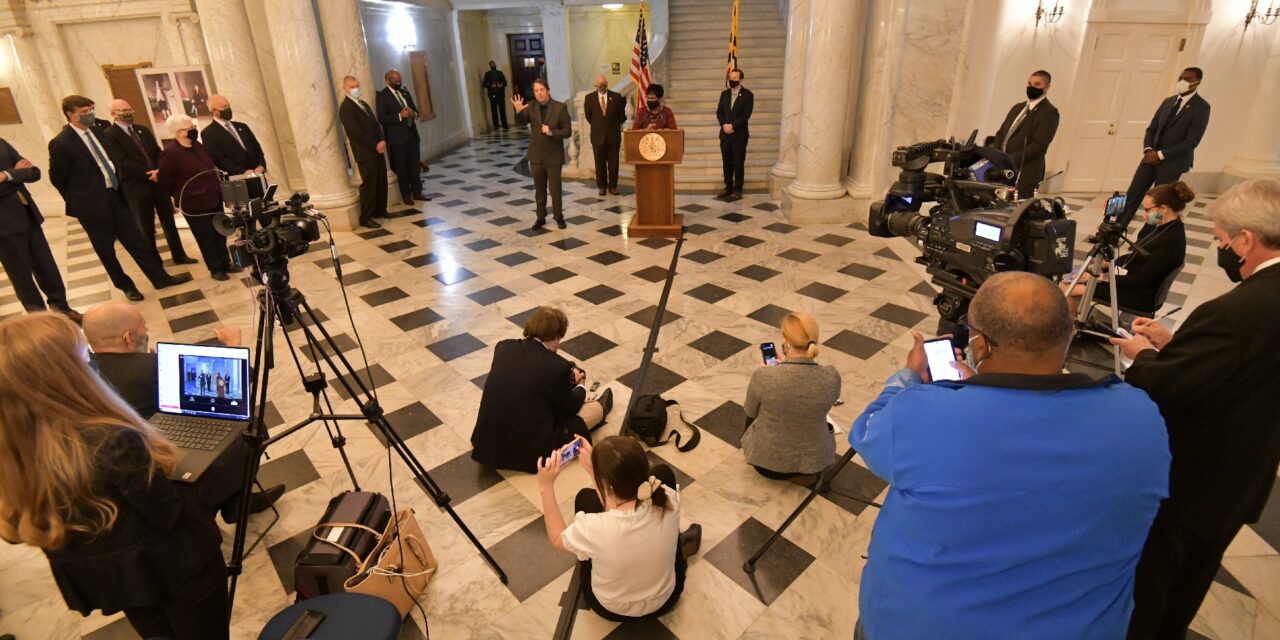 HOGAN TOUTS $3.9M IN COVID RELIEF; USE OF FUNDS OUTLINED: Gov. Larry Hogan said Wednesday that a bipartisan agreement has been reached on how to allocate the $3.9 billion in federal coronavirus relief funds that Maryland is poised to receive from the recent passage of the American Rescue Plan Act, reports Bryan Renbaum of Maryland Reporter.

SENATORS WEIGH POLICE REFORM CHANGES: Sizable gaps remain between a bill backed by House Speaker Adrienne Jones — the Police Reform and Accountability Act of 2021 — and a package of nine policing bills that cleared the Senate by wide margins in February. None of those bills have received a vote in the House of Delegates, Bryn Stole and Pamela Wood of the Sun report.

BILL OK’d TO COMPENSATE THOSE WRONGLY IMPRISONED: Maryland lawmakers have approved legislation to change how the state compensates people who have been wrongly imprisoned for crimes they didn’t commit, the AP is reporting. The House of Delegates gave the measure final approval Tuesday, sending the bill to Gov. Larry Hogan.

SENATE OKs MORE EARLY VOTING CENTERS: The Maryland Senate gave final approval to a bill expanding the number of early voting centers across the state Wednesday after a final round of heated partisan debate and failed Republican amendments, Bennett Leckrone reports in Maryland Matters. House Bill 745 would increase the number of early voting centers required in Maryland’s counties based on the number of registered voters in each jurisdiction. The legislation passed the Senate in a 33-14 vote.

MISSTEPS MARKED VAXX ROLLOUT; STATE NOW IN MIDDLE: Hallie Miller and Alex Mann report in the Sun that after mingling early on among the states that rolled out their vaccines least efficiently, Maryland now finds itself in the middle. As of Wednesday, Maryland ranked 24th of 50 states and Washington, D.C., for the percentage of adults who have been completely immunized, according to U.S. Centers for Disease Control and Prevention data.

METRO VAXX CLINIC TO OPEN: A COVID-19 vaccination clinic that is set to open next week will be a particular benefit to residents of the Washington, D.C., region who prefer or need to use mass transit, officials said on Wednesday, Bruce DePuyt reports for Maryland Matters. The clinic, located at the Greenbelt Metro station, will open on April 7, the White House and Hogan administration announced. It will have the capability to administer 3,000 shots per day, officials said.

ERROR STOPS B’MORE EMERGENT PLANT FROM DISTRIBUTING VAXX: The Emergent BioSolutions manufacturing plant in East Baltimore that has been making coronavirus vaccine for months has not yet received emergency use authorization from the federal government, a spokesperson confirmed Wednesday, and the delay is reportedly due to a potentially egregious human error, Hallie Miller and McKenna Oxenden of the Sun report.

CECIL WOMAN PROTESTS SHERIFF DEPUTIES’ ACTIONS: Rebecca Tan of the Post writes a long piece about Christine Givens, who has been leading a protest against police brutality at the Cecil County Sheriff’s Department following a video in which deputies “tell the motorist he looked suspicious but refuse to say why.” As far as those in the crowd knew, no one in this overwhelmingly White, conservative part of Maryland — a place once notorious as a Ku Klux Klan stronghold — had ever cussed out the sheriff on the steps of his headquarters before.

MO CO OPENS VAXX REGISTRY TO 16+: As residents flooded into a new COVID-19 vaccination site at Montgomery College in Germantown on Wednesday, the county has opened up preregistration for all residents age 16 and older, Briana Adhikusuma and Caitlynn Peetz report for Bethesda Beat.

BETHESDA MAG, BEAT SOLD TO LOCALS: Steve and Susan Hull on Wednesday announced the sale of Bethesda Magazine and Bethesda Beat to Scott and Jillian Copeland of Rockville. “Scott and Jillian are committed to continuing to tell the stories that matter to our community and to expanding the reach” of the two publications, Steve Hull wrote.