FELON-VOTING VETO OVERRIDDEN: More than 40,000 recently released Maryland felons will regain the right to vote in time for this year’s election. The legislature on Tuesday narrowly overturned Gov. Larry Hogan’s veto of a bill to extend voting rights to felons before they complete probation and parole, Erin Cox writes for the Sun. 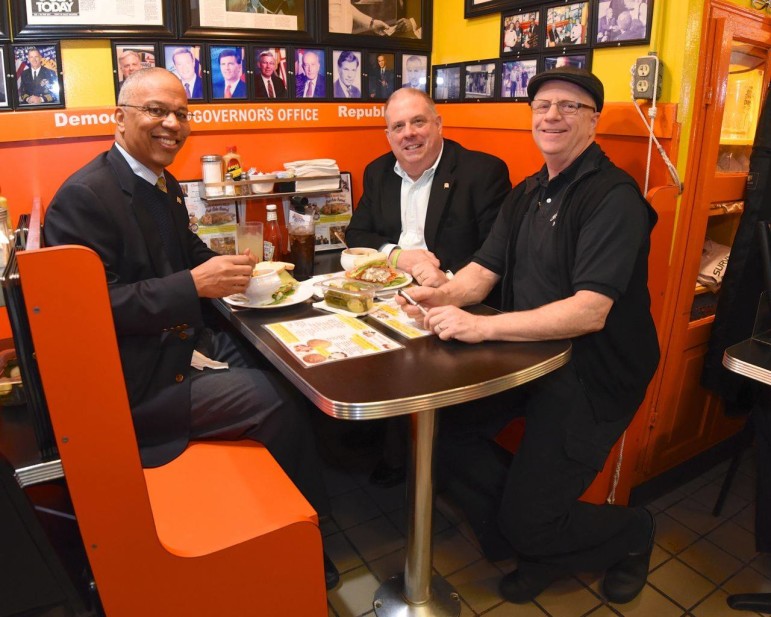 At Chick and Ruth’s Delly in Annapolis with owner Ted Levitt (in hat), Lt. Gov. Boyd Rutherford and Gov. Larry Hogan shared the governor’s Bipartisan Crab soup (Maryland crab and cream of crab), about the only bipartisan thing cooking in Annapolis Tuesday. The soup is better than it sounds. Governor’s Office Photo.

2-STATE GERRYMANDER SOLUTION: Could Virginia be the answer to Maryland’s convoluted congressional district map? A Montgomery County lawmaker thinks so. Sen. Jamie Raskin, a Democrat, has introduced legislation that would seek to enlist the Old Dominion in what he calls the Potomac Fair Representation Compact to eliminate congressional gerrymandering in both states, writes Michael Dresser for the Sun.

MANAGING BLIGHTED PROPERTIES: Elisha Sauers and Chase Cook of the Annapolis Capital report that Annapolis officials are hoping the passage of state legislation will make it easier for them to monitor and punish owners of vacant or blighted buildings throughout the city. SB 248 would allow municipalities across the state to create registries and a remediation fund from a special tax rate for vacant and blighted buildings. The fund would be used to repair the property.

PENSION TAX EXEMPTION PROPOSED: Believing senior citizens are fleeing Maryland due to high taxes on retirement income, Del. Karen Young, D-Frederick, is proposing to exempt as much as $75,000 on pension income,  Bryan Renbaum reports for MarylandReporter.com.

SCHOOL CONSTRUCTION COSTS: A review by the Maryland’s Department of Legislative Services finds that public school construction costs in Maryland are increasing at a faster rate than construction inflation across all sectors and regions, writes Robin Clark Eilenberg for Conduit Street.

SCHOOL BOARD VETTING PROCESS: Some Anne Arundel lawmakers are floating the idea of stripping the governor’s appointments from the panel that nominates local school board members, reports Elisha Sauers for the Annapolis Capital. The delegation’s education subcommittee met Tuesday afternoon to discuss possible changes to a bill put forward by County Executive Steve Schuh.

CARDIN TALKS COLLEGE AFFORDABILITY: Thirteen Howard Community College students had the chance to talk college affordability with Sen. Ben Cardin last week at the Columbia campus, writes Lisa Philip for the Howard County Times. Students discussed their struggles to pay for and complete their degrees while juggling obligations such as parenthood and work. They also asked about financing options for diverse segments of the population like adult learners and veterans.

INFLATED ENROLLMENT AT CITY SCHOOLS? Marc Steiner of WEAA-FM hosts a panel to discuss the idea that the Baltimore City School district might have inflated student enrollment numbers, a revelation that could result in the loss of millions of dollars. Luke Broadwater of the Sun, Frank Patinella of the Education Reform Project, Roni Ellington of Morgan State University and Del. Kathy Szeliga discuss the issue.

HOGAN RAISED $1.7M: Fenit Nirappil of the Post reports that Gov. Larry Hogan raised $1.7 million in his first year in office, a significant haul for a first-time officeholder who used public funds to get elected and was outspent during his 2014 campaign. The funds come on top of the $1.4 million Hogan (R) collected in the two months after his election, leaving him with $2 million in his campaign coffers after paying off loans and other expenses.

TRONE DISSED ON OBAMA REFERENCE: Democratic congressional candidate Kathleen Matthews called Tuesday on a competitor to pull down a web advertisement that features President Barack Obama, arguing that the video is “intentionally misleading,” John Fritze of the Sun reports.

TURNOVER IN CITY HALL: Nearly half the members of the Baltimore City Council are not seeking reelection this year. Three of the 15 are retiring, two are vacating their seats to run for mayor, and another is pursuing a judgeship. Luke Broadwater of the Sun and WYPR news analyst Fraser Smith join WYPR’s Sheilah Kast to discuss the implications. And Councilmembers Brandon Scott, Bill Henry and Robert Curran share their thoughts on the changes ahead. What does a City Council turnover mean for the city of Baltimore? Will new candidates and this year’s renewed sense of activism draw voters to the polls?

CITY MAYOR CANDIDATE SPENDS BIG: David Zurawik of the Sun reports that businessman David Warnock has spent almost $600,000 for TV ads in the Baltimore City mayoral race. And that is just on network-owned or -affiliated stations, like WJZ and WBAL, that are governed by the Federal Communications Commission, which requires public filing on such sales. Warnock ads can also be seen as local inserts on cable channels like CNN, which are not under FCC reporting rules for political ads.