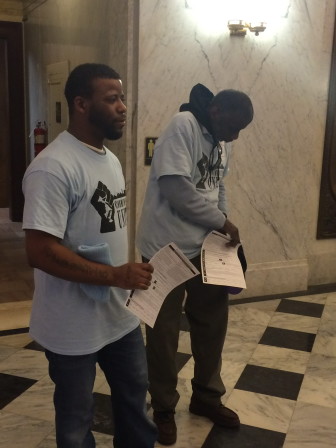 Convicted felon and Communities United member Marcus Toles, left, clutches a voter registration form after the Maryland Senate passed an override of a veto that would provide voting rights to felons on probation or parole, on February 9, 2016. Capital News Service photo by Leo Traub

Moments after the Maryland Senate voted Tuesday to override Gov. Larry Hogan’s veto of a felon voting rights bill, which enables those on probation and parole to vote, Marcus Toles was holding his future: A voter registration form.

“It feels fantastic to have our rights restored after we’ve done our time and have a voice,” said Marcus Toles, an ex-felon and member of Communities United, an advocacy group for low-income individuals. “I’m gonna fill this out right now.”

After a 29-18 vote in the Senate, the bill passed and expanded the voting rights of nearly 40,000 ex-felons in the state, according to supporters of the bill.

But there was a little drama before it passed, as one Democrat — Sen. J.J. Peters, D-Prince George’s — missed the first vote on the House’s version of the bill, leaving the final tally 28-18, one vote short of the number necessary to override.

Once all 47 Senators were present, the Senate voted 29-18 to approve a revote on the House bill, which was ultimately passed by the same margin.

Hogan has been an outspoken critic of the bill, asserting that those on probation or parole have not completed their full sentence, and should not be able to cast ballots in an election until they have done so.

“Today, 29 people in the Maryland Senate decided to ignore reason and common sense and support an action that the vast majority of Marylanders vehemently oppose,” said Doug Mayer, a spokesman for the governor. “For too long, voters have been completely ignored by their elected representatives in Annapolis – it happened again today and our citizens deserve better.”

(Bryan Sears of the Daily Record has a video of Gov. Hogan’s comments over lunch. “I think there are several people who won’t survive this vote” in the next election.)

The vote is the sixth such override of Hogan’s vetoes from 2015, his first legislative year. Other overrides included the decriminalization of marijuana and an Internet hotel tax.

Before the vote, Senate Minority Leader J.B. Jennings, Baltimore County, reminded members of the Senate that, during U.S. government class, he learned there was only one way to lose your right to vote: committing a crime and going to jail.

“I think it’s wrong, and I think probation is still part of the penalty,” Jennings said.

Voting twice on the same bill

The controversy spanned beyond the actual issue, however, as some questioned whether a Maryland legislator can vote twice on the same bill. A delegate until last week, when he was appointed to fill a vacancy, Sen. Craig Zucker, D-Montgomery — the override’s 29th and arguably deciding vote — had already voted in favor of it as a member of the House.

Sens. Jennings and Stephen Hershey Jr., R-Upper Shore, citing that controversy, asked for an indefinite postponement for the override vote. It failed, 19-27.

After a heated but respectful debate, Sen. Catherine Pugh, D-Baltimore, struck a conciliatory tone as the Senate adjourned for the day.

“I’m glad to see we are moving this issue forward,” Pugh said, “but again I think it is worth it to say ‘thank you for the healthy debate.’”