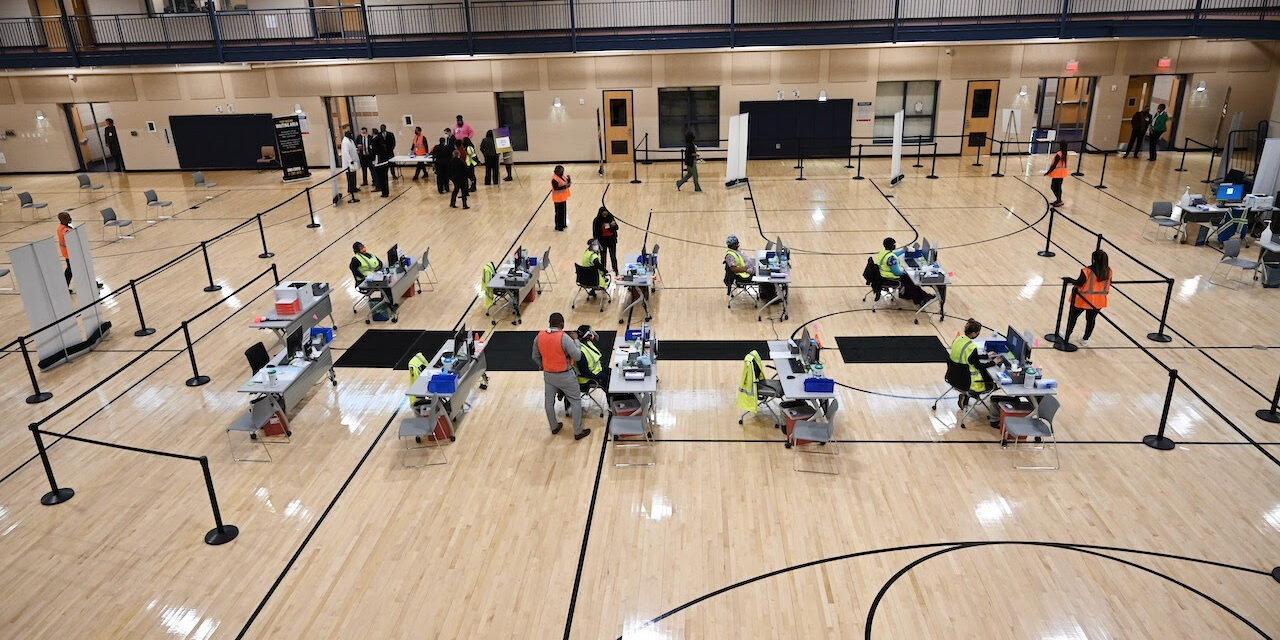 CARTER BILL WOULD PREVENT FELONY MURDER CONVICTION OF MINORS: Sen. Jill Carter (D-Baltimore City) Tuesday emphasized her support for legislation that would prohibit minors from being convicted of first-degree murder and allow those who committed that crime as a minor to petition to have that finding reviewed by a court, reports Bryan Renbaum for Maryland Reporter.

HOGAN TO EXPAND VAXX ELIGIBILITY: Gov. Larry Hogan said Tuesday that he’ll announce “shortly” the next steps of expanding eligibility for the coronavirus vaccine in Maryland, as the state expects supplies to increase. During a visit to a vaccine clinic in Prince George’s County, the Republican governor said White House officials just told governors to expect a boost in vaccine doses starting March 29, Pamela Wood and Donovan Conaway of the Sun reports.

JUST 1.7% OF MARYLANDERS MISS 2nd VAXX DOSE: Fewer Maryland residents are skipping their second COVID-19 vaccine shot than in just about any other state in the nation, according to a U.S. Centers for Disease Control and Prevention report released on Tuesday. Bruce DePuyt of Maryland Matters writes that the report found that just 1.7% of people failed to return for a second dose of their Pfizer-BioNTech or Moderna vaccine.

COVID POSITIVITY RATE, HOSPITALIZED NUMBERS CLIMB: Two of Maryland’s key coronavirus indicators — its positivity rate and the number of people hospitalized – continued to climb slightly Tuesday as the state closed in on administering 1.95 million COVID-19 vaccine doses, Alex Mann reports for the Sun as he outlines where the state stands on current cases.

HOGAN CALLS MO CO MASS VAXX SITE ANNOUNCEMENT ‘PREMATURE:’ After months of pushing state health officials to place a COVID-19 mass vaccination site in Montgomery County, local officials said Tuesday that they received approval for a site at the Germantown campus of Montgomery College. But Gov. Larry Hogan called the news that a site will be placed at the campus “premature,” Briana Adhikusuma of Bethesda Beat reports.

SENATE DITCHES SENIOR CITIZEN DRIVING BILL: A bill that would require drivers 85 years and older to renew their driver’s licenses in person was rejected by the Maryland Senate Tuesday, Bryan Sears reports for the Daily Record. The unusual result of a preliminary vote came after an intense debate about senior citizens drivers that caused some who voted for the bill in committee to change their minds on the floor.

CIVIL JUSTICE DATABASE CREATED: If you didn’t know that Dorchester, Washington and Baltimore counties have some of the state’s highest eviction rates, or that over half of St. Mary’s County households spend more than 35% of their income on rent, you’re not alone. But a new database created by the Maryland Access to Justice Commission has collected this data and built a digital tool that will allow legislators, elected officials, advocates, news media, community leaders and the general public to gain a better understanding of civil justice in Maryland, including identifying problems within the system.

POSTAL DELAYS CONTINUE: The holiday season and its corresponding deluge of mail have passed, but the U.S. Postal Service continues to be hampered by delays, so much so that one Towson resident received his mail-in ballot four months late. Staffing shortages due to the coronavirus pandemic and winter storms have challenged postal workers. The postmaster general remains in the crosshairs over postal service cuts that lawmakers argue are continuing to slow important deliveries, Christine Condon of the Sun reports.

BIAS INCIDENTS IN ARUNDEL DROP: Anne Arundel County released a new, more detailed picture of hate bias incidents over the last two years showing a 27% decrease in reports between 2019 and 2020, Olivia Sanchez of the Capital Gazette reports. County Executive Steuart Pittman acknowledged activists’ work across the county in 2020 but was quick to caution against false optimism. The drop in reports may have been influenced by the COVID-19 pandemic.

ELRICH TO REMOVE POLICE FROM MO CO SCHOOLS: Montgomery County Executive Marc Elrich on Monday said he plans to remove police from public high schools in the fall — instead, officers will be assigned to patrol communities and respond to incidents at schools when needed, Briana Adhikusuma and Caitlyn Peetz report for Bethesda Beat.

BAINUM-ALDEN CAPITAL NEWSPAPER TUG OF WAR: Sarah Ellison and Elahe Izadi of the Post report on the Alden Global Capital-Stewat Bainum tug of war over the Baltimore Sun and its other newspapers – and possibly the entire Tribune stable.

NPR FOLLOWS STORIES OF CAPITAL GAZETTE: NPR has been following the Capital Gazette shootings since Day 1, June 28, 2018, when a gunman stormed the building and killed five staff. Now, it is following the 2nd crisis to hit the paper – the possible purchase by Alden Global Capital and now Stewart Bainum’s attempts to wrest it and other Sunpaper newspapers from Alden’s hands. Jon Allsop writes the story for Columbia Journalism Review.

HOW THE CONGRESSIONAL RACES ARE SHAPING UP: Brian Griffiths of the Duckpin writes that congressional races around Maryland are getting a little interesting, with candidates starting to pop up. A lot of who eventually runs and what their chances are won’t become clear until the new congressional districts are in place. He kicks off with District 1, Andy Harris’ seat.

ARUNDEL FLAGS FLY AT HALF-STAFF TO HONOR PASCAL: Anne Arundel County flags will fly at half-staff in honor of former County Executive Bob Pascal, who died Friday at 86. Pascal lead the county from 1974 to 1982, after serving in the state Senate for one term. He later served as Appointments Secretary under Gov. William Donald Schaefer from 1989 through 1995, Olivia Sanchez of the Capital Gazette reports.