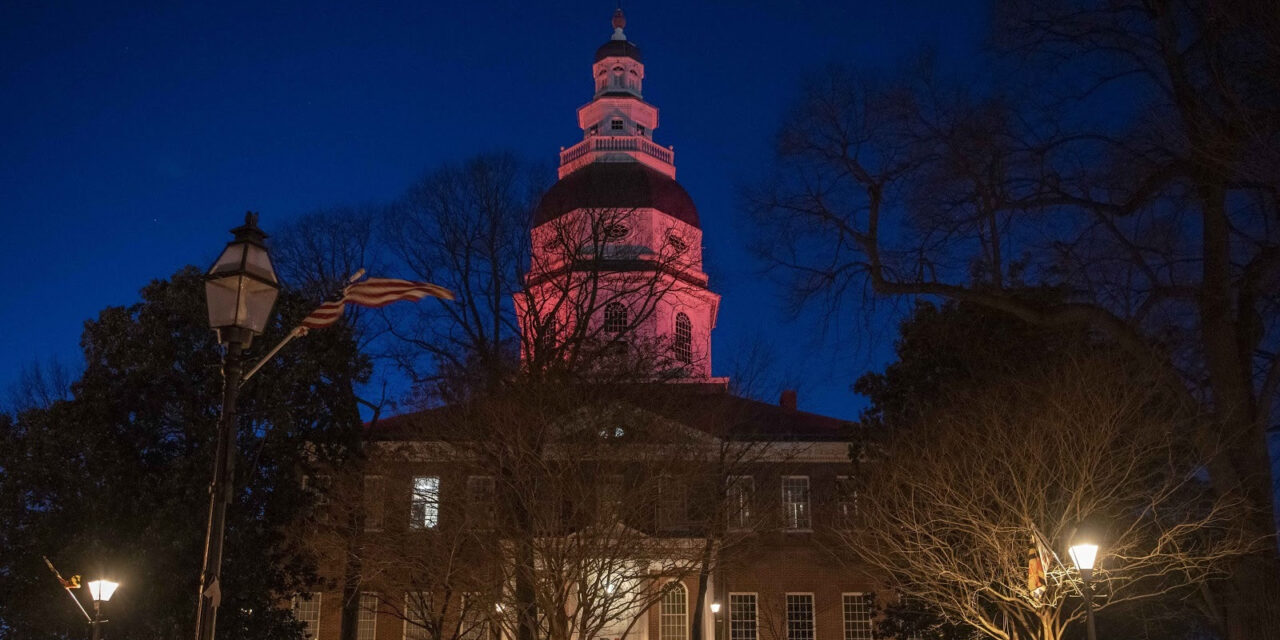 To commemorate Marylanders who died of COVID-19 on Friday, March 5,, the State House dome was illuminated in amber. Governor's Office photo

DISPARITIES IN COUNTY PER CAPITA VAXX ALLOCATION: COVID-19 vaccine allocation policy from the Maryland Department of Health saw the state send a disproportionately small supply of vaccines to more populated counties when adjusted per capita, according to data from the first 11 weeks of vaccinations, Alex Mann reports for the Sun.

HOGAN PROPOSES $1K BONUSES FOR STATE WORKERS: Gov. Larry Hogan proposed Monday giving $1,000 bonuses to all state government employees. The bonuses would cost the state $74.1 million, which the governor said the state has on hand due to budgetary belt-tightening done early in the pandemic, Pamela Wood reports for the Sun.

VAXX HUNTERS OUTLINE RACIAL PROFILING INCIDENTS: A group of volunteers that helps others find COVID-19 vaccine appointments said on Monday it has documented several cases in which people of color have been required to show identification at Maryland pharmacies before they were able to get a shot. The incidents of alleged profiling took place at retail pharmacies under contract to the federal government, they said.

POLL: REPUBLICANS MORE LIKELY THAN BLACKS TO REFUSE VAXX: Republicans in Maryland are more likely than Black residents to refuse a vaccine, according to a new Goucher College Poll released Monday, reports Bryan Sears for the Daily Record.

BILL ON MORE OPEN INTERNET CAR PRICING DIES: Buyers searching to purchase a car on the internet hope to find the lowest price but often auto manufacturers are forcing dealers to post a minimum advertised price that is actually higher than what they might be willing to sell the car for, reports Len Lazarick for Maryland Reporter. A bill to allow dealers to post the lowest sale price without being punished by the manufacturer, sailed through the Maryland Senate two years in a row with little or no opposition. But the House Economic Matters Committee killed the House version of the measure Monday in a close 11-12 vote

ENVIRO BILLS MAKE WAY THROUGH LEGISLATURE: Christine Condon of the Sun reports on 10 of the most significant environmental bills working their way through Maryland’s legislature this session. The first one, SB414/HB583, is considered by many Maryland environmental groups to be a key priority in the session. It would require a greater reduction of greenhouse gas emissions from the state than current law.

WHERE KEY BILLS STAND: Pamela Wood and Bryn Stole of the Sun are tracking key bills as the Maryland General Assembly continues its 90-day session. Among them are repeal of the Law Enforcement Officers Bill of Rights and legalizing sports gambling.

POLL: GOP OPPOSITION TO RECREATIONAL POT COOLS: A growing number of Marylanders support the legalization of recreational marijuana, according to a new poll released by Goucher College. Bryan Sears of the Daily Record reports that the latest numbers, which feature growing support from Republicans, come as Virginia is on the verge of legalizing recreational marijuana.

COAL BILL WITHDRAWN AS GROUPS WORK TOGETHER: The Maryland Coal Community Transition Act of 2021 was withdrawn during a committee voting session on Monday, so that environmentalists and labor unions can continue to work together during the legislative interim on what a just transition from coal would look like, Elisabeth Shwe of Maryland Matters reports.

QUIET IN STATE HOUSE: State Del. Dereck E. Davis (D-Prince George’s) has served in the House of Delegates for 27 years. In years past, he frequently became annoyed when he slipped out of a committee room to answer nature’s call and found himself waylaid by lobbyists or advocates on his way to the men’s room. Now, he’s feeling nostalgic about those encounters, Josh Kurtz and Danielle Gaines of Maryland Matters write about the extreme change in Annapolis.

BIDEN CANCELS VISIT TO B’MORE EMERGENT PLANT: The White House has canceled President Joe Biden’s planned visit Wednesday to Emergent BioSolutions’ plant in East Baltimore. Instead, the president will host an event at the White House that day with the CEOs of two of the drug companies—Johnson & Johnson and Merck — who had been scheduled to participate in the Baltimore event. The release does not specify why Emergent BioSolutions is no longer included.

FED RELIEF PACKAGE COULD BE NEEDED BOOST FOR METRO, OTHERS: The latest coronavirus aid package moving through Congress could be the final funding bridge that Metro and other transit agencies need to begin ramping up for riders they hope will return after being vaccinated, transportation officials say, Justin George reports for the Post.

J. MICHAEL WILLIAMS, AIDED HUGHES GUBERNATORIAL CAMPAIGN, DIES AT 81: J. Michael McWilliams, a Baltimore mediation attorney who founded his own firm, participated in the 1978 gubernatorial campaign of Harry R. Hughes and then headed his transition team, died of complications from pneumonia Feb. 23 at Sinai Hospital, Fred Rasmussen of the Sun reports. The Roland Park resident was 81.