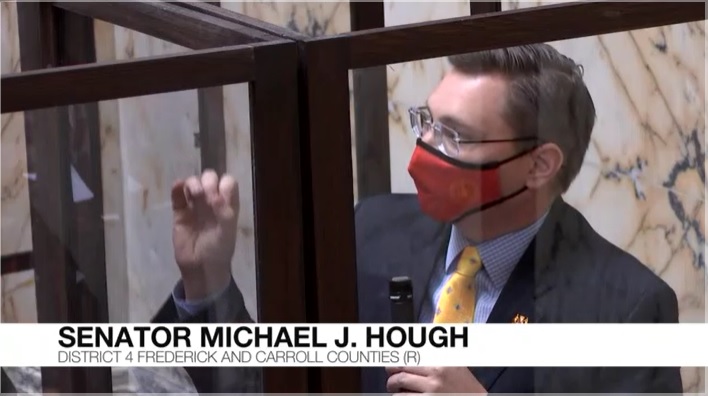 Sen. Michael Hough speaks for his bill on internet auto pricing Feb. 3. on the Senate floor.

Buyers searching to purchase a car on the internet hope to find the lowest price but often auto manufacturers are forcing dealers to post a minimum advertised price that is actually higher than what they might be willing to sell the car for.

A bill, SB208, to allow dealers to post the lowest sale price without being punished by the manufacturer, sailed through the Maryland Senate two years in a row with little or no opposition.

But the House Economic Matters Committee killed the House version of the measure, HB659, Monday in a close 11-12 vote lead by committee Vice Chair Kathleen Dumais, D-Montgomery. Both support and opposition to the legislation is bipartisan in both chambers, with both Democrats and Republicans voting for and against the measure.

“All this is is truth in advertising,” lead sponsor Sen. Michael Hough, R-Frederick, told the Senate last month. “The manufacturers should not be bullying the dealer” on price.

The legislation was being backed by the Maryland Consumer Rights Coalition, the Auto Consumer Alliance, the Consumer Federation of America and Attorney General Brian Frosh.

“The price people see on the website can be $1,500 to $2,000 more” than the actual sales price, said Franz Schneiderman of the Auto Consumer Alliance.

The only dealer publicly backing the bill was Jack Fitzgerald of Fitzgerald Auto Malls, one of the largest car dealers in Maryland with 13 locations in five counties selling 16 different brands.

“We’re just trying to put up the prices we’re really going to sell it for,” Rob Smith representing Fitzgerald told the Senate committee.

Fitzgerald was one of the first dealers to fully embrace internet marketing and no-haggle pricing, and he has often stood alone in Annapolis taking on the auto manufacturers.

“This is a special law for one dealer,” said DLA Piper lobbyist Paul Tiburzi representing General Motors. “There’s no reason to pass this just for him.”

There are dealers who privately support the legislation, Smith said. Lobbyist Rob Garagiola said other dealers are afraid to buck the manufacturers.

Legislators like Dumais opposing the bill said there is nothing to stop Fitzgerald from posting the lower price on the internet. But that may cost him advertising dollars given to the dealers who agree to post a uniform price for their cars. That is what the bill was seeking to prevent.

Dumais and other delegates were concerned about interfering with the franchise agreements between dealers and manufacturers that might put some dealers at a disadvantage. She said she had nothing against Fitzgerald and actually bought a car from one of his dealerships.

The delegates supporting the measure said it would give consumers who are doing much of their car shopping on the internet more accurate information in the often difficult process of buying an auto.