BUSINESSES PROTEST SERVICE TAX: Business advocacy groups converged on Annapolis on Monday to protest legislation that would expand Maryland’s sales tax to services not currently taxed and raise an estimated $2.9 billion over the next five years to help fund the recommendations of the Kirwan Commission, Bryan Renbaum of MarylandReporter writes.

LUEDTKE WILLING TO AMEND SERVICES TAX BILL: Faced with hours of testimony about adverse economic impacts and difficulties in implementing the services tax proposal, Del. Eric Luedtke said he was open to amendments on the bill, including to exempt more transactions from the expanded service tax or to further decrease the sales tax rate, Danielle Gaines of Maryland Matters reports. 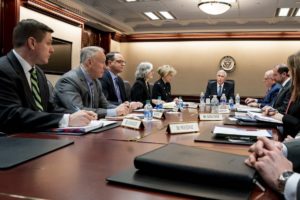 Vice President Mike Pence, center, held a meeting in the Situation Room at the White House on Monday to discuss the coronavirus. Gov. Larry Hogan, sitting to the vice president’s immediate left, attended in his role as chair of the National Governor’s Association.

HOGAN, PENCE MEET OVER COVID 19: Three people considered at possible risk for coronavirus in Maryland do not have the disease, while a fourth case has been sent to the Centers for Disease Control and Prevention for testing. Meanwhile, Bruce DePuyt writes in Maryland Matters, Gov. Larry Hogan (R), as the head of the National Governors Association, attended a White House meeting led by Vice President Mike Pence, the coordinator of the federal government’s response to the disease.

REDISTRICTING REFORM: House Bill 1491 seeks to place an “anti-gerrymandering” constitutional amendment onto the November ballot. If approved, future legislatures would have to adhere to the same standards when drawing congressional districts that the Maryland Constitution requires of state legislative districts, Bruce DePuyt of Maryland Matters writes..

BILL WOULD END SHORE’S ABILITY TO STOP PROJECTS: A 40-year-old provision in state law that gives the nine counties of the Eastern Shore the ability to block big-ticket transportation projects may be in jeopardy. Senate President Emeritus Mike Miller (D-Calvert) has introduced legislation to repeal the shore counties’ special status, Bruce DePuyt of Maryland Matters is reporting.

STATE MIGHT COMPENSATE WRONGFULLY CONVICTED MEN: Three men wrongfully convicted for a 1983 murder will receive $2.9 million each in compensation if the Maryland Board of Public Works votes to approve the payments on Wednesday, reports Heather Cobun in the Daily Record.

BPW WILL RULE ON INSURANCE ADMINISTRATION’S LEASE: Renewing the Maryland Insurance Administration’s lease at a building in downtown Baltimore violated procurement law, the state’s contract appeals board has ruled, but it’s up to the Board of Public Works to decide if the contract stands, Adam Bednar of the Daily Record reports.

AFTER DUI CHARGE, DELEGATE STEPS AWAY FROM LEADERSHIP: Del. Jay Walker (D-Prince George’s), who is facing DUI and DWI charges after being stopped by the Charles County Sheriff’s Department Sunday morning, called his arrest “unfortunate” Monday evening and said he looks forward to proving his innocence, Hannah Walker writes in Maryland Matters.

CRAB HOUSES SEEK 64,000 MORE VISAS: Rachel Menitoff of WJZ-TV reports that nine picking houses in Dorchester County produce about 95% of Maryland’s crab meat. But many of them said they’ll be forced to scale back or close altogether without the additional seasonal workers. A group of industry representatives and a bipartisan group of state and federal lawmakers are asking the federal government to issue an additional 64,000 visas.

800 POSSIBLE UNPAID WATER BILLS IN B’MORE: An ongoing audit of Baltimore’s water billing system has identified nearly 800 accounts or addresses that need to be investigated to determine if they are properly paying for water, including 240 locations that may never have been billed, Kevin Rector of the Sun reports.

HARFORD MOSQUE PLANS DRAW CONDEMNATION: Plans to build a mosque on a nearly 12-acre site in the Creswell area south of Bel Air have drawn condemnation from local residents, even threats via social media to destroy the house of worship, David Anderson of the Aegis reports.