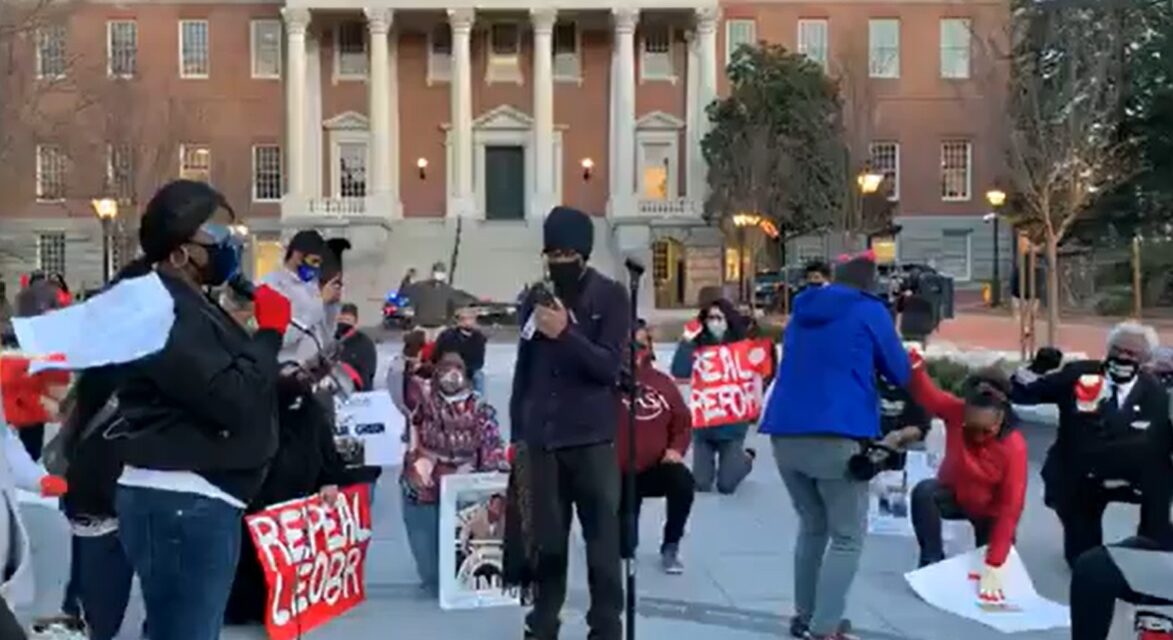 The Maryland Coalition for Justice and Police Accountability and other groups demonstrated Thursday outside the State House, supporting stronger police reforms than passed by the State Senate Wednesday. From its Facebook video.

VACCINE PLANS TO ADDRESS CONCERNS IN PG: The governor’s office also announced plans for the state’s Vaccine Equity Task Force to partner with the First Baptist Church in Glenarden and University of Maryland Capital Region Health to create a large, community-focused vaccination site in Prince George’s County in Upper Marlboro, Brian Witte reports for the AP in the Cumberland Times-News.

ANALYSIS: IS MD BETTER THAN MOST FOR VACCINES? Doing a deep dive into state rankings, Nathan Ruiz of the Sun questions whether Maryland should be considered “better than most states” in terms of vaccine distribution, as Hogan has claimed.

POLICE REFORM ACTIVISTS CALL FOR MORE: A crowd of activists marched on Annapolis Thursday afternoon, calling for “real police reform” only a day after the Maryland Senate passed a package of nine policing bills that many members touted as the most consequential policing reforms in 50 years, Bryn Stole reports for the Sun. Protesters called out for “no incremental change.”

BWI WORKERS WOULD GET JOBS BACK WITH RIGHT OF RECALL: Labor activists are supporting a bill that would mandate private-sector employees at the Baltimore/Washington International Thurgood Marshall Airport be allowed to return to their jobs when hiring resumes after the pandemic that has hit the travel and hospitality industries so hard, Johanna Alonso reports for The Daily Record.

HOGAN CALLS FOR INVESTIGATION INTO FAILING SCHOOL: Baltimore City Schools has known for almost two years about problems at Augusta Fells Savage Institute for Visual Arts, according to internal documents reported on by Amy Simpson at WBFF. Gov. Larry Hogan is calling for a state investigation into the school, Chris Papst also reports for WBFF.

SUICIDE RISE SPARKS LAWS TO HELP: A rise in suicides and concerns about police interactions with those threatening to self-harm have prompted measures that would ease costs for certain treatment and require more training for law enforcement, Darryl Kinsey Jr. and Callan Tansill-Suddath report for the Capital News Service in The Daily Record.

LEGISLATIVE FIGHT OF 2023: The legislative fight far into the horizon for the Maryland General Assembly is electric and natural gas deregulation, Josh Kurtz writes for Maryland Matters, covering a hearing of the bill doomed to fail this year.

SCHOOLS PUT OFF STANDARDIZED TESTING: Worried about scheduling while so many students are virtual, the Maryland State Board of Education voted to postpone state standardized assessments until the fall, Katryna Perera reports for The Frederick News-Post.

SCHOOLS EMBRACING OPEN WINDOWS, EMPTY BUSES: As students return to classrooms, the buses are nearly empty and the windows are open even as heat is pushed through the buildings, but Anne Arundel schools are embracing the inefficiencies to keep everyone safer, Rachel Pacella reports for the Capital Gazette.