Sen. Chris West (R-Baltimore County) said he has serious concerns about legislation that would provide both criminal and civil penalties for police officers who decline to intervene when their fellow officers use excessive force against a suspect.

The legislation SB0050/Criminal Procedure-Police Officers-Duty to Intervene is sponsored by Sen. Jill Carter (D-Baltimore City). Under it, officers who fail to intervene in cases of excessive force could face up to 5 years in prison and/or a fine of up to $10,000. Testimony on the legislation was heard by the Senate Judicial Proceedings Committee on Thursday alongside another bill sponsored by Carter that would increase whistleblower protections for officers who come forward with complaints about the conduct of their fellow officers.

“Your bill provides for putting the bystanding officer in prison for up to five years and fining the officer $10,000 and subjecting him to a civil cause of action which could bankrupt him and his family. Because in a split second in the judgment of a jury after the fact he didn’t appropriately. That’s what this bill does, doesn’t it?,” West interjected.

Carter refused to back down.

“It’s a little more than that… I don’t think the penalty is excessive in light of the fact that we are talking about a failure to save a human life or some other situation like that. I don’t think subjecting the officer to these penalties and a balancing test is unfair or outweighs the importance of having that requirement so that officers don’t hesitate. What we want is for officers not to hesitate to intervene because they can save other people’s lives.”

Carter said having a criminal penalty in place for officers who choose not to intervene in cases of excessive force is necessary because in many cases police departments are complicit in schemes to keep such cases from being made public.

Sen. Bob Cassilly (R-Harford) expressed concern that the legislation would lead to distrust among officers.

“Every cop within ten feet under this bill who could have stepped in there..So we end up with every cop at the scene second-guessing and re-thinking…these are split-second decisions. And, ‘Did you see what that officer saw?’ And you just got here. And he was here for ten minutes. You got here thirty seconds ago. You don’t know what just happened over the last nine minutes. But you walk up and you’re like: ‘Woah is this excessive?’ But you didn’t see what happened before that. So we’ll just indict everybody.”

Cassilly said he concurs with legal guidance from the attorney general’s office that says officers do have a duty to intervene in cases of excessive force but emphasized that failure to do so should remain an administrative matter per the guidance.

Cassilly said the legislation’s penalties are too harsh and could lead to mass indictments.

The legislation is part of a series of police accountability bills the committee began considering in September. The bills are a response to both state and nationwide protests over police misconduct that has in many cases resulted in the fatal shootings of unarmed African-Americans. 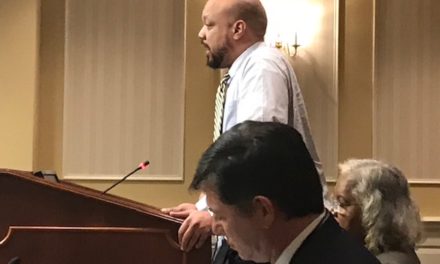