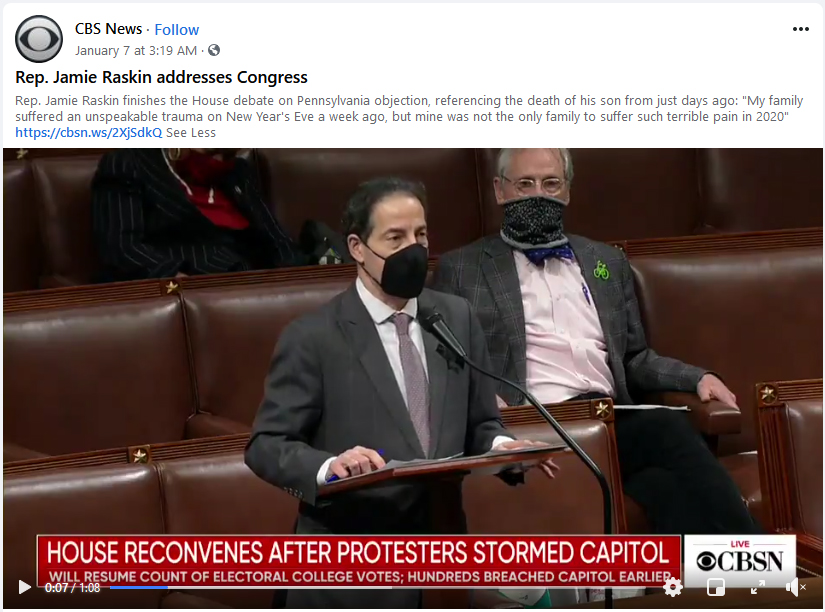 Maryland U.S. Rep. Jamie Raskin addresses the House during the challenge to the Pennsylvania vote after the insurrection at the U.S. Capitol was quelled. Screenshot from CBS News Facebook page.

POLICE REFORM, EDUCATION AMONG ISSUES ON AGENDA: Pamela Wood of the Sun outlines the key issues that will be brought up by the General Assembly during this 90-day session that begins on Wednesday. They include: police reform, public education – including overriding Gov. Hogan’s veto of the Kirwan plan – and pandemic proposals.

HEALTH AID FOR POOR GETS MAJOR BACKING: A legislative proposal that would incentivize health care providers to set up or extend services in poor and rural communities using funds generated from an increase in the alcohol sales tax has been endorsed by dozens of nonprofit and civic groups — including the state’s largest medical system, Hallie Miller of the Sun reports.

BIZ GROUPS SEEK STATE AID: Business groups around the state will be looking for assistance from state government during the 2021 General Assembly session as they struggle to regain their footing in the wake of the COVID-19 pandemic that has hobbled the state’s economy, Bryan Sears and Johanna Alonso of the Daily Record reports.

RASKIN PUSHES 25th AMENDMENT, IMPEACHMENT FOR TRUMP: U.S. House Democrats are considering swiftly approving Maryland Rep. Jamie Raskin’s legislation to activate a never-used section of the 25th Amendment under which President Donald Trump — or any unfit chief executive — could be removed from office, Jeff Barker of the Sun reports.

HOGAN: MD GUARD WAS READY; PENTAGON KEPT THEM AT BAY: Maryland’s National Guard was immediately readied to tackle the Capitol riots — but the Pentagon didn’t allow it to deploy for almost two hours, even as lawmakers begged for their help, Gov. Larry Hogan charged Sunday, Mark Moore and Lee Brown of the New York Post report.

HOGAN LAYS RIOT AT TRUMP’s FEET, ‘OUTRAGED’ BY HARRIS: Gov. Larry Hogan said Sunday on CNN’s State of the Union with Jake Tapper that President Donald Trump bears responsibility for the group of rioters who stormed the U.S. Capitol building last week, threatened members of Congress and ransacked the seat of the legislative branch, Christine Condon of the Sun writes. When asked about Maryland congressman Andy Harris, who continued to object to the presidential election results in Congress even after the rioters stormed the Capitol, leaving several people dead. “I’m not sure what Congressman Harris should do, but I was extremely outraged at some of the things he did and said.”

UMD PROF WEIGHS IN ON CAPITOL RIOTERS: Bryan Renbaum of Maryland Reporter interviews Professor Michael Greenberger about the legal implications of the recent attack on the U.S. Capitol by supporters of President Donald Trump.

RASKIN ON CAPITOL LOCKDOWN, SON’s DEATH: John Hendrickson of the Atlantic speaks with U.S. Rep. Jamie Raskin about the tragic days that he lived through since the beginning of the year, with the suicide of his son, his burial and the insurrection at the U.S. Capitol that sent him, fellow lawmakers and his own family members and staff into lockdown, followed by early morning drawing up of impeachment articles against President Donald Trump.

RASKIN AIDE ON LOCKDOWN FROM HER POINT OF VIEW: Julie Tagen, Chief of Staff to U.S. Rep. Jamie Raskin, wrote an account of her experience during the attack on the U.S. Capitol last Wednesday. At one point, she writes, “it began to look like mayhem. Scores of angry white men with Trump and Confederate flags stomped around, clad in camouflage and flak jackets.” Seventh State reprints the account. You can find it here.

EX SENATE SERGEANT AT ARMS WORRIES FOR CAPITOL VULNERABILITY: Frank Larkin Jr. of Annapolis is worried the U.S. Capitol building is even more vulnerable during the security leadership transition ahead of the Jan. 20 inauguration of President-elect Joe Biden, Olivia Sanchez of the Capital Gazette reports. His opinion matters because he is a former sergeant at arms of the U.S. Senate, whose job was helping keep the seat of government safe.

COVID HOSPITALIZATIONS HIT NEW HIGH: COVID-19-related hospitalizations in both Frederick County and the state reached new highs Sunday as the pandemic continues into its 11th month, Hannah Himes of the Frederick News Post reports. In Frederick County, there were 65 people in the hospital for COVID-19 Sunday, 10 of whom were in intensive care. Across the state, 1,950 people were hospitalized, and 485 intensive care beds were in use.

FIRM DROPS OUT OF HIGHWAY BIDDING: One of the private-sector groups that expressed initial interest in the Hogan administration’s plan to widen two Washington, D.C.-area highways has dropped out of the bidding, the state Department of Transportation confirmed on Friday. Potomac Mobility Group, one of four consortiums rated “qualified” by the state last year, declined to submit a bid, Bruce DePuyt of Maryland Matters reports.

REID NOVOTNY TAPPED TO FILL DEL. MILLER’s SEAT: Reid Novotny has been selected by the Republican central committees of Howard and Carroll counties to fill the District 9A vacancy in the House of Delegates, left by the retirement of Warren Miller, Ana Faguy of the Howard County Times reports. Novotny’s name was sent to Gov. Larry Hogan on Friday for approval before the 442nd session of the Maryland General Assembly begins Wednesday.

DEATH ROW INMATE FROM MARYLAND: As with many death row inmates, the final days before Dustin John Higgs’ scheduled execution Jan. 15 are marked by a flurry of last-minute legal appeals to spare his life, Jean Marbella of the Sun writes. But the fate of Higgs, 48, convicted of murdering three women in Prince George’s County in 1996, hinges as well on the two inescapable events currently roiling the country: the chaotic end of the presidency of Donald Trump and the raging coronavirus pandemic.

PPP REOPENS FOR NEW ROUND OF LOANS: The federal Paycheck Protection Program reopens today for a new round of loans that includes funds set aside for smaller businesses in low- and moderate-income communities and give first priority to community lenders, reports Lorraine Mirabella for the Sun.

FRANCHOT PUSHES SUPPLEMENT TO FEDERAL AID: Comptroller Peter Franchot is pushing the idea of a Maryland stimulus package to supplement the federal package Congress passed in December. Joel McCord of WYPR-FM reports that Franchot says the $600 checks in that package will be of little help and that Maryland should issue the $2,000 checks that Congress rejected, and that President Trump called for in his criticism of the bill.

DEL. HEALEY TALKS ABOUT BREAST CANCER: Veteran Maryland Del. Anne Healey (D-Prince George’s), 70, is undergoing treatment for breast cancer and says she wants to discuss her diagnosis as a way of reminding people to seek preventive care during the pandemic, reports Ovetta Wiggins for the Post. Healey, who has served in the Maryland General Assembly for 30 years, said she was diagnosed in June. She credits early detection with preventing the spread of her cancer.

EX DEL. GLENN ON HOME CONFINEMENT: Cheryl Glenn, the former state delegate from Baltimore convicted of taking bribes, has been released from prison and will serve out the rest of her sentence in home confinement, Justin Fenton of the Sun reports. Glenn, 69, who reported to prison at the end of September to serve a two-year sentence, had filed a sealed emergency motion Dec. 14 seeking compassionate release,

CONTENDERS LINE UP TO REPLACE STATE SONG: As the state song Maryland My Maryland appears to be on the way out, a number of people have stepped forward with proposed replacements, writes Louis Peck for Maryland Matters.

ANTI-TRUMP GROUP IN CARROLL CONTINUES WEEKLY PROTEST: Bob Blubaugh of the Carroll County Times reports that the weekly the anti-Trump Patriots Resist rally has been a common sight in Westminster over the past four years. Founder Henry Reiff said Saturday afternoon that not turning up after what happened Wednesday would’ve sent the wrong message and, despite Carroll County voting overwhelming for Trump, that between 20 and 30 showed up and that numerous cars driving up and down Main Street waved and honked horns in a supportive manner.