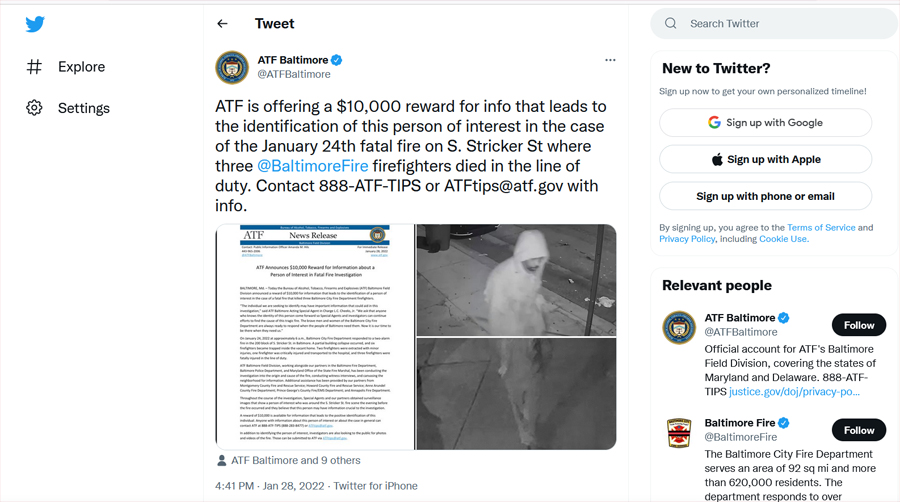 The ATF, the state and local jurisdictions are offering a reward for information concerning a 'person of interest' in the collapse of a building in Baltimore in which three firefighters were killed and one was seriously injured. The initial reward of $10,000 is now $100,000. Screenshot from ATF Twitter page.

NEW MAP CHALLENGE DUE FEB. 10: The legal clock is ticking for anyone who wants to challenge the new map of Maryland’s General Assembly districts. Following Thursday’s final adoption of a map laying out the boundaries for all 47 senators and 141 state delegates, Chief Judge Joseph M. Getty of the Court of Appeals ruled that those who wish to challenge the maps must do so by Feb. 10, and the state will be required to offer its response by Feb. 15. On Feb. 17, a conference will be held to schedule the rest of the legal process. for the anticipated legal challenges. Pamela Wood/The Baltimore Sun.

JANUARY COULD BE DEADLIEST MONTH FOR COVID: January is poised to be Maryland’s most deadly month of the coronavirus pandemic, according to state data, even as the number of new infections reported daily trends downward. Hallie Miller and Meredith Cohn/The Baltimore Sun.

GOP ELECTION JUDGES IN SHORT SUPPLY IN ARUNDEL: Five months out from Maryland’s primary election in June, the Anne Arundel County Board of Elections is seeking about 650 Republicans to serve as election judges. To boost hiring, about 80,000 registered Republicans were set to receive flyers in the mail this week and last, recruiting them to help run the 200 or so polling places throughout the county for both the primary and the Nov. 8 general elections. Brooks DuBose/The Capital Gazette.

OPINIONS: FUROR BIPARTISAN OVER PUBLIC FUNDING MESS IN HOWARD: Maryland Reporter publishes three commentaries on problems with the public financing of this year’s local elections in Howard County. The first is by County Council Member Deb Jung, an incumbent Democrat whose public funding is being held up. The second is a Jan. 20 official statement from Howard County Executive Calvin Ball, a Democrat who helped passed the law but whose administration is refusing to distribute the money until problems with the law are corrected. The third is the reaction of county Republican chair Stephen Wilson to Ball’s statement. 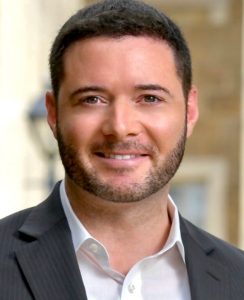 MIELE TO SEEK SENATE SEAT IN HARFORD: Christian Miele served in the House of Delegates from Baltimore County, then fell short in his bid to unseat a Democratic incumbent in the state Senate. Now, he’s got his sights set on another Senate race — this time in Harford County. Miele, a Republican, is seeking the District 34 Senate seat. “Public service is just something that I feel is in my DNA,” he said. Jason Fontelieu/The Aegis.

GOVERNOR’s RACE ENDORSEMENTS: In the crowded race for governor, who has endorsed the candidates? On the Democratic side they are: Doug Gansler, John King, Peter Franchot, Rushern Baker, Tom Perez and Wes Moore. And on the Republican side: Dan Cox and Kelly Schulz. Staff/Maryland Matters.

OPINION: CLOSED PRIMARIES DISENFRANCHISE MO CO’s UNAFFILIATED VOTERS: Colin Alter writes in a commentary for Maryland Reporter that most Montgomery County residents know the county’s voter registration records show that the Democratic Party dominates the registration, with 61% of the electorate.  Less known, however, is that the second largest registration is for those who are ‘unaffiliated’ in their registration, numbering 22% of those registered.  These 151,000 people have little choice when it comes to electing the next country executive and members of the County Council.  The Republican Party claims only 14.7% of the total, slightly less than 100,000 voters, a number that has continued to fall.

OPINION: DEMS USE TRUMP ENDORSEMENT OF COX: Brian Griffiths of the Duckpin writes that the Democratic polling firm Public Policy Polling is pushing Dan Cox’s endorsement for governor by Donald Trump in a new push poll that is hitting phones across Maryland. “I know because I was polled,” Griffiths writes.

INTERVIEW WITH HANS REIMER: Here’s the interview with Hans Reimer, candidate for the Democratic nomination for Montgomery County executive, that should have run Friday. Reimer said, he believes his “lane” of politics is wide. “It’s the lane of practical, forward thinking progressive values—willing to make hard decisions. I think that’s what most voters want. They have one set of beliefs about national politics and a different set of concerns about the county. They’re looking for pragmatic, thoughtful leadership.” Louis Peck/Bethesda Beat.

THE MONEY RACE: MONTGOMERY COUNTY COUNCIL: Montgomery County Council member Andrew Friedson, who is running unopposed for re-election in District 1, has by far the most money on hand of any county candidate, according to the annual financial report that was due to state officials earlier this month. Steve Bohnel/Bethesda Beat.

STATE STUDIES INCREASED MARC SERVICE TO FREDERICK: Increased MARC train service to Frederick has been a dream and a priority of local leaders for years, and the state’s Department of Transportation is working on a study to look at the feasibility of adding more trains along the system’s Brunswick Line. Ryan Marshall/The Frederick News-Post.

REPORT: BA CO SCHOOL BOARD VIOLATED STATE LAW: The Baltimore County school board violated state law by hiring outside counsel in 2019 to assist with the search for a new superintendent, the state’s inspector general for education found in recently released report. The school board said in a response filed this week that it agreed with the inspector general’s report but pushed back on some of the report’s reasoning. McKenna Oxenden/The Baltimore Sun.

GOP AVOIDING BA CO COUNTYWIDE RACES: Despite predictions that 2022 could be a big year for the GOP, well-known Baltimore County Republicans are shying away from the two county-wide seats that will be on the ballot this fall. And the deadline to file for candidates to run in Maryland is only three weeks away. State Sen. Chris West and others explain. John Lee/WYPR-FM.

THE MONEY RACE: BALTIMORE COUNTY COUNCIL: Those running for Baltimore County Council have been raising money for their races, including Del. Pat Young, who is leaving his District 44B House seat to seek the council seat being vacated by Tom Quirk. Who’s on top? Taylor DeVille/The Baltimore Sun.

HOGAN TO HONOR 3 FIREFIGHTERS WHO DIED IN BUILDING COLLAPSE: Gov. Larry Hogan will present memorial citations at two fire stations in Baltimore on Monday in honor of three firefighters who died after part of a burning house collapsed on them. Staff/WJZ-News.

REWARD OFFERED FOR INFO IN FIREFIGHTERS’ DEATHS: The federal Bureau of Alcohol, Tobacco, Firearms and Explosives is offering a reward for information about a man they called a “person of interest” in an investigation into the rowhouse fire that killed three Baltimore firefighters and injured a fourth Monday. The original $10,000 reward grew to $100,000 by Saturday with pledges from the state of Maryland, local officials and firefighters. Taylor DeVille/The Baltimore Sun. 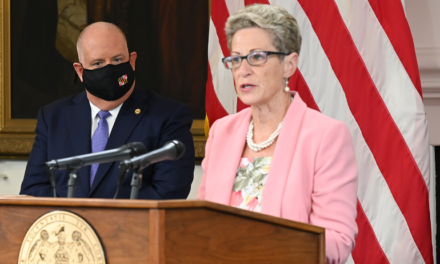