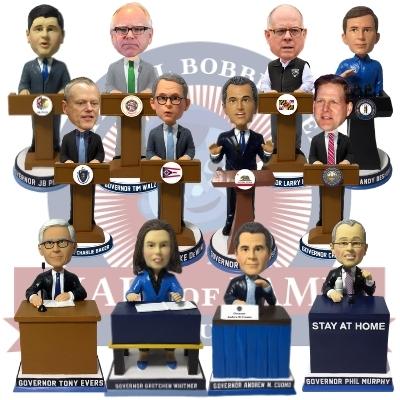 Gov. Larry Hogan, top row, second from right, will be joining the collection of bobblhead governors at the National Bobblehead Hall of Fame and Museum. The Milwaukee museum ammounced. "We will be donating $5 from every Governor Hogan Bobblehead sold to the Protect The Heroes fund in support of the 100 Million Mask Challenge, which is the same cause that the Hall of Fame and Museum has raised over $275,000 for through the sale of bobbleheads of Dr. Anthony Fauci, Dr. Deborah Birx and eight other Governors and 35 different Essential Hero professions." The figurines of Hogan, with the head clearly awaiting design, won't be available till January. Photo from the company website.

POLL: HALF OF MD VOTERS TO MAIL BALLOTS: Nearly half of Maryland voters who plan to participate in the November election say they will vote by mail, a poll released Thursday shows, Emily Opilo of the Sun is reporting. The Goucher College Poll reports 48% of likely voters surveyed expected to use a mail-in ballot and either mail it in or take it to a ballot drop box. Fifty-one percent planned to vote in person, either on Election Day or at early voting centers.

MD ELECTIONS ALMOST READY TO ROLL: Maryland’s top elections official said Wednesday that things so far are going according to plan for this fall’s general election, Pamela Wood of the Sun reports. “We’re well underway. We are just about ready to rock and roll here,” said Linda Lamone, administrator of the Maryland State Board of Elections.

COURT FEES, FINES CAN LEAD TO CYCLE IN JAIL: Between court-mandated fines, fees, child support arrears and restitution, those who tangle with Maryland’s justice system incur a wallet-draining list of expenses, often leaving them in debt and prone to cyclical incarceration, Hannah Gaskill of Maryland Matters reports.

BRAVEBOY PUSHES AGAINST VOTER INTIMIDATION: Prince George’s County State’s Attorney Aisha Braveboy wants to ensure voter intimidation doesn’t take place in the majority-Black jurisdiction during the general election, William Ford of the Washington Informer writes. Her office launched “Operation Protect the Vote for All” which focuses on making sure vulnerable populations such as senior citizens, immigrants and those in the LGBTQ community aren’t intimidated and can vote.

LEGALIZING SPORTS BETTING: Two members of the Senate Budget and Taxation Committee who sit on opposites sides of the aisle emphasized their support for an initiative on the Nov. 3 ballot that would legalize sports betting in Maryland-highlighting potential economic gains and downplaying potential negative consequences, Bryan Renbaum writes for MarylandReporter.

OPINION: RACING AT A CROSSROADS: Patrick Cummings of the Thoroughbred Idea Foundation writes in a column for MarylandReporter that the state of wagering on Maryland racing is vital to all of the industry’s economic drivers, mostly within the agricultural sector. And, unlike any other professional sport, racing exists at the level it does almost exclusively because of legal wagering. Wagering on racing is the sport’s only self-sustaining source of income for the industry. If betting on racing declines, that is a troubling indicator for the entire industry.

COVID HOSPITALIZATIONS HIGHEST IN MONTH: The number of Marylanders currently hospitalized due to coronavirus reached 391 on Wednesday, the highest figure in more than a month, state data show. The state’s hospitalizations are the highest they have been since reaching 395 on Sept. 4, Marcus Dieterle of Baltimore Fishbowl reports.

AUDIT: HUNDREDS OF DRIVER’S LICENSES FRAUDULENTLY OBTAINED: Maryland’s Motor Vehicle Administration is making sweeping changes after an audit reveals it granted driver’s licenses to hundreds of drivers who fraudulently obtained them. The findings were laid out in a recent audit performed by Maryland’s Office of Legislative Audits, Jeff Abell of WBFF-TV reports.

HEALTH INSURANCE RATES CONTINUE TO DECLINE: If you’re a Marylander in need of health insurance for next year, the open enrollment period starts in November and rates have gone down since last year. Sarah Kim of WYPR-FM reports. Maryland Insurance Commissioner Kathleen Birrane said prices for insurance plans have dropped for three consecutive years, for an approximate cumulative 30% drop since 2018.

MARYLAND SCHOOLS CONTINUE TO BE AMONG MOST FUNDED: Maryland public schools continue to be among America’s most funded, according to recent federal data. But for the first time since Project Baltimore launched in 2017, Baltimore City is not the most funded public school system in the state when it comes to per-pupil spending, Chris Papst reports for WBFF-TV.

FREDERICK SCHOOL BOARD VOTES DOWN HYBRID MODEL: Frederick County Public Schools students and staff will continue to operate under a virtual learning model until at least the end of the semester following two failed votes at Wednesday’s Board of Education meeting, Katryna Perera reports for the Frederick News-Post.

MO CO ED BOARD TO SURVEY ON SCHOOL NAME CHANGES: After a flurry of petitions calling attention to local schools whose namesakes were slave owners, the Montgomery County Board of Education will survey those communities to see if they want to change the schools’ names, Caitlynn Peetz reports for Bethesda Beat.

ROCKVILLE ATTY SEEKS TO BREAK PRECEDENT FOR JUDGESHIP: Rockville attorney Marylin Pierre is hoping to break precedent by winning election to a 15-year term on the circuit court bench in Montgomery County. She is competing against four sitting judges who were appointed or reappointed by Gov. Larry Hogan over the past two years. Pierre is seeking to put a 50-year-old process for vetting judicial candidates on trial — a system that operates on the basis of “legacy and pedigree,” she charged in a recent interview, Louis Peck of Bethesda Beat reports.

HOPKINS DOC TREATING TRUMP: Dr. Brian Garibaldi, the Johns Hopkins doctor who is consulting with Walter Reed National Military Medical Center experts and the White House Medical Unit in treating President Donald Trump for Covid-19, is a top respiratory and critical care doctor who helped design a specialized ward to treat the sickest and most contagious patients in the country, Meredith Cohn of the Sun reports.

ARIZONA LAWMAKER IMPROVING AT HOPKINS: An Arizona lawmaker ill with COVID-19 who is on a ventilator in the Johns Hopkins Hospital’s intensive care unit is showing some signs of improvement, his wife announced Wednesday, the AP is reporting.