$53M REVENUE WRITE-DOWN: State analysts said Wednesday that fearful federal workers, the elderly and struggling families are buying less than expected this year, reducing state sales tax receipts by about $72 million, Erin Cox is reporting in the Sun. That trend was the biggest contributor to a $53 million revenue write down the Board of Revenue Estimates approved Wednesday. The state’s chief revenue forecaster blamed President Donald Trump’s budget-cutting rhetoric for causing economic trepidation among the state’s large federal workforce.

PESSIMISM ON RACE RELATIONS: Maryland residents are pessimistic about race relations, with a strong majority saying in a new poll that the situation has recently “gotten worse” in the state, reports Erin Cox and John Fritze in the Sun. Though people most feel there is a problem in the state, the poll found African Americans and whites hold very different perspectives on the pervasiveness of workplace discrimination, the extent of unfair policing practices, and the propriety of taking down Confederate monuments or letting white supremacists rally in public.

FOOSE DECLINES ED JOB OFFER: Renee Foose, whose tumultuous tenure as Howard County school superintendent ended in May, said Wednesday she has declined to take a position with the Maryland State Department of Education that had been approved by the state school board Tuesday, the Sun’s Liz Bowie and Erin Cox report. Foose said in an email Wednesday evening, “The only way to change this toxic environment is to demonstrate civility and lead by example. I have a great deal of knowledge and skills to contribute, but not at the expense of having my family, friends and colleagues attacked and harassed.” 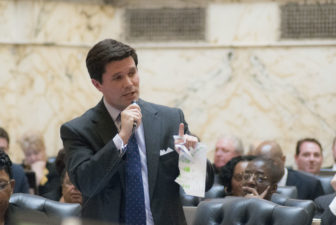 THE FRICK EFFECT: Josh Kurtz of Maryland Matters totes up the winners and losers after state House Majority Leader Bill Frick jumped from the 6th District congressional election to the race for Montgomery County executive. Even though he has waded into county issues before, Frick has always seemed more comfortable in Annapolis, and in a legislative environment generally. So in that respect, his decision to run for executive is surprising. Will Frick actually change the dynamic of the race?

HOGAN’s ROSH HASHANAH FAUX PAS: When Gov. Larry Hogan makes a transportation announcement in Montgomery County today, some local elected officials are likely to be absent. It’s Rosh Hashanah. Many of the local politicians are Jewish. And some are less than impressed with the political savvy of his scheduling, writes Michael Dresser in the Sun. “I am surprised and disappointed that the governor would hold a major event on the Jewish New Year,” said Sen. Cheryl Kagan, who is Jewish. “It seems unlikely that they would hold a similar event on Good Friday or Christmas out of respect for Marylanders observing their faith.”

BONUS FOR NEW CORRECTIONS OFFICERS: Maryland will offer a $5,000 recruitment bonus to new correctional officers to alleviate a persistent problem with vacancies in the state prison system, reports Michael Dresser in the Sun. Stephen T. Moyer, the secretary of the Department of Public Safety and Correctional Services, will hold a news conference today outside a recently closed part of the old Baltimore City Detention Center to announce the incentive.

HOGAN & HOGAN MYSTERY DINNER: Gov. Larry Hogan and his brother Tim, who runs the family’s real estate business, are due to appear together tonight at a dinner in Annapolis that Tim Hogan is sponsoring as a member of the Washington, D.C., Economic Club. What this dinner is about and how the Hogan brothers came to be appearing together is something of a mystery, Josh Kurtz of Maryland Matters writes.

FRANCHOT BACKS BALTIMORE FOR HQ2: Democratic Comptroller Peter Franchot on Wednesday joined a chorus of officials praising Baltimore’s Port Covington project as the best way to lure Amazon’s prized new headquarters to Maryland, Erin Cox of the Sun reports. “Port Covington would be the perfect site for Amazon,” Franchot said during his opening remarks at the regular Board of Public Works meeting in Annapolis.

IANNUCCI BACKS PG FOR HQ2: Bruce DePuyt interviews David Iannucci for Maryland Matters on Prince George’s attempt to lure the Amazon HQ2 there. If the Washington, D.C., region wins the competition for Amazon’s new headquarters, it will be because the workforce here is superior. That’s the view of the top economic development official in Prince George’s County, which this week publicly announced details of its bid to get the giant retailer to move to the county.

SUN UNHAPPY WITH BAKER: The Sun editorial board writes a letter to Baker, criticizing his county’s quest for the Amazon headquarters.

TRUTH & STATE CENTER: Jim Peiffer, former state Department of Transportation principal staff on the State Center project for six years before his retirement, writes in MarylandReporter that Barry Rascovar’s Sept. 4 column about State Center is very misleading. The stakes are high and clarity on details surrounding this project is very important –– particularly as the lack of transparency from the state grows. Key parts of his tale about a faulty plan, greedy developers, and changing economic circumstances are just not true.

BUSCH IS BACK: Ovetta Wiggins of the Post looks at House Speaker Michael Busch’s illness and road to recovery following a liver transplant. Now, he’s ready to get back to work.

RALLY AGAINST ‘TRUMPCARE:’ The event in the Washington suburb of Silver Spring was billed as a public forum on Medicaid in the state of Maryland. But with Republicans just 10 miles away in the U.S. Senate working to undo Obamacare, it more closely resembled a campaign rally for the resistance. U.S. Rep. Jamie B. Raskin (D-Md.) denounced the latest Republican effort to gut the federal Affordable Care Act, calling it “Trumpcare” and a “mutating monstrosity,” reports the Post’s Jenna Portnoy.

VIGNARAJAH’s ANNOUNCEMENT: Samuel Manas of Maryland Matters writes that Krishanti Vignarajah, a former policy director for Michelle Obama, formally announced her candidacy for governor of Maryland Tuesday afternoon, laying out a wide platform and striking out at Gov. Larry Hogan (R) on his relationship with President Trump.

YOUNG PG DEMS CHALLENGE INCUMBENTS: Writing in MarylandReporter, Mark Rose reports that a group of young Democratic challengers in their 20s and 30s has emerged in Prince George’s County to run for the House of Delegates in 2018 and take on incumbent Democrats. The challengers cite a need for fresh blood and new ideas in a delegation they say has gotten out of touch with the voters and ineffective at getting things done.

ANNAPOLIS MAYOR’s RACE: The primary election handed Annapolis a few surprises Tuesday, with an incumbent unseated, an incredibly close Ward 4 race and newcomer Gavin Buckley defeating state Sen. John Astle for the Democratic mayoral nomination. The results set the stage for a general election that will likely be incredibly competitive and expensive. Buckley’s win sets up what appears to be a competitive race against incumbent Mayor Mike Pantelides, Chase Cook of the Annapolis Capital reports.

INFO RELEASE SOUGHT IN HARASSMENT PROBE: Several Washington County commissioners said Wednesday they favor releasing more information to the public in the coming weeks stemming from a completed investigation into sexual harassment claims by a now-former county employee against a fellow commissioner, Tamela Baker and CJ Lovelace report for the Hagerstown Herald-Mail.