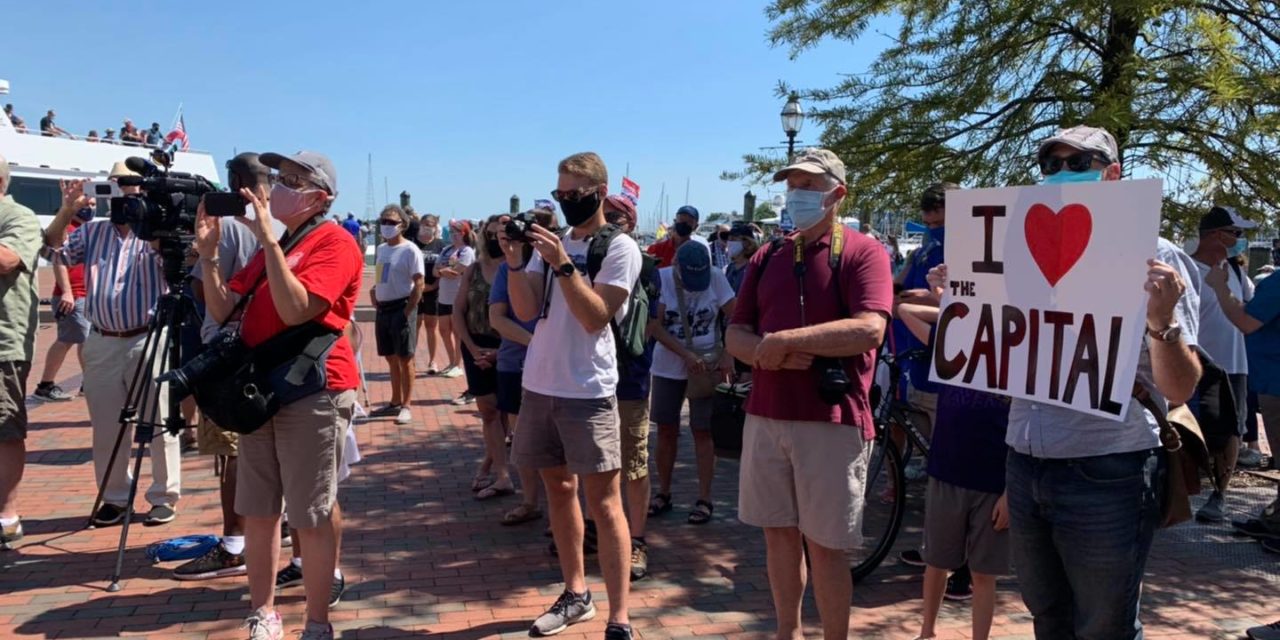 Staffers and concerned readers rallied at the Annapolis city dock Monday opposing the closing of the newsroom of the Capital Gazette. Tom Jackman of the Washington Post has the story below. Photo from Pamela Wood's Facebook page.

CAPITAL GAZETTE LOCKED OUT OF NEWSROOM: The staff of the historic Annapolis Capital and Maryland Gazette made plans to clear out their desks on Labor Day, to stage a final rally and farewell to their bricks-and-mortar headquarters, which their owners have decided to close. But, reports Tom Jackman for the Post, when Tribune Publishing learned of the rally it locked the Capital Gazette staff out of the building, saying that the event “raises important Covid-related health concerns,” according to a text message from a labor relations executive. About one-third of Tribune Publishing is owned by Alden Global Capital, which has been accused of purchasing news outlets, then stripping their assets.

STATE SENATE CAPS NEW BILLS: Maryland state senators will have to pick and choose their legislative battles under a set of rule changes for the 2021 General Assembly. The changes come after a pandemic-shortened session this year in which there were complaints about the large number of bills introduced by some senators. Senate President Bill Ferguson warned in his memo that further limits could be imposed this year if leaders are forced to adjust the session because of COVID-19, reports Bryan Sears for the Daily Record.

SOME FAMILIES STUCK IN GAP IN JOBLESS BENEFITS: Nick Brewer is distracted. The 26-year-old father is trying to keep his young family of five going on $120 a week in unemployment payments from Maryland’s Department of Labor. Brewer of Salisbury hopes he’ll start receiving more money soon. But like thousands of other Marylanders on unemployment, he’s stuck in a gap between federal jobless benefits. He expects to start getting $300 in weekly benefits through another federal program Maryland recently joined, according to a story in the Hagerstown Herald-Mail.

TEAM COUNTING OF MAIL-IN BALLOTS NIXED: State elections officials on Friday nixed a requirement for a team to count mail-in ballots for the November election, citing the unprecedented volume of expected voting by mail. The emergency changes, which would only apply to the upcoming Nov. 3 election, provide that an individual election judge can canvass mail-in ballots by themselves – so long as the public can watch, Bennett Leckrone reports in Maryland Matters.

VOTING CENTERS IN PLACE – EXCEPT IN B’MORE: With fewer than two months remaining before the November election, voting center plans are in place for all jurisdictions across the state — except for Maryland’s largest city, reports Emily Opilo for the Sun. The State Board of Elections approved plans Friday for four more counties, firming up Election Day and early voting locations for most of the state. Nineteen counties were approved previously.

METRO A ‘TOXIC WORKPLACE:’ A scathing new report describes Metro’s rail operations center as a “toxic workplace” where employees are bullied, racially and sexually harassed, and told by managers to ignore authorities and operating procedures, creating chaos during emergencies and threatening passenger safety, Justin George of the Post reports.

HOWARD CHAMBER CHIEF UPBEAT ON JOBS: Howard County Chamber of Commerce President and CEO Leonardo McClarty said the numbers in the federal government’s latest jobs report are both “favorable and encouraging” and that he expects Maryland’s economy to improve as the state enters the final stage of its coronavirus recovery plan, writes Bryan Renbaum for MarylandReporter.

LACK OF PROSECUTION MINIMUM AGE CAUSES CONCERN: Juvenile justice reformers in Maryland are raising concerns that there is no minimum age in the state for prosecuting youthful offenders. The Juvenile Justice Reform Council, created by the General Assembly last year, met in an online session Thursday to discuss the youngest cases in which juveniles are introduced to the state’s justice system, Dick Uliano of WTOP-FM reports.

RISING PERCENTAGE OF COVID CASES: The percentage of Marylanders testing positive for the coronavirus continued to rise Monday, remaining above the World Health Organization’s 5% ceiling for the third straight day, according to tracking data by Johns Hopkins University, Jean Marbella of the Sun reports.

ARUNDEL COMMUNITIES EXCITED FOR SCHOOL: As schools gear up for the first online start, Anne Arundel County Public Schools Superintendent George Arlotto said school communities are excited to get back to school despite the challenges, Naomi Harris reports for the Capital Gazette. Throughout the pandemic, the school system had worked to get Chromebooks to children and increase connectivity. So far, the school system has acquired 55,000 Chromebooks, with 32,000 more ordered.

COVID-RELATED COLLEGE SUSPENSIONS UP: University spokespeople confirmed Sunday that just days into the start of the academic year, some Maryland universities that have reopened their campuses have issued interim suspensions to dozens of students believed to have violated coronavirus-related protocols and health guidelines, Hallie Miller and Wilborn P. Nobles of the Sun report.

HOOD COLLEGE ISSUES SHELTER IN PLACE ORDER: Following one student testing positive for COVID-19, Hood College instituted a shelter-in-place order Sunday night that will last at least 72 hours, Greg Swatek of the Frederick News-Post reports. The shelter-in-place edict was a cautionary move until Hood can determine the scope of the issue, according to Laurie Ward, the vice president for marketing and communications at Hood.

COVID WORSENS TU TOWN-GOWN ISSUES: The relationship between Towson University and its surrounding residential neighborhoods has been uneasy over the years, if not downright hostile at times, and the coronavirus is adding further strain, Taylor DeVille of the Towson Times reports. Some longtime residents fear students living and moving off-campus will spread COVID-19 to older, more vulnerable residents.

UM GIVES BUS DRIVERS RULE OVER RIDERS: Following an incident on a University of Maryland bus, the college issued a statement Monday morning that said it fully supports the driver “who put first the health and safety of everyone on the bus.” The statement said drivers can refuse to let people on board if they feel there are too many people on board already, or if passengers refuse to wear a mask. John Domen of WTOP radio reports.

UM RENAMES DEPT. FOR TUBMAN: Renaming the Department of Women’s studies is one of several steps that the University of Maryland says they’re taking to be more inclusive on campus. The new name? The Harriet Tubman Department of Women, Gender and Sexuality Studies, reports Valerie Bonk for WTOP-FM.

POLICE GUARD B’MORE FOP: Baltimore police set up a barricade with metal fencing and heavy city transportation vehicles around a Fraternal Order of Police building in North Baltimore Monday night in anticipation of a protest that never reached the destination, Meredith Cohn reports the Sun.

TRUMP FLOTILLA IN CRISFIELD: Republicans from around Maryland made the voyage to Crisfield on Saturday to join a statewide boat parade in support of President Donald Trump’s reelection, writes Olivia Sanchez for the Capital Gazette. Before the parade began, the flotilla of boats came together on the Tangier Sound, idling, honking horns and waving at friends. They lined the horizon, flags flying above nearly every vessel.

REPLACING STATE SONG: More song writers are stepping up with their offerings to replace “Maryland, My Maryland” as the state’s official song, writes Selene San Felice for the Capital Gazette.

25th ANNIVERSARY OF THE STREAK: Maryland Reporter and State Roundup don’t do sports, but there are exceptions for the exceptional. And so it was Sunday, when Tom Boswell, the Washington Post’s exceptional sports columnist, interviewed the exceptional Cal Ripken Jr. for the umpteenth time on the occasion of the 25th anniversary of Ripken’s 2131 game streak. Boswell says “which many, including me, regard as their favorite baseball memory,” and so say others who covered that game, including Baltimore sportswriting locals Pete Kerzel and Thom Loverro, who marked the day on Facebook. Thanks for the memories.

KOPEN KATCEF SEEKS SPJ PRESIDENCY: Sue Kopen Katcef is running for president, but Joe Biden and Donald Trump need not worry. Kopen Katcef, a longtime broadcaster and broadcast teacher from Annapolis, is running to be president-elect of the Society of Professional Journalists, the oldest professional organization for people in the news business, writes Len Lazarick for MarylandReporter.