HOGAN ACCUSES ALSOBROOKS OF VOTER SUPPRESSION: Add to the long list of dramas involving Maryland’s plan for the November election: Gov. Larry Hogan accusing Prince George’s County Executive Angela D. Alsobrooks of voter suppression, and the leader of the majority African American jurisdiction responding that Hogan (R) is not taking the health of her residents seriously, Rachel Chason of the Post reports.

OPINION: KEEP VOTERS SAFE: Reconfiguring Maryland’s April special election and June primary election to allow voters to stay safe and vote by mail was an enormous and difficult task, but voters turned out in droves. In an op-ed for the Sun, Joanne Antoine of Common Cause Maryland and Sam Novey of Baltimore Votes opine that that one “would assume that, with a pandemic still raging in our midst and the relative luxury of six months to prepare, Maryland officials would improve the process put in place in those elections and prepare for an even fairer, safer election in November. … that is not the case.”

POSTAL SERVICE LAGGING: Baltimore area Postal Service customers are standing in long lines to find out what is happening to their mail, which is not being delivered for days, weeks, months and sometimes never. And with vote by mail taking place, many are concerned about the election, Jean Marbella, Alison Knezevich and Emily Opilo report in the Sun.

OPINION: KEEP POLITICS FROM SCHOOL DEBATE: In a column for the Maryland Public Policy Institute, Carol Park writes that as school districts across the U.S. debate whether they should reopen schools or keep classes virtual for the fall semester, politics has unfortunately entered the debate. … Sadly, what happened in Maryland is similar to what is going on nationally.

SOME SPECIAL ED SERVICES IN CARROLL CURTAILED: When the Carroll County Public Schools system goes back into session with remote learning this fall, special education students will have many of the same services available to them, but not all. Shreeya Agarwal of the Carroll County Times reports.

LESSONS FROM ARUNDEL SUMMER SCHOOL: Naomi Harris of the Capital Gazette writes that what educators in Anne Arundel County learned from summer school lessons, which have been conducted remotely and were used as remedial learning in a short time span, will serve as a template when classes return in the fall.

HCC SHUTS CHILD ED CENTER: Howard Community College has closed its Children’s Learning Center in Columbia, prompting an outcry from parents who called the program a popular and educationally valuable experience, Jacques Kelly of the Sun reports. “Without warning, the HCC administration closed the center,” said Patrick Thronson, a Columbia resident whose two children were enrolled at the preschool.

COVID-19 UPDATE: Maryland reported 922 newly confirmed cases of the coronavirus and eight more deaths in the last 24 hours, as the state reported the most completed tests in a single day since officials began monitoring the pandemic in March, Phil Davis reports for the Sun on Sunday.

OPINION: HOGAN AMONG PANDEMIC LEADERS: The editorial board of the Post reports that responding to the disaster of President Trump’s failure to build a national system of diagnostic and screening tests for the novel coronavirus seven governors, including Gov. Larry Hogan, have taken matters into their own hands. Other governors and mayors should sign up immediately.

MD CHAMBER CHIEF: JOBS REPORT CONCERNING: Maryland Chamber of Commerce President and CEO Christine Ross said the numbers in the federal government’s latest jobs report are cause for concern because they call into question the extent to which the nation’s economy has recovered from months of coronavirus lockdowns. “The slowdown in job growth between June and July is concerning because it indicates that our economic recovery has plateaued or, worse, is faltering,” Ross told Bryan Renbaum of MarylandReporter.com in an email on Friday.

PUBLIC DEFENDERS SEEK UNION: Maryland’s public defenders have announced their intent to unionize. The lawyers and their support staff said unionizing will help ease the challenges of enormous caseloads and improve working conditions during the coronavirus pandemic in the courtroom and beyond, Emily Sullivan of WYPR-FM reports.

MD LEADS IN REDUCING EMISSIONS: Devashree Saha and Joel Jaeger, writing for the World Resources Institute, report that more than four-fifths of U.S. states have decoupled their emissions from economic growth, with Maryland leading the pack. Maryland reduced its emissions the most (38%), followed by New Hampshire (37%), the District of Columbia (33%), Maine (33%), Alaska (29%) and Georgia (28%).

SOME IN MO CO QUESTION USING TRAFFIC COPS: Rebecca Tan of the Post reports that as communities nationwide confront calls to “defund” and “unbundle” the police in the wake of the death of George Floyd in Minneapolis, some in Montgomery are asking: Should police even be in charge of traffic enforcement?

RACE & RACISM ON EASTERN SHORE: Jonathan Pitts of the Sun writes about a controversy on the conservative Eastern Shore: An email message that the superintendent of schools in Queen Anne’s County sent to parents at the end of the 2019-2020 school year listed achievements for the year and the dates of coming events. Then it pivoted by calling for more and better dialogue on racism in the county and voiced support for Black Lives Matter.

OPINION: WILL COVID KILL KIRWAN? Before COVID 19, the top agenda item of Maryland’s teachers’ union and their Democratic allies has been ramping up state spending to fund the Kirwan Commission’s K-12 education recommendations. But, writes Mark Uncapher for the Duckpin blog, “will the Maryland Education Association and their Democratic allies acknowledge COVID-19 budget realities and that their Kirwan Commission’s recommendations for increasing K-12 education spending have no realistic prospect of being funded now?” 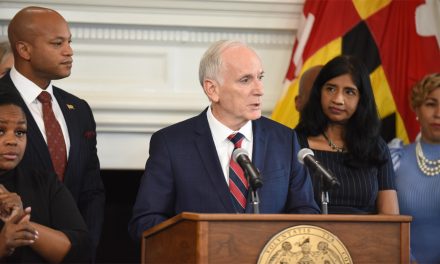