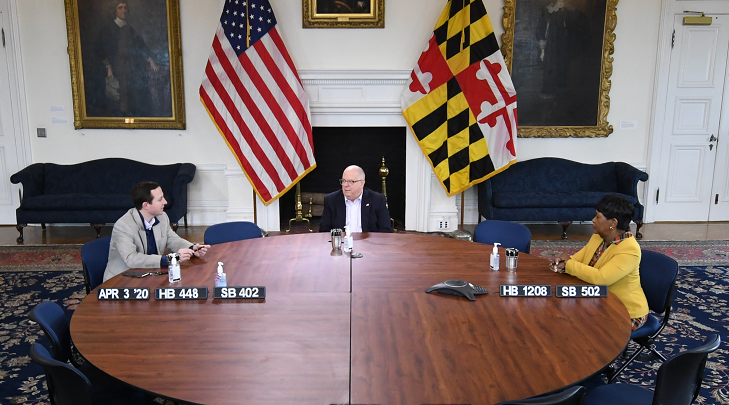 The last official bill signing April 3 was a lonely affair, compared to the usually crowded ceremony in the governor's reception room. Here are the socially distanced Senate President Bill Ferguson, Gov. Larry Hogan and House Speaker Adrienne Jones. Hogan allowed most of the new laws to go into effect without his signature. Governor's Office photo by Patrick Siebert.

FRANCHOT: 2nd STIMULUS VITAL FOR MARYLAND: Despite better than expected revenue projections for Maryland’s budget, Comptroller Peter Franchot said he is still very concerned about the state’s economic future and that federal assistance is needed. “… if there’s a second federal stimulus we could be in a better position than we thought we were going to be in. If there isn’t a second federal stimulus we’re in a deep hole,” Franchot told Bryan Renbaum of MarylandReporter.com on Wednesday.

FOCUS ON WORKING POOR, LOSS OF SAFETY NET: A panel of Maryland lawmakers is calling for a renewed focus on working poor and finding ways of preventing the sudden loss of social services benefits as a result of the coronavirus pandemic, Bryan Sears of the Daily Record reports.

POST SUPPORTS BALLOT QUESTIONS: A Post editorial supports the two statewide ballot questions. “The legislature’s unique budgetary impotence, and the state’s increasingly lonely ban on sports betting, are net minuses, “ the editorial says. “Two ballot questions this November aim to put the Old Line State in line with other states. That is a major part of the argument for both of them, … both could redound to the benefit of taxpayers.”

LOWER STUDENT TALLY MEANS FEWER SCHOOL DOLLARS: The exact enrollment numbers for Baltimore area school won’t be known for several weeks, but on Wednesday every school systems in the state will tally its students as part of an annual count required by state law. The decline is expected to be significant in some school systems — and unless state officials step in, the consequences for public school funding for next year could be devastating, Liz Bowie reports for the Sun.

BALLOT DROP-OFF BOXES ARRIVING: Starting this week, the first wave of what will eventually be hundreds of large ballot drop-off boxes are being stationed across Maryland, Jack Moore of WTOP-FM reports. Amid the coronavirus pandemic, many regular polling places are shuttered; and election officials are urging voters to vote by mail, even as there are deep concerns about sluggish delivery times by the U.S. Postal Service.

MTA NIXES PLAN TO CUT B’MORE BUS SERVICE: The Maryland Transit Administration will not move forward with a plan to cut inner-city bus service in and around Baltimore, Bruce DePuyt reports in Maryland Matters.The decision to reverse course on the wide-ranging service reductions followed pushback from commuters, employers, families with school-age children and political leaders.

CENSUS COUNT TO END OCT. 5: As a national legal battle over the 2020 census continues, the deadline for the once-in-a-decade count changed again this week — another abrupt twist for local officials trying to make sure Marylanders are counted. U.S. Commerce Secretary Wilbur Ross announced Monday that the census will end Oct. 5, reports Alison Knezevich for the Sun.

BA CO TEACHERS WORRIED ABOUT REOPENING: Some Baltimore County teachers are concerned about the district’s reopening plan, which wants to bring back students and teachers at separate day schools in November, making them the first group to return to the classroom. Kelly Yalfani is a music teacher at Ridge Ruxton School, whose students have disabilities and underlying conditions that make them more vulnerable to COVID-19, Ray Strickland reports for WMAR-TV.

CARROLL TEACHERS’ STRESS ‘THROUGH THE ROOF:’ Mike Hellgren of WJZ-TV reports that the president of the Carroll County teachers union says educators remain concerned about their safety—with many scheduled to return to the classroom Monday and some students coming back for in-person instruction two weeks later. “Their anxiety levels and stress levels are through the roof,” said Teresa McCulloh of the Carroll County Education Association.

B’MORE TEACHERS PROTEST RETURNING TO CLASSROOM: Several teachers in Baltimore City are against potentially returning to the classroom anytime in the near future, Tre Ward reports for WBAL-TV. The Baltimore Teachers Union held a rally outside of the school district’s headquarters Wednesday evening.

HUD PROBE CLEARS CARSON: The inspector general’s office for the U.S. Department of Housing and Urban Affairs released an investigative report Tuesday that found no evidence that HUD Secretary Ben Carson used his position to benefit his son’s business interests in Baltimore, but he “could have done more to avoid the appearance that he was not complying with federal ethics regulations,” Meredith Cohn of the Sun reports.